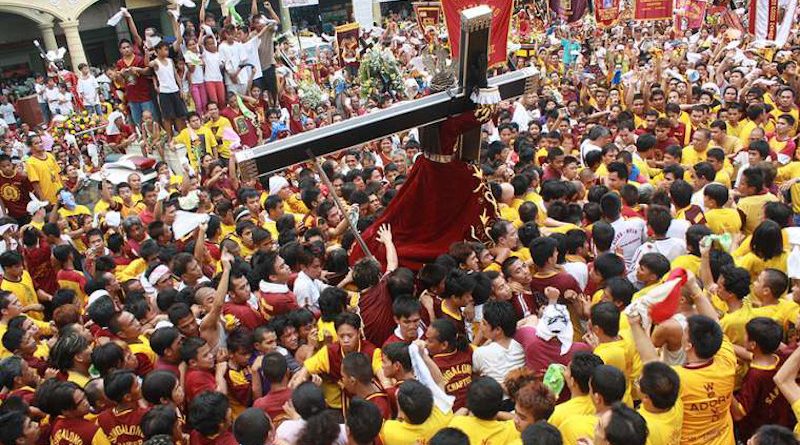 Procession of the Black Nazarene in Manila, January 7, 2010. Credit: Denvie Balidoy/Flickr (CC BY 2.0)

Filippino churches and authorities will limit attendance for the Masses of the Black Nazarene – one of the country’s largest series of events, which usually gathers millions of people to Manila each year.

The Quiapo Church has instilled a 400-person cap for each of the 15 Masses that will take place on the Jan. 9 feast. This means only 6,000 will be able to attend services inside.

The parish is currently operating under the general community quarantine restrictions, which require religious services to limit capacity to 30 percent. Church officials attempted to expand the capacity to 50% but were denied.

“I hope we can just consider allowing at least 50 percent for more people to be accommodated inside the church and we are making sure that there is social distancing inside,” Fr. Douglas Badong, assistant pastor of Quiapo Church, told ABS-CBN.

Instead of kissing the statue, a practice also known as pahalik, attendees will be able to venerate and pray with the statue, which will be visible on the church’s balcony.

“Instead of pahalik, there’s what we call paying tribute. We put the image of the Nazarene outside so people can pay a visit 24/7 wave their handkerchiefs as tribute to the Black Nazarene,” Badong said, according to ABS-CBN.

The priest discouraged attendees from bringing large replicas of the statue, which, in the past, have been processed on trucks. He said smaller images were fine.

Bishop Broderick Pabillo, apostolic administrator of the Manila archdiocese, will celebrate the first Mass at 4:30 a.m. and Msgr. Hernando Coronel, rector of Quiapo Church, will preside over the last Mass at 10:15 p.m.

According to the authorities, people under the age of 15 or over the age of 65 will not be allowed to attend, CNS reported.

Church officials are working with government authorities to help stop the spread of the virus, such as the development of quick response codes to track outbreaks. Father Badong encouraged devotees to participate in the event safely and with compassion for others.

“Let’s observe discipline and care for each other. Don’t be overcome by stubbornness on this day,” he told ABS-CBN. “Even though there’s no procession, the celebration continues. We can only count on the Black Nazarene.”

Known as the traslacion, the 19-hour procession through the streets of Manila takes place each year on Jan. 9. Millions of pilgrims take part in the 7-kilometer procession.

In October, civil and ecclesial authorities in the Philippines agreed to cancel the Black Nazarene celebration in 2021.

The statue of the Black Nazarene is a kneeling Christ cloaked in a maroon robe and crowned with thorns. The life-sized statue bears a cross.

It was brought to the Philippines by Augustinian missionary priests in 1606. The statue is believed to have acquired its black color after being partially burnt when the ship carrying it caught fire on a voyage from Mexico.

Since then it has survived fires that destroyed its host church twice, two earthquakes, floods from numerous typhoons and bombings during World War II. The image is normally enshrined in Manila’s Minor Basilica of the Black Nazarene, popularly known as the Quiapo Church. Many miracles have been reported in connection with veneration of the statue.