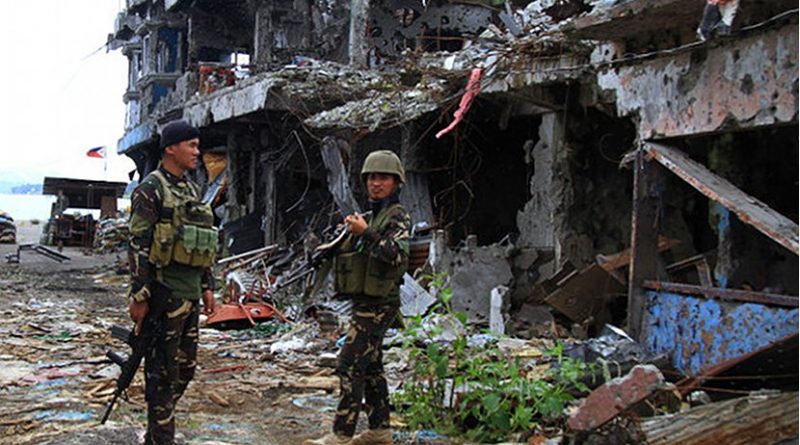 Military intelligence sources told BenarNews that Najib and his men managed to cart with them up to 500 million pesos (about US$10 million) they stole from banks and businesses as the city fell into chaos.

Col. Romeo Brawner, deputy commander of Task Force Ranao that has jurisdiction over Marawi, confirmed that the military has received information about Najib’s ascension to the enemy leadership.

“The matter is subject for verification that Abu Dar is the new IS leader after Hapilon was killed in Marawi,” Brawner said.

Najib was born in Mindanao but studied at an Islamic school in the northern Philippines, according to studies made by security analyst Rommel Banlaoi of the Philippine Institute for Peace, Violence and Terrorism Research.

Najib was reported to have undergone explosives training in Afghanistan in 2005, before returning to Mindanao in 2012, when he founded the militant group Khilafa Islamiyyah Mindanao (KIM), which operated in areas near Marawi.

Najib would later facilitate the entry of foreign fighters in Mindanao, putting them up in areas near Marawi and laying the groundwork for the eventual siege of the only Islamic city in the predominantly Catholic nation last year.

“In May last year he was among the leaders who planned the (Marawi) attack,” Banlaoi said, adding that a classified military video seized from Marawi showed Najib seating beside Hapilon during the planning stage, indicating that he was part of the militants’ inner circle.

The Marawi siege took the Philippines by surprise, and embarrassed President Rodrigo Duterte and his top security officials who were in Moscow as the country’s most serious security crisis unfolded.

The gunmen carried out attacks across Marawi, forced residents to flee, destroyed the city’s Catholic Church, killed Christians and held dozens of hostages, including the city’s priest, women and children.

Hapilon was backed by Filipino fighters from the Maute group, led by Omarkhayam and Abdullah Maute, local radicals who are believed to be the cousins of Najib, military sources told BenarNews. Fighters from Southeast Asia and the Middle East who had earlier managed to sneak into Marawi also enlarged the enemy strength.

Duterte, who had admitted that the militants’ force overwhelmed the local military, was forced to seek assistance from longtime military allies the United States and Australia.

Marawi’s estimated 200,000 residents fled, and much of the once picturesque city was flattened by successive air raids. Five months after the battle ended in October, many of the residents have remained in evacuation sites as a large parts of Marawi remained in ruins.

The fighting, the worst in recent memory, left at least 1,200 people dead, most of them militants.

The entire south however remains under extended martial law, with President Duterte saying up to 200 militants who escaped from Marawi remained at large in Mindanao.