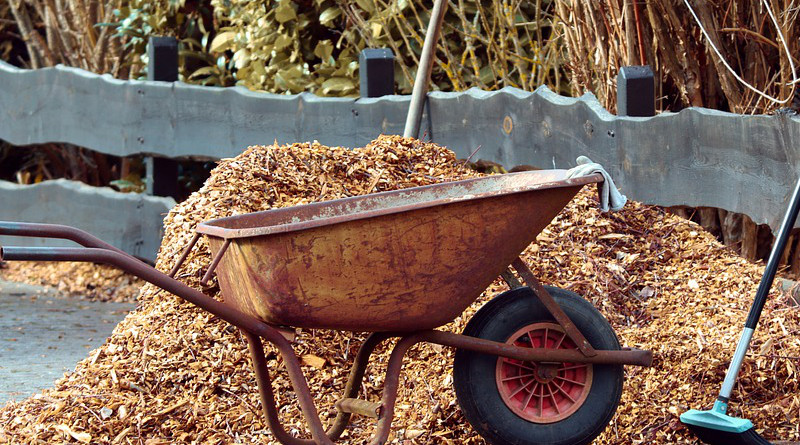 The warning was raised, and it is worrying farmers.

“There will be a 75-80 percent chance of El Nino from January to March”, the  UN World Meteorological Organization (WMO) aired in a harbinger forecast.”

With temperatures rising and water sources diminishing, some farmers here are leaning on an age-old farming system that has passed the tests of time for centuries, to eke out a harvest from their crops.

Farmer Einstien Sibanda and his fellow farmers call it the “God’s Blanket.”

“God’s  Blanket” is mulch, an old lesson for a new problem. “It is anything organic that is used to cover the soil around crops , plants and trees,” food security consultant Sam Adams said, “it is anything from grass, hay, bark,  ricestraw, leaves, stubbles, pine needles , sawdust to woodchips.”

The practice was used as early as the Biblical times in Egypt, Babylon, Mesopotamia, and as far as India where even seaweeds and seagrass were used as mulch. The English word “mulch” is derived from the German word “molsch”, meaning soft, beginning to decay.

Its purpose is more appropriately described by Sibanda : ”Mulch keeps the soil temperature equal, warm but not hot, and preserves the water moisture for a long time.”

The effect of mulch upon soil moisture content is complex. Mulch forms a layer between the soil and the atmosphere preventing sunlight from reaching the soil surface, thus reducing  evaporation.  It  is often applied in late spring/early summer when soil temperatures have risen sufficiently, but soil moisture content is still relatively high. It  primarily modifies the effects of high temperature.

Adams  explained, “crops during their critical vegetative to fruiting stages,  are able to make use of water and moisture in the soil fully as these are prevented from evaporating by the mulch, until the time the crops like cereals like corn or legumes like beans fully develop in one cropping period.” “It also prevents weeds from growing, thus cutting labor costs, and allows better nutrient uptake because soil is improved, “ he added.

Nitrous oxide emitted from soil accounts for one half of agriculture emissions that contribute to global warming. Emission levels are often higher in agricultural soil due to the use fertilizers and manure.

Mulched soils become a habitat of microorganisms, when it does, soil health is improved and therefore in yields and profits, Adams who teaches conservation farming in South Africa said.

Many farmers are starting to realize this, mulch protects soil from erosion, absorbing the impact of heavy rain, slowing down the water, which otherwise could cause topsoil erosion. As a result, more water is absorbed  gradually by the soil and to a deeper soil depth.

Plants then receive more water. As mulch protects the soil from temperature extremes and evaporation from hot weather, it insulates the soil from both hot and cold weather.

Due to global warming most soils result to “baking” from high temperatures and forming a hard crust, but mulch prevents this phenomenon. Mulched soils always remain loose and friable making plowing unnecessary. Mulch soil is light, rich in humus and organic matter.

Mulch prevents light from reaching the soil thereby discouraging the germination of weed seeds. This means there are fewer weeds to remove from the ground ensuring water and nutrients go straight to the crops because there is no competition from weeds.

These are the reasons why farmers in South Africa consider mulch, God’s blanket.

And aptly so. Soil, perhaps humans’ greatest resource is endangered more so now by climate change, yet the Maker has provided ways of saving it.

There is no need to wonder why George Floyd (age 46) was murdered in broad daylight in Minneapolis, Minnesota, on

To The Commercial Heavens We Go! SpaceX, NASA And Space Privatization – OpEd