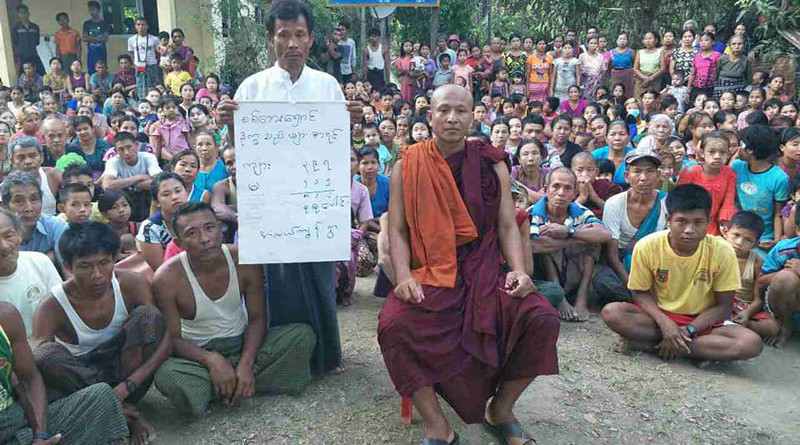 More than 800 internally displaced people (IDPs) who are sheltering at a monastery in Alae Gyun village, Ann Township, are facing food shortages as donors shy away from inspections required to access the war-affected population.

The camp has enough rice for only a few more days, after which they will likely lack food if there are no additional donors, said an IDP.

“We do not have donors because of transportation. We have some rice bought with previous donations. No one can come and provide foodstuffs and utensils in person,” she said.

The crimping of humanitarian supplies is a relatively recent problem, IDPs said, with donors previously providing rice or cash contributions without the kind of reticence that is now holding back provisioning.

Ko Myo Lwin, who is assisting at the Alae Gyun camp, said the number of donors to the monastery has decreased as prospective aid suppliers balk at restrictions put in place.

“There are checkpoints at Ann,” he said. “The gate of the army troops does not allow rice to be carried [into the camp]. Yaw Chaung is another path to come to the monastery, but passersby are also checked there. So, donors do not come to us.”

In addition to an impending food shortage, lack of healthcare access is an issue, IDPs said.

The IDPs taking shelter in the Alae Gyun monastery fled their homes after artillery shells landed in the village last month.

Fighting between the Tatmadaw and the Arakan Army has been intensifying in Arakan State over recent months, with more than 160,000 people displaced by conflict.

For recreational fishing enthusiasts, the thrill of snagging their next catch comes with discovering what’s hooked on the end of