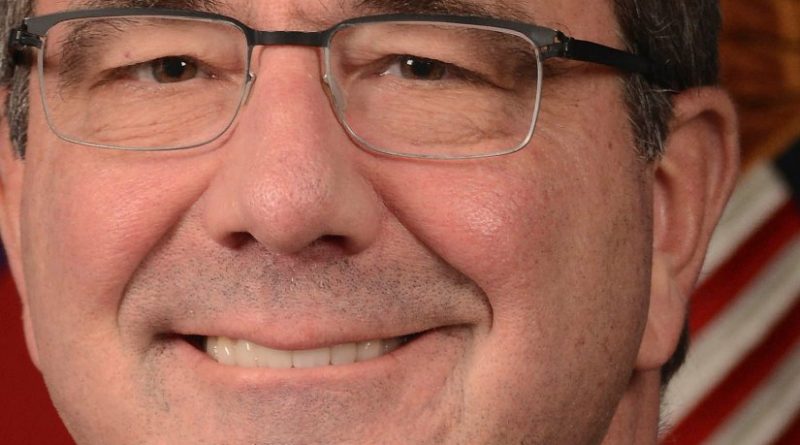 United States' Ashton B. Carter. Source: US Department of Defense.

The visit of US Defense Secretary Ashton Carter to India (June 4) has resulted in a modest $2 million agreement that includes relatively low-end equipment such as protective clothing and battlefield generators. Concurrently, Dr. Carter and his Indian counterpart Defence Minister Manohar Parrikar extended the bilateral defence cooperation agreement mooted in June 2005 by another decade.
However, more than the fiscal value of the deals that have been inked – the strategic context in which the Carter visit has taken place and the issues that have been identified for further deliberation and potential bilateral cooperation, are of much greater long-term import.
Dr. Carter came to India after attending the Shangri-la dialogue in Singapore where China and the South China Sea imbroglio was the main issue under contested scrutiny between Washington and Beijing. Tangled territoriality and divergent interpretations of the existing legal provisions by the claimants – namely China and some of the ASEAN (Association of Southeast Asian Nations) states – has resulted in a tense impasse, and the more muscular Chinese response has caused predictable anxiety among the smaller regional states.
Thus the Carter visit has been mis-perceived in some quarters as an attempt by the US to knit an anti-China coalition and that India would play a central part in this endeavor. This is misleading and such a binary policy approach either by the US or India in relation to China is invalid.
If the current macro-economic trajectory of the global order is to be sustained – these three nations (and the EU) have no option but to be yoked together, however uneasily. Yes, all three nations have deep concerns about the ‘other’ – the US and India in relation to China and conversely – Beijing is wary of a close India-US defence partnership.
Neither is the democratic duo devoid of dissonances. India and the US have not engaged in an appropriately candid manner about the emerging strategic framework in Asia – and the engagement has been more tactical in relation to Pakistan and terrorism, and on occasion – Iran. China is the big dragon-cum-panda in the Asian drawing room (depending on whether it is seen as a military menace or an economic enabler) and both the US and India have to arrive at an appropriate framework in which to concurrently engage and restrain China.
The India-US relationship is itself undergoing a transmutation – from the nuclear estrangement of the pre-2008 period to one of wary engagement. The analogy is that of two self-righteous porcupines getting to know each other – very carefully – one quill at a time!
The Indian Ministry of Defence (MoD) under the Congress-led United Progressive Alliance (UPA) dispensation had its own reticence about engaging with the US and this has permeated the tentacles of the defence/military bureaucracy. Consequently, institutional mistrust and a deeply ingrained reluctance to candidly engage with their counterparts prevails in both the DoD-Pentagon and the Indian MoD- military HQ.
These are the deeper issues that the Carter visit has tangentially identified for further deliberation and hopefully this in turn will allow for a more objective assessment about what constitutes ‘sufficiency’ by way of tangible trans-border military capability that India needs to acquire over the next decade.
Whether India needs more fighter aircraft, artillery guns, mountain strike corps; or aircraft carriers and nuclear submarines – or none at all – and can invest in cyber and space assets to acquire that level of ‘sufficiency’ to underpin its strategic autonomy is an exercise that Delhi has to embark upon.
The US can be a valuable partner in this effort and Carter brings immense experience to the table by way of having extensively dealt with the octopus like bureaucracies and their deeply entrenched certitudes in both nations.
What constitutes the appropriate index of military sufficiency to ensure that the Asian strategic framework is not imbalanced and exudes the kind of Goldilocks equipoise that accommodates the legitimate interests of the US, China and India is the long-term challenge for all three nations.
The Carter tour through Asia and the brief Indian visit is the tip of this early 21st century strategic iceberg. The challenge for Indian Defence Minister Parrikar is to inject the political traction and institutional determination to identify these opaque and contradictory contours and evolve a sustainable response – an objective that has eluded South Block for over a decade.
*C Uday Bhaskar is Director, Society for Policy Studies, New Delhi. He can be contacted [email protected]