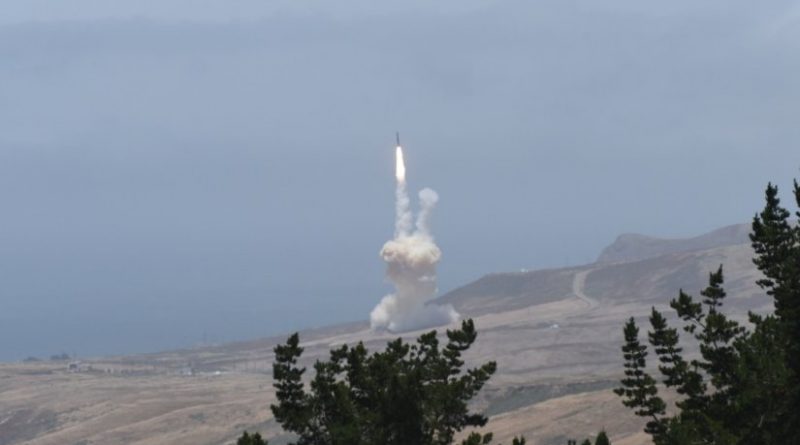 It was all smiles out on the range when, against a deep blue sky, an American interceptor rocket took out on May 30 an incoming “enemy” long-range, missile (which in a real attack would be carrying a nuclear warhead). Generals and Congressmen and women jumped for joy.

But what was there to be joyous about? Over the decades of the Cold War the nuclear deterrent was supposed to be the instrument that kept the peace. MAD, it was called- Mutually Assured Destruction.

Simply put, if you attacked me you might catch me by surprise and destroy many of my cities and military bases, but in fact you wouldn’t dare do it because beyond surprise is my “second-strike force”. Hidden away, deep underground, invulnerable to attack, I can retaliate with that.

So in real life you will not dare attack me and I won’t attack you. That is a stalemate. That is deterrence. Forget morality, forget the chance of a rogue or accidental launch – this is what the military say kept the peace throughout the Cold War, and maybe still does as the ice cap returns, argue its supporters.

However, if there is now going to be a big jump in technology and you can intercept my second-strike with your interceptor rockets we no longer have the surety of MAD. I’m wide open and you can “get me”. You no longer fear retaliation and I will have no choice but to surrender after you have demolished some of my cities and military bases.

Fortunately, the technology is still in its early stages. This success came after a number of failures. It was done on a windless day. Moreover, the “enemy” had fired only one rocket not thousands. This gives us a little time to abolish this counterproductive development.

Just the fact that this new technology is being worked on returns geopolitical rivalry to centre stage. If a country fears this is going to be the unstable world of the future then countries will go out of their way to build alliances and to ceaselessly work to undermine the status of their opponent.

We see this already, with what is going on in Ukraine, with Moscow’s effort to cosy up to Beijing, the expansion of NATO, with President Donald Trump warming up relations with the Chinese president, Xi Jinping, and, until Trump became president, with the increase in savage personal criticism of each side’s leadership. (It could be argued that Trump is trying to calm this possible escalation of confrontation by refusing to publically support Article 5 of the NATO constitution at the recent NATO summit.

This made the Europeans extremely fretful, fearful that it meant that the U.S. was pulling back its commitment to come to their defence if attacked- but that is just conjecture on my part, which I cannot prove.)

The next step will be for both Russia and the U.S., if they feel that it is becoming easier to be successfully attacked, “then they need to deploy more capable retaliatory arsenals to counter the growing risks[JP1] ”, as Keir Lieber succinctly puts it in the current issue of Harvard University’s “International Security”. The future suggests there will be no more ceilings or cuts in nuclear weapons, as has happened in stages over many decades. It will be the reverse- a new build up.

Two things need to be added to this analysis. First, that Pakistan and India could have similar problems. So could China and the U.S., (but China has only a small armoury of nuclear weapons).

Second, this rocket that can blow up an incoming rocket high in the sky is not the only modern development that can tear a big hole in deterrence.

These days conventional weapons which can be hidden away and moved quite easily have become able to destroy nuclear silos and sites. Above a certain size silos cannot be hidden away from satellites because of the amount of heavy equipment needed to construct them. More hardening of the silos is likewise difficult. Cyber-attacks on command and control and the silo operation itself will start to happen, as the technology develops.

The accuracy of missiles is increasing fast – more silos or submarines may suffer a direct hit. Low-yield nuclear weapons that can cause less civilian fatalities may make policy-makers less inhibited about using them. Improvements in remote sensing, data processing and communication may make nuclear missile-loaded submarines more vulnerable. The fast increase in deployment of satellites has revolutionised the ability of a would-be attacker to find out what is exactly going on on the ground, even at night.

All these scientific and technological developments are eating away at MAD.

The only way to avoid an imbalance that can lead to a civilisation-destroying strike is to get rid of these weapons now. Before long the window of opportunity will be closed. [IDN-INPS – 6 June 2017]

Note: For 17 years Jonathan Power was a foreign affairs columnist for the International Herald Tribune. He has forwarded this and his previous Viewpoints for publication in IDN-INPS. Copyright: Jonathan Power.

One thought on “Forward To A Mad Cold War With New Nuclear Technologies? – OpEd”