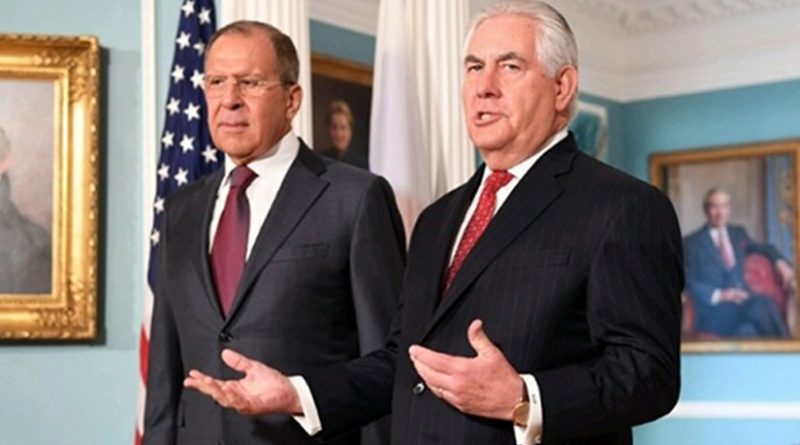 A June 1 MSNBC segment with the longtime neocon US government civil servant Daniel Fried touched on the Deep State mindset of taking matters into its own hands. Towards the end of this feature, Fried somewhat evaded a question on whether it’s okay for people within the US government to leak information against the American president?

Fried gave a vaguely measured response that acknowledged the ideal to serve a constitutional oath (of loyalty to the president), adding that the president should consider all options. He further said that it’s wrong to lift sanctions against Russia. Fried didn’t sternly condemn the kind of leaks which have occurred against Trump – leaving open the possibility of tacitly okaying this manner, by rationalizing that Trump hasn’t considered all options, in conjunction with the belief that a hardline on Russia is well premised.

Elsewhere, the talk of lifting these sanctions has been limited to the return of privileges for Russian government personnel in the US – taken away by Barack Obama in his last days as US president. Obama’s stated reason was on account of a still inconclusive claim of Russian government meddling in the 2016 US presidential election.

The US mass media overview of Putin’s recent reference to the possibility of patriotic Russian hackers doing in the Democratic National Committee (DNC) was predictably one-sided in its convoluted spin – which included the take that Putin was giving a half assed acknowledgement of Russian government culpability, because he knew that the evidence for such is mounting.

Contrary to what MSNBC and CNN suggestively emphasized on June 1, Putin doesn’t control everything in Russia. Therefore, it’s not inconceivable that patriotic hackers (as he termed it) might’ve attempted to hack the DNC. For several years prior to the leaked DNC emails, non-Russian government hacking from Russia had already been acknowledged.

To date, there’s no clear proof that the leaked DNC emails involve (in one way or another) the Russian government, with a counterclaim that these correspondences were released by someone within the Democratic Party to WikiLeaks. The DNC was lax in having poor security measures, while relying on a partisan and suspect CrowdStrike internet security provider, given its partisan affiliation with the Atlantic Council. The DNC exhibited reluctance to turn their server over to the FBI. In turn, some in US Intel and mass media appeared all too willing to accept the DNC-CrowdStrike claim of Russian government complicity prior to a full fledged investigation.

In the US, talk of a Donald Trump-Russian government collusion against Hillary Clinton gets more attention than some other possibilities. Cyber-security developer John McAfee said: “If it looks like the Russians did it, I can guarantee you it was not the Russians.” There’s a wave of anti-Russian sentiment, as evidenced by the lack of US mass media and body politic condemnation to former National Security Agency (NSA) Director James Clapper’s bigoted anti-Russian comment.

The subject of anti-Russian propaganda brings to mind the pro-Kiev regime leaning Atlantic Council and its cyber-security member CrowdStrike. Entities like them are silent in instances like when Ukrainian President Petro Poroshenko falsely stated that Jews in Crimea are prohibited from observing their faith, since that area’s reunification with Russia.

The mantra about 17 US security agencies saying that Russia hacked the DNC is questionable. No conclusively clear specifics have been released. There has been inconsistency with the NSA (the branch heavily involved in this matter) expressing a less enthusiastic belief (that the Russian government hacked the DNC as claimed) than the other agencies  – most of whom aren’t as involved in the matter (if some of them are even actually involved at all).

It’d be quite appropriate for the Trump administration to lift the sanction concerning Russian government personnel in the US, as well as the others against Russia. At the time of Obama’s announced action against these Russians in the US, Russian President Vladimir Putin masterfully said that Russia wouldn’t reciprocate (against US government personnel in Russia), since Obama would soon be leaving office. Putin was exhibiting a patient willingness for change in the US. Trump had noted this in a Tweet, which lauded Putin’s move.

Given the neocon/neolib influenced Russia takes in the US, it’s realistic to believe that for now, any lifting of the sanctions against Russia, will be limited to re-granting the suspended Russian government personnel privileges in the US. A successful John McCain, Lindsey Graham, Marco Rubio led bellyache against that move, could very well result in a Russian reciprocal move against US government personnel in Russia – with Trump having an I told you so moment.

As for the other sanctions, Fried and some others bring up Russian behavior in Ukraine (the former Ukrainian SSR to be precise), as a continued basis for penalizing the Kremlin. Ukraine isn’t in NATO and the Kiev regime is far from virtuous. It continues to be hypocritically absurd to righteously speak out against Crimea’s territorial changeover back to Russia (clearly supported by a well over 2/3 majority in Crimea), without expressing opposition to Kosovo’s separation from Serbia and Turkey’s role in keeping northern Cyprus separate from the rest of the island nation.

Let’s get real, Russian involvement in eastern Ukraine isn’t the first instance of one country involved in another. Any Russian government action in eastern Ukraine aside, that area has serious issues with the Kiev regime. It’s unreasonable for Russia to stand by in the event of a Kiev regime Operation Storm like action (as advocated within some Kiev regime elements) that would spillover to Russia, in the form of refugees – something that has happened as is.

Exxon Mobil isn’t the only Western based entity which isn’t so pleased with the sanctions against Russia – thereby refuting any notion that the sanctions only cause problems for Russia. Though mutually inconvenient to Russia and some others, the sanctions haven’t influenced Russia to change course to the desire of Fried and his ilk. Nor does that seem so likely to be the case in the foreseeable future.

Russia has a track record of success against far greater obstacles. I recall the not so Russia friendly US based academic Angela Stent (during a CSPAN televised gig not so long ago) acknowledge the Russian view that the sanctions at play have actually served to bolster Russia’s agriculture. There’re some other upbeat signs for Russia as well, noted by Putin in his recent panel appearance with NBC host Megyn Kelly (along with Indian Prime Minister Narendra Modi, Austrian Chancellor Christian Kern and Moldovan President Igor Dodon) at the St Petersburg International Economic Forum. A June 1 Foreign Policy Research Institute article is pretty much in line with Putin’s contention.

*Michael Averko is a New York based independent foreign policy analyst and media critic. A closely related version of this article was initially placed at the Strategic Culture Foundation’s website on June 6.

One thought on “Sanctioning Russia – Analysis”