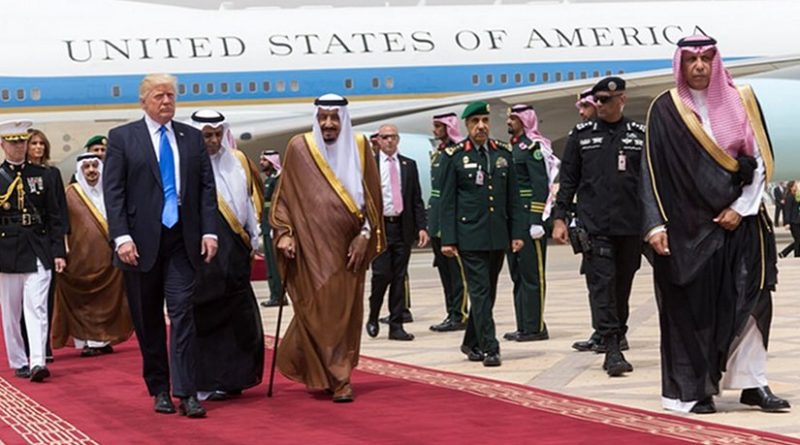 By Joyce Karam and Aisha Fareed

Donald Trump on Tuesday waded into the Gulf diplomatic crisis, throwing his support behind the move by Saudi Arabia and several other nations to cut ties with Doha, saying the move could “be the beginning of the end to the horror of terrorism.”

Saudi Arabia, the UAE, Egypt and several other states earlier this week moved to sever diplomatic ties with Doha over its alleged support for extremist groups.

In a series of tweets, Trump said: “During my recent trip to the Middle East I stated that there can no longer be funding of Radical Ideology. Leaders pointed to Qatar — look!”

“So good to see the Saudi Arabia visit with the King and 50 countries already paying off. They said they would take a hard line on funding extremism, and all reference was pointing to Qatar.”

Trump added: “Perhaps this will be the beginning of the end to the horror of terrorism!”  Analysts told Arab News that the US president’s apparent support for the move against Qatar adds pressure on Doha.  “Trump’s tweets slam the door shut on the Qatar’s final hope: that American mediation would give it a face-saving way out without having to make too many compromises,” said Hussein Ibish, a senior resident scholar at the Arab Gulf States Institute in Washington.

Amid the ongoing and unprecedented crisis, it emerged on Tuesday that the leader of Kuwait — a mediator in the Gulf dispute — had traveled to Jeddah for talks.  Saudi King Salman on Tuesday received the ruler of Kuwait, Sheikh Sabah Al-Ahmad Al-Sabah, who flew to Jeddah in a bid to negotiate an end to the diplomatic standoff between Qatar and its Gulf neighbors.

Amid the ongoing dispute with Doha, Saudi Arabia’s foreign minister said on Tuesday that Qatar must take several steps, including ending its support for the Palestinian group Hamas and the Muslim Brotherhood, to restore ties with other Arab states.

Adel Al-Jubeir said Qatar knew exactly what to do to restore relations with Riyadh and its Arab allies.  “We want to see Qatar implement the promises it made a few years back with regard to its support of extremist groups, (and in) regard to its hostile media and interference in affairs of other countries,” Al-Jubeir told reporters in Paris.  “Nobody wants to hurt Qatar. It has to choose whether it must move in one direction or another direction.”

Qatar, meanwhile, said it is open to mediation to resolve the crisis, according to its foreign minister.  “We are willing to sit and talk,” Sheikh Mohammed bin Abdulrahman Al-Thani said Tuesday in an interview with CNN’s Becky Anderson.  He said the “progressive and modern” country believes in diplomacy and promoting peace in the Middle East.  “We are not a superpower here, we are not believing in solving things with confrontation,” he said.  Al-Thani insisted his country was combating terror financing and “protecting the world from potential terrorists.”

“We are courageous enough to sit and talk about it to change the course,” Al-Thani said. “But if there is any intervention in our affairs or intervention to change our policy because it’s contradicting with other policies in different countries, this is not going to happen.”

Earlier Tuesday, Jordan said it will downgrade its diplomatic representation with Qatar after examining the “cause of the crisis.”

One thought on “Trump Weighs In On Gulf Diplomatic Rift”

Occupied Palestine: In The Shadow Of The Pandemic – OpEd

The situation in Palestine is grim. Unemployment levels are alarmingly high – 121,000 Palestinians lost their jobs in the wake