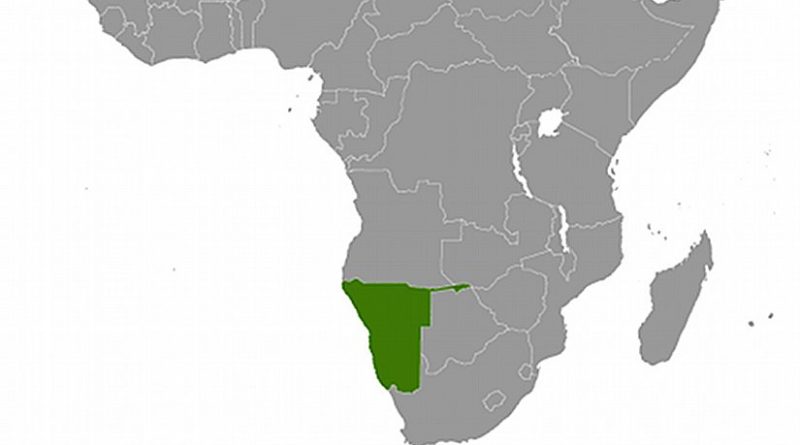 Since January 2015, there has been much talk in the media about China’s efforts to establish a military base in Namibia. It is reported that the Namibian ambassador to China held talks with Chinese military officials about construction of a naval base in Port of Walvis Bay. However, Chinese and Namibian authorities had denied this news, as stated and declared by Chinese defense minister on Agence France-Presse in January 2015. Apart from this media controversy, Namibia is one of many African countries that have close ties with China. Those ties exist at different levels in the political and economic domains, as well as that of military and security.

China between SWAPO and the issue of Walvis Bay

Namibia was under the control of the German Empire after 1884, but became subject to the Republic of South Africa by a decision of the League of Nations after the end of World War I. In 1958, SWAPO “South West Africa People’s Organization” was created to fight for in dependence of Namibia. During the same period, the organization sent volunteers for military training in China[1].

When the issue of Namibian independence was posed at the United Nations in 1971, Beijing supported Namibia’s claims for separation from South Africa. Moreover, China sought to strengthen its influence in southern Africa after the military coup in Portugal in 1974ended the European country’s presence in Angola, Northern Namibia, and Mozambique. In 1973, China voted for United Nations General Assembly’s resolution that would recognize “SWAPO” as the legitimate and sole representative of the Namibian people, and supported its negotiations for independence. However, the status of Walvis Bay Port was the biggest obstacle in the negotiations during this period-the Western Contact Group (US, United Kingdom, France, West Germany, and Canada) called for a self-determination referendum in Namibian January 1977, but South Africa refused to do so, and instead maintained sovereignty over the port of Walvis Bay[2].

In fact, although the UK was part of Western Contact Group, the port was subject to the British Navy. During this time, the UK was defending its strategic naval sites around the world, such as those in Cyprus, Gibraltar, Kenya, the Suez Canal, Aden in South Yemen, and the Falkland Islands south of Argentina. These ports were increasingly important for Britain as it faced the rise of the US Navy following the end of World War II. Meanwhile, China insisted on South Africa’s withdrawal from Walvis Bay Port.

Independent Namibia and the geo-economic interests of China

Namibia obtained its independence from South Africa in 1990, and was recognized by China on 20 March of the same year. China and Namibia established diplomatic relations forthwith on March 22, 1990, as they signed agreements on economic and technical cooperation. But despite the independence of Namibia, the port of Walvis Bay remained under control of South Africa until Nelson Mandela came to power and handed over the port to Namibia in 1994.

Sino-Namibian relations have developed extensively after the visit of the Namibian president to China in 2005 and the opening of the Namibian embassy in Beijing. This period was marked by China’s interest in developing cooperation with Namibia in the fields of tourism, education, health, investment in energy and metals, media and communication, as well as in the infrastructure sector. In particular, investment in uranium is one of the most strategic economic drivers of China’s interest in Namibia, since Beijing has a program to build more than 100 nuclear reactors in the future. Furthermore, China has started working on energy exploration in northern coast of Namibiain recent years.

This development of China’s economic and trade relations with Namibia has also motivated Chinese businessmen to set up an export area surrounding Walvis Bay. Furthermore, this port is also considered as a key that connects Chinese interests with both Botswana and Zimbabwe, neither of which possesses access to sea. The development of these economic relations has resulted in the settlement of a large Chinese community in Namibia.

In fact, the geo-economic importance of Walvis Bay port has caused a lot speculation about China’s ambition to create a naval base in the port, including speculation from the Namibian media which stated that 2,600 tons of military material has reached the harbor, arguing that it was destined for Zimbabwe. Regardless of the accuracy of these analyses, it is reasonable to discuss future scenarios regarding the “Port” since Chinese-Namibian military relations are growing rapidly. China has trained many military cadres from Namibia in the military academy of Shanghai. It also built the Namibian military academy and military museum in Okahandja. Furthermore, it is important to note that China has also set up a station for space research in the city of Swakopmund, which is not far from Walvis Bay, which works in coordination with other Chinese stations at the Port of Malindion the Kenyan coast and the Port of Karachi in Pakistan. Some American studies have argued that those stations are being used for military purposes.

Since January 2015, mutual visits between Chinese military officials and their counterparts from both Namibia and Angola have become more frequent. On March 30, 2015, Chinese Minister of Defense Chang Wanquan visited Namibia, and then Angolan Minister of Defense João Lourenço paid a visit to Chinaon September 21, 2015, directly followed by a visit of Namibian Minister of Defense Hon Penda Ya Ndakolo on September 22 of the same year, The Angolan Defense Minister visited Chinaagain in February 2016. So, it seems that there is a rivalry between Namibia and Angola regarding military relations with China as the two countries vie to developthe port Walvis Bay and the Luwanda port, respectively, as a Chinese strategic naval position in the South Atlantic.

After all, we can track Chinese military relations in Africa to argue that Beijing has confirmed its military presence in the Western Indian Ocean by establishing a military base in Djibouti and building a special relationship with Kenya. However, due to escalating US pressure on China in South China Sea and growing interest in the economic benefits in Antarctica, China is now looking to secure its military presence in the South Atlantic, and is therefore working to strengthen military ties with Namibia and Angola. Inescapably, China will require Walvis Bay Port in Namibia for military purposes, to use it as a private naval base, or as a multi-tasking logistical port.

But the challenge for China is how it will deal with Brazilian naval strategy on one hand, which announced that the security of the region relies upon countries bordering the South Atlantic Ocean, and Britain’s stance on the other, since it has a presence on many islands in the region.