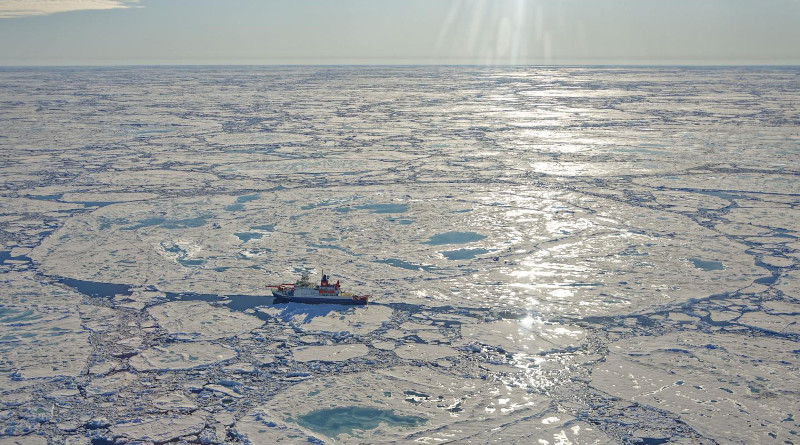 The New Siberian Islands were the birthplace of the MOSAiC floe: the sea ice in which the research vessel Polarstern is now drifting through the Arctic was formed off the coast of the archipelago, which separates the East Siberian Sea and the Laptev Sea to the north of Siberia, in December 2018.

Sediments, and even small pebbles and bivalves, were incorporated into the ice during the freezing process, which the on-going melting process has brought to light on the surface of the MOSAiC floe. This is an increasingly rare phenomenon as nowadays most of the “dirty ice” melts before it even arrives in the Central Arctic. These are among the main findings of a study that MOSAiC experts have published now in the journal The Cryosphere, and which will provide the basis for numerous upcoming scientific assessments.

At first glance, it looks like a group of people with dirty shoes had left tracks all over the snow. But in reality, they are sediments, and even small pebbles and bivalves, which the on-going melting process has brought to light on the surface of the MOSAiC floe. When the sea ice formed, they were frozen inside; accordingly, they hail from the nursery of sea ice along the Siberian Shelf, which the experts have now used a combination of model simulations and satellite data to describe in detail.

The MOSAiC floe had already drifted over 1200 nautical miles in a meandering course when the research icebreaker Polarstern moored to it on 4 October 2019, at the coordinates 85° North and 137° East, and began to drift with it through the Arctic Ocean. While the current expedition team is busy taking readings in the Arctic, their colleagues back at home are analysing the data gathered.

The precise analysis confirms the first impressions from the beginning of the expedition: “Our assessment shows that the entire region in which the two ships looked for suitable floes was characterised by unusually thin ice,” reports Dr Thomas Krumpen, a sea-ice physicist at the Alfred Wegener Institute, Helmholtz Centre for Polar and Marine Research (AWI). Last autumn, the first author of The Cryosphere study coordinated research activities on the Russian icebreaker Akademik Fedorov, which accompanied the flagship of the MOSAiC expedition, the Polarstern, for the first few weeks. The Akademik Fedorov was also instrumental in deploying monitoring stations at various locations across the MOSAiC floe – collectively referred to as the ‘Distributed Network’.

“Our study shows that the floe we ultimately chose was formed in the shallow waters of the Russian shelf seas in December 2018,” Krumpen explains. Off the coast of Siberia, strong offshore winds drive the young ice out to sea after it forms. In the shallow water, sediments are churned up from the seafloor and become trapped in the ice. Ice formation can also produce pressure ridges, the undersides of which sometimes scrape along the seafloor. As a result, stones can also become embedded in the sea ice. Now that the summertime melting has begun, all of this material is being revealed at the ice’s surface: “At several points we’ve found entire mounds of pebbles measuring several centimetres in diameter, plus a number of bivalves,” reports MOSAiC expedition leader Prof Markus Rex directly from the Arctic.

Meanwhile, back home in Bremerhaven, Germany, Thomas Krumpen is thrilled to see that the now emerging ‘bivalve ice with pebbles’, as he has affectionately dubbed it, so clearly confirms the study’s findings. The team of authors led by the AWI expert used a combination of satellite imagery, reanalysis data and a newly developed coupled thermodynamics backtracking model to reconstruct the floe’s origins. Now Krumpen and his colleagues are devising a strategy for gathering samples of the sediments. The extent to which these ‘dirty’ and therefore darker patches accelerate melting on the floe is an important question, and answering it could enhance our understanding of the interactions between the ocean, ice and atmosphere, of biogeochemical cycles, and of life in the Arctic in general.

In addition to mineral components, the sea ice also transports a range of other biogeochemical substances and gases from the coast to the central Arctic Ocean. They are an important aspect of MOSAiC research on biogeochemical cycles, i.e., on the formation or release of methane and other climate-relevant trace gases throughout the year. However, as a result of the substantial loss of sea ice observed in the Arctic over the past several years, precisely this ice, which comes from the shallow shelves and contains sediments and gases, is now melting more intensively in the summer, causing this material transport flow to break down. In the 1990s, the Polarstern was often in the same waters where the MOSAiC expedition began its drift. Back then the ice was still ca. 1.6 metres thick at the beginning of winter, whereas it had shrunk to ca. 50 centimetres last year – which made the search for a sufficiently thick floe in the autumn of 2019 all the more difficult.

“We were fortunate enough to find a floe that had survived the summer and formed in the Russian shelf seas. This allows us to investigate transport processes from the ‘old Arctic’, which now only partly function, if at all,” says Krumpen. Particularly in the higher latitudes, global warming is causing temperatures to climb rapidly: in the summer of 2019, the last summer before the expedition, Russian meteorological stations reported record temperatures. These high temperatures sparked rapid melting and significantly warmed Russia’s marginal seas. As a result, many parts of the Northeast Passage were ice-free for a 93-day period (the longest duration since the beginning of satellite observation). The experts predict that if CO2 emissions remain unchecked – as they have in the past several years -the Central Arctic could be ice-free in summer by 2030.

Home » The Latest Findings On The MOSAiC Floe