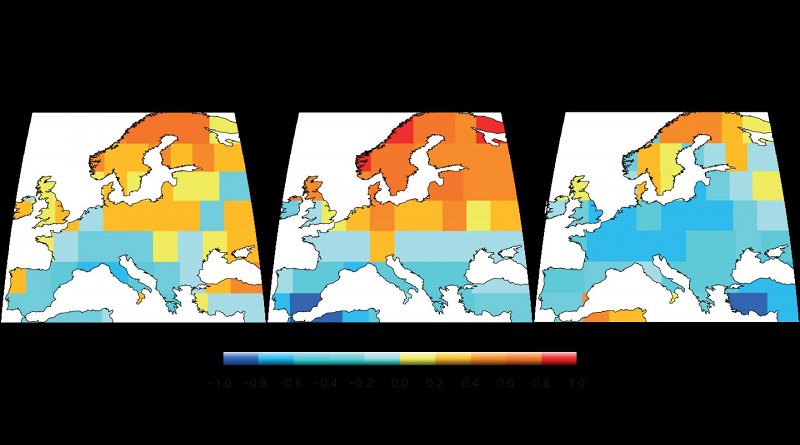 An international team of researchers have published a study exploring the association between summer temperature and drought across Europe placing recent drought in the context of the past 12 centuries.

The study reveals that, throughout history, northern Europe has tended to get wetter and southern Europe to get drier during warmer periods. They also observe that recent changes in drought patterns are not unprecedented as yet and emphasising that continuing to improve understanding of the relationship between summer heat and drought is critical to projecting flood and drought risks.

This comparison revealed that the climate model simulations show a too strong relationship between warm and dry summers, and do not capture that a large part of Europe has received more precipitation, not less, when it has been warm in the past 12 centuries.

Project leader Dr. Fredrik Charpentier Ljungqvist, Associate Professor at Stockholm University, said these new findings are important as we are able to see for the first time that the relationship between summer temperature and drought in modern weather measurements has persisted for at least 12 centuries. “We can also see that wetting trend in northern Europe, and drying trend in southern Europe, during the 20th century is not unprecedented over this time perspective,” he said.

Going on to discuss the climate model results, Dr. Ljungqvist said: “Crucially, our study shows that the very strong link between warm and dry periods being simulated in the climate models could be too simple. It’s not a picture backed up by the weather records and tree-ring data. The climate model simulations seem to underestimate how large part of Europe actually experiences wetter summers when the climate is warmer.”

“Our study implies a possible exaggeration in the climate models of temperature-driven drought risk in parts of northern Europe under global warming. But this also means that the models may well underestimate future excessive precipitation, with associated flood risks, in northern Europe,” continues Dr. Ljungqvist.