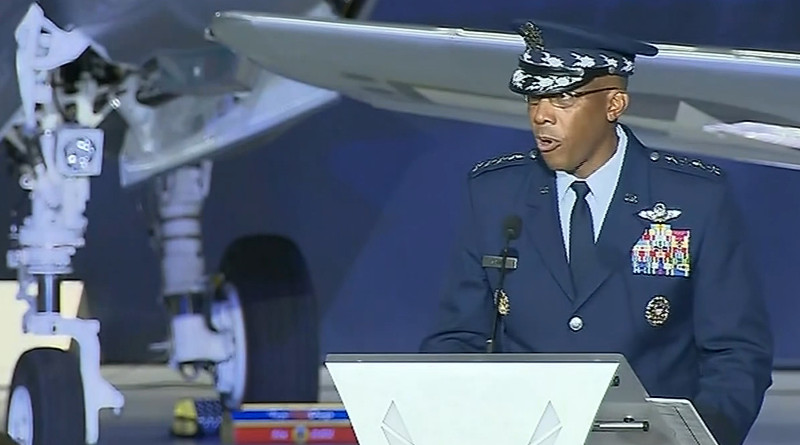 The Air Force’s military leadership changed hands during a ceremony Thursday at Joint Base Andrews, Maryland.

Goldfein provided steady leadership over the last four years, Esper said. He tackled the monumental task of organizing, training and equipping the most advanced, the most capable and the most lethal air force in the world and in history.

The general led nearly 700,000 active, Guard and Reserve airmen in global missions, the secretary said, adding that he invested in those people, whom he called “the Air Force’s greatest resource.”

Goldfein’s leadership was crucial in laying the foundation for the creation of the Space Force, the department’s newest service, Esper continued. In everything he did, “General Goldfein was in the right place at a very important time,” the defense secretary said.

He noted that Goldfein also was at the forefront in modernizing the department’s nuclear capability with the B-21 Raider and advancing game-changing technologies such as hypersonics, and that the general led the advance of joint all-domain command and control.

Throughout the COVID-19 pandemic, Goldfein was able to carry out the mission without missing a beat, he added, and he demonstrated every day the services core values of integrity, service above self, and excellence.

Esper said Brown brings with him 35 years of service distinguished by a depth of expertise and experience that makes him exceptionally qualified to be the next chief of staff.

Brown is humble, approachable and credible, principles that have guided him throughout his service, Esper said.

Barrett praised Goldfein’s service, citing instances of his battlefield valor in Iraq and Serbia. She said Goldfein is a team player whose motto is “What’s best for the joint force is best for the Air Force.”

Barrett said Brown will have an outsized impact on accelerating modernization for the years ahead, and collaborating with the Space Force. “There’s no better officer to take the stick,” the Air Force secretary said.

Milley said Goldfein has demonstrated exceptional competence in his roles of increasing readiness and modernization, advancing talent management, working with allies and partners, integrating the Air Force as a key component of the joint force and executing the National Defense Strategy.

In addition, Milley said, Goldfein’s character has been impeccable, noting that a person’s character really shows when the chips are down, not just in good times. “That’s when you find out who people are made of,” the Joint Chiefs chairman said. “He never failed the test.”

Milley said that Brown, too, has forged unbreakable links with allies and partners globally over his 35-year career. He also has a strategic intellect and impeccable character, the chairman added.

Milley praised the spouses and families of both Air Force generals for supporting them and advocating for the Air Force and its people.

Goldfein said it was his sacred duty to care for America’s men and women entrusted to him. It was also an awesome responsibility providing thoughtful advice to the chairmen of the Joint Chiefs, the defense secretary, the National Security Council and the president during his time as chief of staff, as well as supporting the Constitution, he said.

Brown said he was inspired by those before him, including his African American role models. He said he’s committed to addressing today’s challenges while preparing for the future to better compete, deter and win.