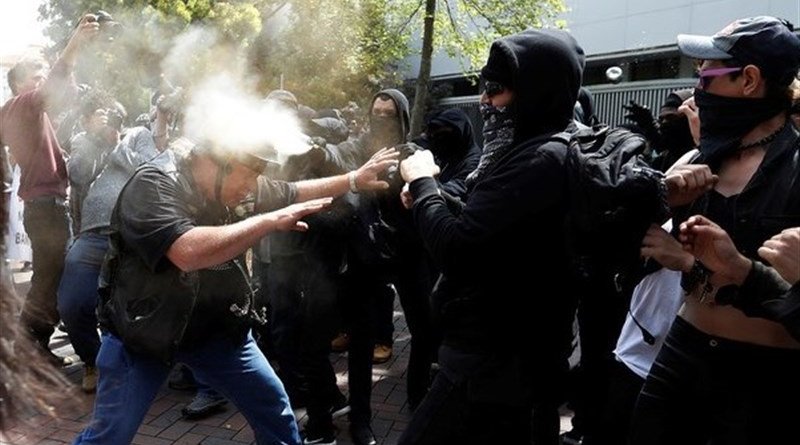 A Proud Boys member was struck and seriously injured by a pickup truck, allegedly driven by an Antifa activist who had targeted him, after attending a memorial for the pro-Trump demonstrator who was killed last week in Portland.

Shane Moon was reportedly hit by the truck Saturday in a parking lot in Vancouver, Washington, where members of the Proud Boys and Patriot Prayer conservative activist groups held an event to honor Aaron “Jay” Danielson, who was shot and killed by an Antifa supporter on Aug. 29 in Portland.

The driver of the truck allegedly tried to provoke a fight with Proud Boys members in a Vancouver bar just before accosting Moon and others in a nearby parking lot, the Gateway Pundit reported. Members of the group who spoke to the outlet described the man as an “Antifa” activist.

“Once the guy started his vehicle up and started to drive off, he hit Shane,” the Pundit quoted Proud Boys member Rex Fergus as saying. “Shane tried to get out of the way, and the guy ran him over.”

Moon reportedly was knocked upward and onto the roof of the truck. He hit his head on the concrete as he fell and was bleeding from the ears and nose. The driver fled the scene and was later arrested, but Vancouver Police haven’t yet identified him.

A fundraiser was set up for Moon on GoFundMe and had brought in more than half of its $10,000 goal as of Sunday afternoon. He’s suffering from bleeding on his brain and from his left temporal lobe and is expected to miss work during his recovery.

Supporters reacted angrily to the incident on Twitter, calling it “sickening” and “disgusting.” One commenter said, “Either government removes the shackles on police and fix it or there will be some very angry patriots holding several groups accountable.” Another questioned why Antifa hasn’t been declared a domestic terror organization, while one said, “Antifa is a disease.”

Earlier Saturday, Patriot Prayer leader Joey Gibson called for peace when he spoke at the Danielson memorial in Vancouver’s Esther Short Park. “I don’t want to see one person go into Portland and commit acts of violence in the name of Jay,” Gibson said. “Not one.”

Gibson’s speech came one day after Facebook removed his profile page and that of Patriot Prayer as part of an effort to block “violent social militias” from its platform. Gibson complained that the social media giant banned Patriot Prayer pages and left Portland Antifa pages unscathed a week after “Antifa groups murdered my friend.”