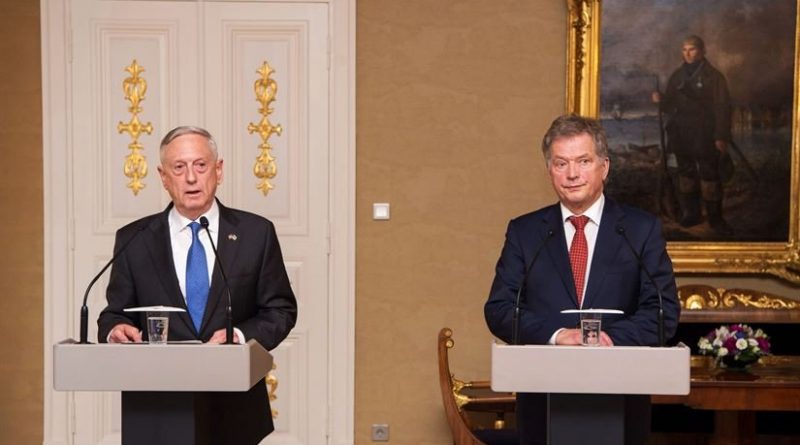 As part of his five-day trip to Europe, Mattis spoke Monday in Helsinki, after meeting with Finnish President Sauli Niinistö.

“My country highly values Finland’s contribution to the global coalition to defeat [the Islamic State of Iraq and Syria],” Mattis said in a press appearance with Niinistö.

“I think that your tactically skillful and ethically sound troops have brought courage and competence to the battlefields against terrorism in the same manner in which your country has brought compassion to the humanitarian fields on so many occasions,” the secretary said.

Mattis added, “The lessons of our success in reducing the terrorist threat is a reminder that we are strongest when we democracies stand together, united in the face of barbarism, united in the interest of peace.”

Mattis welcomed the “deepening bilateral and NATO defense partnership with Finland” and applauded the Nordic nation’s initiative to establish the European Center of Excellence for Countering Hybrid Threats.

“With this center, Finland has created an institution fit for our time, and I thank you, Mr. President, for your foresight,” Mattis commented.

The secretary complimented Finland’s commitment to Nordic defense cooperation, to include assuming the chair for the Arctic Council.

“By tightening such cooperation here in the north, we see the deterrent capability of democracies strengthened,” he said. “In today’s conversations, we reaffirm that relations between Finland and the United States have never been stronger.”

While in Finland today and tomorrow, Mattis is meeting with the Northern Group, a multilateral forum of 12 countries, including the five Nordic countries — Denmark, Finland, Iceland, Norway and Sweden; the three Baltic countries — Estonia, Latvia and Lithuania; Germany; the Netherlands; Poland and the United Kingdom.

Mattis is on a multination European trip to reaffirm key partnerships and alliances in Europe, according to a Defense Department press operations statement.

En route to Finland, he told reporters the trip is an “opportunity to reiterate: We stand by our friends, democracies, NATO and otherwise in Europe, if any nation, including Russia, seeks to undermine the rules-based international order.”

Mattis travels on to Belgium for a NATO defense ministerial meeting. He separately hosts a meeting of ministers from the defeat-ISIS coalition.

He concludes the trip Nov. 10 in London where he will meet with Gavin Williamson, Britain’s new defense secretary.