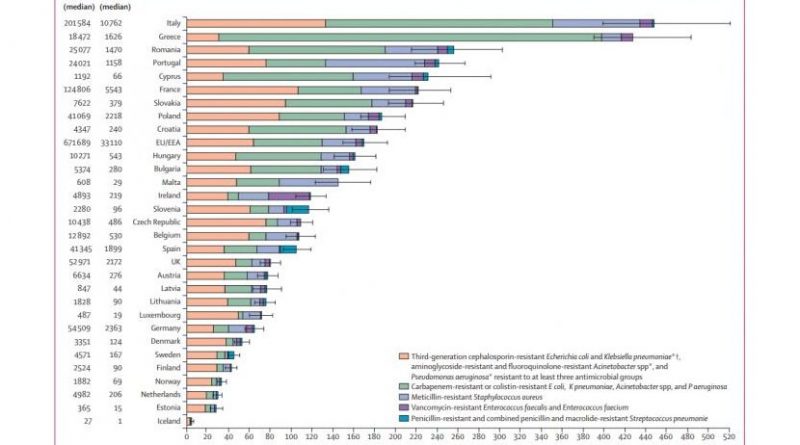 Error bars are 95% uncertainty intervals. Greece did not report data on S pneumoniae isolates to the European Antimicrobial Resistance Surveillance Network in 2015. DALY rates are age-standardised to limit the effect of demographic differences across countries; numbers of cases and deaths are not age-standardised. DALYs=disability-adjusted life-years. *Excludes those resistant to carbapenem or colistin. †In 2015, most of the third-generation cephalosporin-resistant E coli (88·6%) and K pneumoniae (85·3%) isolates reported to the European Antimicrobial Resistance Surveillance Network produced an extended-spectrum β-lactamase. Credit: ECDC/TLID

An ECDC study estimates the burden of five types of infections caused by antibiotic-resistant bacteria of public health concern in the European Union and in the European Economic Area (EU/EEA).

The study estimates that about 33000 people die each year as a direct consequence of an infection due to bacteria resistant to antibiotics and that the burden of these infections is comparable to that of influenza, tuberculosis and HIV/AIDS combined. It also explains that 75% of the burden of disease is due to healthcare-associated infections (HAIs) and that reducing this through adequate infection prevention and control measures, as well as antibiotic stewardship, could be an achievable goal in healthcare settings.

Finally, the study shows that 39% of the burden is caused by infections with bacteria resistant to last-line antibiotics such as carbapenems and colistin. This is an increase from 2007 and is worrying because these antibiotics are the last treatment options available. When these are no longer effective, it is extremely difficult or, in many cases, impossible to treat infections.

Home » 33,000 People Die Every Year Due To Infections With Antibiotic-Resistant Bacteria