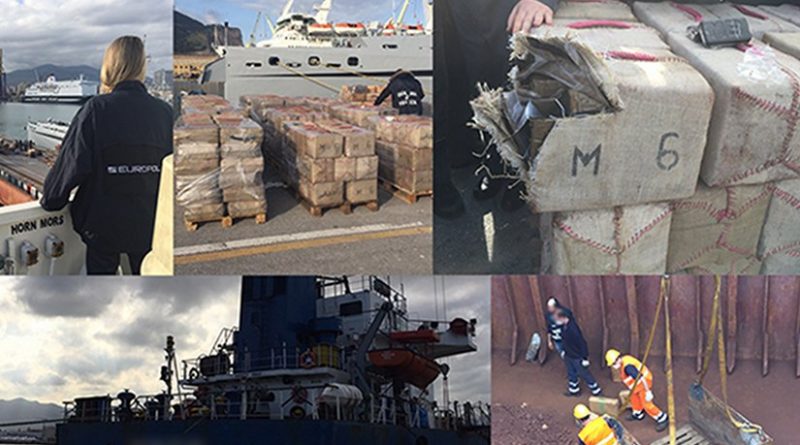 Europol supports Italian Guardia di Finanza and D.C.S.A. in an operation resulting in the seizure of over 13.5 tons of cannabis resin from a Panama-registered merchant vessel. Photo Source: Europol.

Europol said it supported the Italian Guardia di Finanza and D.C.S.A. in an operation resulting in the seizure of over 13.5 tons of cannabis resin from a Panama-registered merchant vessel, and the arrest of 11 Ukrainian and Georgian crew members.

The operation was closely supported by the Spanish National Police and Vigilancia Aduanera (D.A.V.A.), M.A.O.C.-N , and the Hellenic Coast Guard.

Tactical teams from Guardia di Finanza intercepted and boarded the vessel ‘Munzur’ approximately 10 miles off the north-eastern shores of the island of Pantelleria on December 2, and escorted it to the Italian Port of Palermo. From there, the Nucleo di Polizia Tributaria – G.I.C.O. – G.O.A. began the investigation into the origin of the drugs and the criminal enterprise involved.

According to Europol, this operation builds on four successful actions against transnational drug trafficking in the Mediterranean Sea since June this year; these have led to a total seizure of nearly 60 tons of cannabis resin and the arrest of 46 individuals.

The actions fall under the complex international police operation Libeccio International. This involves various EU law enforcement agencies from EU Member States working together as a joint operational team (JOT) to tackle large-scale drug trafficking in the Mediterranean Sea. On this occasion, in Palermo the JOT brought together officials from Greece, Spain, and Europol, to ensure immediate follow-up of international investigative leads.