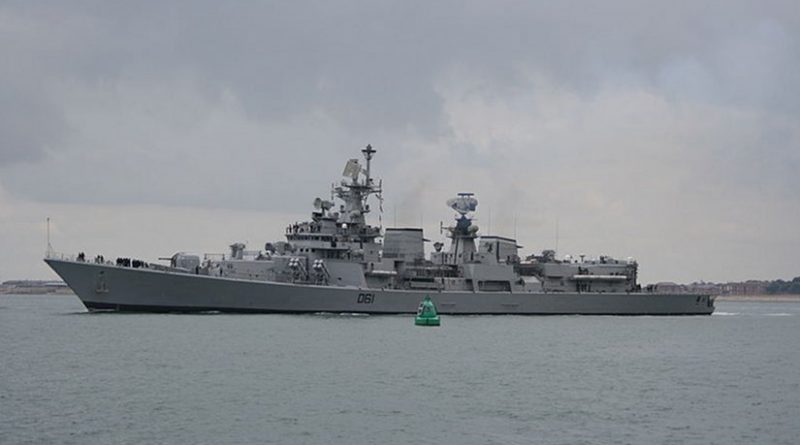 On October 26, 2015, the Indian Navy released its latest maritime strategy, titled “Ensuring Secure Seas: Indian Maritime Security Strategy.” This edition is a revised and updated version of the previous outlined strategy “Freedom to Use the Seas: India’s Maritime Military Strategy,” published in 2007. The title itself is indicative of the changing tone of the Indian navy’s interests and intentions from the 2007 strategy. The previous strategy did not take into consideration the changing geopolitical environment and its strategic implications on India’s maritime interests. The 2015 maritime security strategy addresses this gap by complementing the evolving security dynamics in the Indian Ocean region and reflecting a bold Indian navy with a renewed outlook on India’s maritime security needs.

The security architecture in maritime Asia along with the rise of China is compelling India to define its strategic interests and review its maritime policy. The maritime security strategy precisely does the same. It carries a larger strategic angle than its predecessors and attempts to embody an Indian naval vision for the region.

There are three key points that underpin the shift in India’s naval strategy as per this document.

One, this is the first time that an Indian government document is formally acknowledging the implications of the evolving and increasingly accepted concept of the “Indo-Pacific” on India’s maritime security. The geographic extent of this concept has multiple variations but in the contemporary world, the notion essentially brings the Indian Ocean and the Western Pacific — theaters of geo-political competition — into one strategic arc. The concept has been formally endorsed by Australia, and Canberra outlines the strategic implications of this region in its 2013 Defense White paper. Regional countries such as the United States, Japan, India, and Indonesia prefer to use the term Asia-Pacific in their official documents but different sections of the leadership from these countries have used the term Indo-Pacific in their speeches and remarks.

Indian Chief of Naval Staff RK Dhowan, underpinning the need to revise the 2007 maritime strategy, writes, “The shift in worldview from a Euro-Atlantic to an Indo-Pacific focus and the repositioning of global economic and military power towards Asia has resulted in significant political, economic and social changes in the Indian Ocean Region and impacted India’s maritime environment in tangible ways.”

India has been adamantly focused on the Indian Ocean and the security changes along its maritime boundaries. As developments beyond this region began to shape the maritime security framework in the Indian Ocean Region, there was a sense of uncertainty among regional navies as to whether India is taking note of these changes and, more importantly, if New Delhi will re-align its policies based on these developments. Nations such as the United States, Japan, and Australia had realized the role India could play in the evolving security architecture, but there was no clarity on New Delhi’s intentions. This edition of the Maritime Security Strategy is putting those concerns to rest, to a certain extent.

Two, the navy’s areas of interest (both primary and secondary) are expanding, reflecting New Delhi’s willingness to play a larger role in the region. The Red Sea, previously a secondary area of interest (as per the revised Maritime Doctrine of 2009), is now an area of primary interest for the Indian navy. Additionally, “the Gulf of Oman, the Gulf of Aden and their littoral regions, the Southwest Indian Ocean, including IOR island nations therein and East Coast of Africa littoral regions” now all are of primary interest to India’s maritime security. While Africa and its littoral regions previously were only of secondary importance, the Gulf of Oman, Aden and the South-West Indian Ocean did not feature specifically in either of the areas of interest in the Maritime Doctrine.

In defining the areas of interest, the navy’s intention is to outline the geographic extension of its strategic influence and give an indication of its involvement in those areas. Over the years, India’s ASEAN friends have voiced their disappointment in New Delhi’s lack of naval and political presence in the South China Sea, against the backdrop of a rising China. This Maritime Strategy re-affirms India’s resolve to not get directly engaged in the affairs of the Western Pacific and get caught in the U.S.-China power politics dynamic. While ASEAN nations have shown a preference for a larger Indian presence in the Western Pacific, regional navies such as Australia and the United States have encouraged India to play a larger security role and be a “net security provider” in the region.

This links us back to the first point, which is India’s move to acknowledge the changes happening around India’s area of maritime interest — regardless of whether the navy ascribes to them or not — and renew its own strategy keeping in line with India’s strategic interests.

The fact that there has been a shift in India’s maritime strategy and policies was made clear through the navy’s engagement under the Modi government. There was, however, no document per se spelling out this shift. The 2015 maritime strategy not only formalizes the intent of the Indian navy, it also takes a bold tone in narrating the same. Given the emphasis on collaborating with other navies, it is clear that part of the narrative is to build a network of regional cooperation to ensure peace and stability in India’s areas of interest. The document also recognizes the increasing importance of HADR operations for the Indian navy, given the expansion of India’s maritime outlook as well as capabilities.

Be it through the Joint Strategic Vision with the United States, Japan’s inclusion into the MALABAR exercises, new bilateral exercises with Japan, Indonesia, and Australia, or re-engaging with the island nations of the IOR and South Pacific, there is a clear message that India is willing to play a larger role in the unfolding security architecture in the region.

It was only a matter of time before New Delhi acknowledged the changing dynamics within its area of maritime interests. The initiatives taken under the Modi government to re-engage with the navies of the region are much appreciated and this document is a step forward in voicing India’s intentions and concerns regarding maritime security. If New Delhi can sustain the momentum that it has created in the Asian maritime domain, India will emerge as a credible leader and critical player in the evolving security architecture of the Indo-Pacific

*The writer is a Junior Fellow at Observer Research Foundation, Delhi