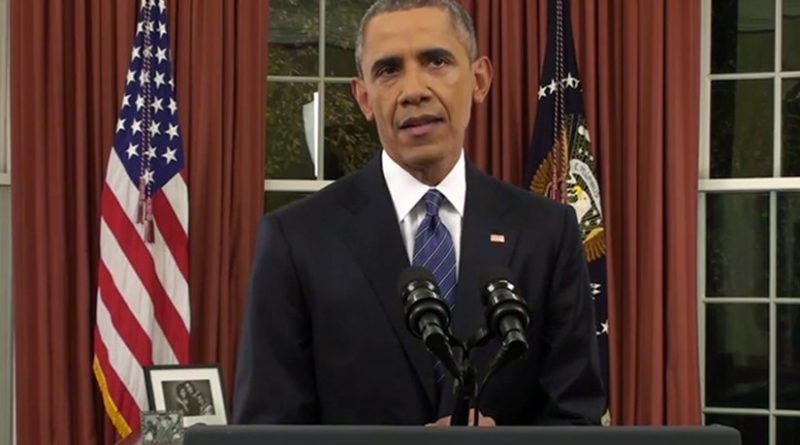 The terrorist threat has evolved into a phase that includes mass shootings, but the nation and its international partners will prevail, President Barack Obama said in a live address last night from the Oval Office.

The United States has become better at preventing complex, multifaceted attacks like those that took place on 9/11, the president said, but terrorists have turned to less complicated acts of violence like the mass shootings at Fort Hood, Texas, in 2009; in Chattanooga, Tennessee, in July; and in San Bernardino, California, last week.

“The threat from terrorism is real, but we will overcome it,” Obama said.

“We will destroy [the Islamic State in Iraq and the Levant] and any other organization that tries to harm us,” he said. “We will prevail by being strong and smart, resilient and relentless, and by drawing upon every aspect of American power.”

Laying out his strategy for destroying ISIL, Obama said the U.S. military and partners will continue to hunt down terrorist plotters in any country where it is needed.

In Iraq and Syria, airstrikes are taking out ISIL leaders, heavy weapons, oil tankers and infrastructure, the president said, and since the Nov. 13 Paris attacks, France, Germany and the United Kingdom have ramped up their contributions to the coalition military campaign.

Second, he said, the coalition will continue to train and equip tens of thousands of Iraqi and Syrian forces fighting ISIL on the ground to eliminate its safe havens.

“In both countries we’re deploying special operations forces who can accelerate that offensive. We’ve stepped up this effort since the attacks in Paris, and we’ll continue to invest more in approaches that are working on the ground,” Obama said.

Third, he said, the United States is working with friends and allies to stop ISIL operations — disrupting plots, cutting off financing and preventing recruiting efforts.

Since Nov. 13, Obama said, the nation has surged intelligence-sharing with European allies, is working with Turkey to seal its border with Syria, and is cooperating with Muslim-majority countries and with Muslim communities at home to counter the ideology ISIL promotes online.

Fourth, with American leadership the international community has begun to establish a process and a timeline to pursue ceasefires and a political resolution to the Syrian war, he added.

“Doing so will allow the Syrian people and every country — including our allies, but also countries like Russia — to focus on the common goal of destroying ISIL, a group that threatens us all,” Obama said.

Getting the Job Done

The strategy, designed and supported by military commanders and counterterrorism experts, together with 65 countries that have joined a U.S.-led coalition, is constantly examined to determine when more steps are needed to get the job done, he said.

The president also laid out steps that Congress should take right away. These included voting to authorize the continued use of military force against ISIL’s terrorist army.

“For over a year, I have ordered our military to take thousands of air strikes against ISIL targets. I think it’s time for Congress to vote to demonstrate that the American people are united and committed to this fight,” Obama said.

The president said the nation should not be drawn into a long and costly ground war in Iraq or Syria as part of the fight against ISIL.

Obama said the current strategy, which includes air strikes, special operations forces and partnerships with local forces that are fighting to regain control of their own countries, will allow the coalition to achieve a more sustainable victory.

Another thing the United States should not do in the ISIL fight is to let the fight be defined as a war between America and Islam, he added.

“ISIL does not speak for Islam,” Obama said. “They are thugs and killers, part of a cult of death, and they account for a tiny fraction of more than a billion Muslims around the world.” He also said Muslim communities must be enlisted as some of the strongest allies in the ISIL fight and not pushed away with suspicion and hate.

“That does not mean denying the fact that an extremist ideology has spread within some Muslim communities. This is a real problem that Muslims must confront, without excuse,” Obama said.

Muslim leaders everywhere must continue working with the United States and other nations to reject the ideology that groups like ISIL and al-Qaida promote, the president said, and speak out against acts of violence and interpretations of Islam that violate the values of religious tolerance, mutual respect and human dignity.

For Americans, he said, it is the nation’s responsibility to reject proposals that Muslim Americans should somehow be treated differently.
“Muslim Americans are our friends and our neighbors, our co-workers, our sports heroes, and, yes, they are our men and women in uniform who are willing to die in defense of our country,” Obama said. “We have to remember that.”