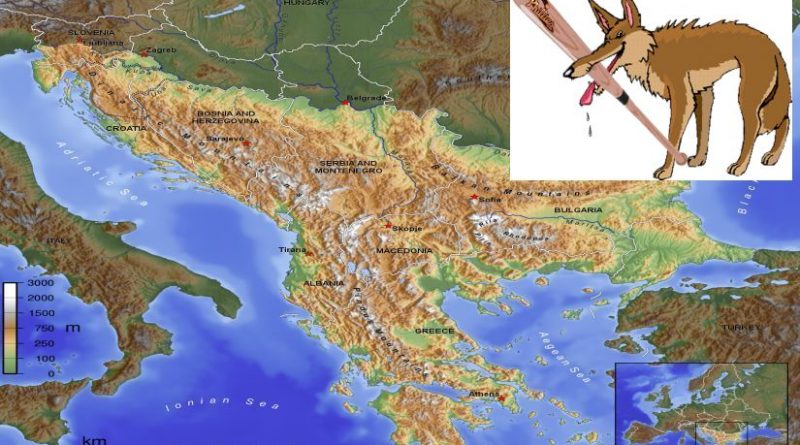 Everybody within the area of South-East Europe older than 35 years know the famous song from Tito’s time: “From river Vardar up to mountain Triglav“1, which today has become just folklorist nostalgia without any political articulation, but at the same time the title of the song has been implemented directly and severely…within the area of criminal and nationalism (read: chauvinism) activity.

Once upon a time a former2 friend of mine told me a story: In ancient Bosnian villages there existed a custom of so-called Dancing with Wolves3, when a group of people gathered and among them there was also somebody who had the task of preparing a good lath, even a bat, which had, in its ending (upper one, titled Melee) a special twisted part that was extremely painful for the one who was beaten. Nevertheless, that group would find a victim who would be beaten the same night — after which the person would become a third category cripple. He or She could not recover from that beating for the rest of their life. Additionally, the victim had to observe silence about the beating. Because, whoever did the Dance with Wolves, meant that they did not have anything to do with Society and or the  State, but with, it is so obviously, instead a People’s court. In a nutshell, this showed that Society and/or the State could not solve the problem of the mentioned person.

What is the reason for this story to be written? Simple as it is – that in today’s current environment it would be more than welcomed a Dance of the above mentioned kind. Today there are so many sinful persons within the area of the former Yugoslavia4 that indeed there could be organized Festival of Dancing with Wolves, and even nowadays it could be an international one.

Talking about sin should be contradictio in adiecto because, when comparing with the Socialist period of time, out of 2.5 million people – members of Communist Party of Yugoslavia, just roughly 250,000 of them continue to support Social–Democrats (amazing how they define Social Democracy here – it is more neo-liberal organized anarchy) and the rest of them have become national party supporters.

When I write “national” I surely mean: nationalistic, chauvinistic and exclusive parties that are living within a cocoon of nonsense saying that their truth is the only one.

Also, if they (2,250,000 former members of Communist party of Yugoslavia plus at least another 1,000,000 “new born” members of above mentioned national parties out of a population of 23 million in the area) really follow up the words from the Book (Bible and or Holy Koran) they would love their neighbor, say the truth all the time and live honest and dissent lifes.

Unfortunately, the real truth is exactly the opposite, just as reflected within the question that I have asked, at the end of a one hour interview conducted by a female journalist for the local Cable TV Hema in Sarajevo, back in 2012: If religion means honesty, love and decent living, why then we nowadays don’t we have more believers and fewer sinners and thieves?

She did not answer me.

Maybe, the answer is within…Dancing with Wolves.

Notes:
1. River Vardar is in Macedonia and Mountain Triglav is in Slovenia
2. His name is Edhem, eloquent economist from small town of Turbe nearby city of Travnik in Central Bosnia and Herzegovina. Political reasons has stopped our friendship – that is the answer – simple as it is.
3. Kevin Costner does not have anything to do, God forbid, with mentioned.
4. Slovenia, Croatia, Bosnia and Herzegovina, Montenegro, Serbia, Kosovo*, Macedonia