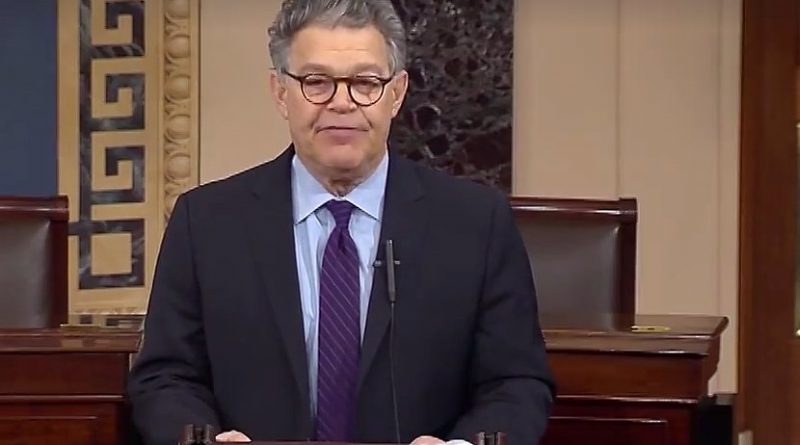 U.S. Senator Al Franken announced he will resign amid a growing firestorm stemming from sexual misconduct allegationsthe second Democratic lawmaker to announce a departure this week under a cloud of moral impropriety.

“Today I am announcing that in the coming weeks I will be resigning as a member of the United States Senate,” said Franken, who has represented Minnesota since 2009, speaking Thursday on the Senate floor.

More than two-dozen fellow Democratic senators had called on Franken to resign after a news media report quoted a former congressional aide as saying Franken forcibly tried to kiss her in 2006.

In recent weeks, several other women accused Franken of groping them, including a Los Angeles radio host who posted a picture of a smiling Franken posing with his hands over her breasts while she slept on a flight during a 2006 tour to entertain U.S. troops in the Middle East.

“Some of the allegations against me are simply not true. Others I remember very differently. I have used my power to be a champion of women,” Franken said, adding, “I may be resigning my seat, but I am not giving up my voice. I will continue to stand up for the things I believe in as a citizen and as an activist.”

“I of all people am aware that there is some irony in the fact that I am leaving, while a man who has bragged on tape about his history of sexual assault sits in the Oval Office, and a man who has repeatedly preyed on young girls campaigns for the Senate with the full support of his party,” Franken said.

The senator’s colleagues praised his decision to resign.

“This is the right decision,” Senator Amy Klobuchar, a fellow Minnesota Democrat, said in a statement. “Nothing is easy or pleasant about this, but we all must recognize that our workplace cultures — and the way we treat each other as human beings — must change.”

“Senator Franken made the right decision today, but the Senate has so much more work to do … to foster safe work environments and ensure harassers are held accountable,” Democrat Tim Kaine of Virginia wrote on Twitter. “Let’s get to work.”

On Tuesday, the longest-serving member of the House of Representatives, Michigan Democrat John Conyers, quit in the face of sexual misconduct allegations against him. House leaders of both parties had called for his resignation after several women who worked for Conyers accused him of unwanted sexual advances spanning several years.

Allegations of sexual misconduct have roiled the United States for weeks, with dozens of powerful men in the world of politics, business, entertainment and the media losing their jobs after women came forward with graphic allegations of abuse.