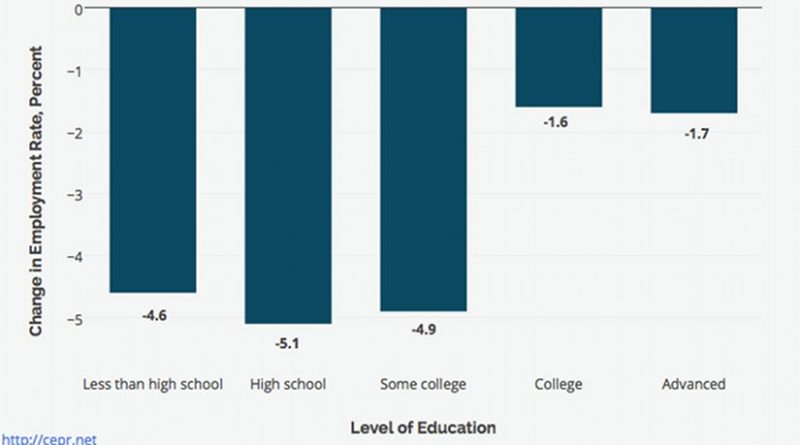 The Labor Department reported that the economy added 292,000 jobs in December. There were also upward revisions to job growth for the prior two months, bringing the three month average to 284,000. The household survey showed the unemployment rate remained at 5.0 percent, but the employment rate rose to 59.5 percent, the highest rate of the recovery. Over the last two months, employment reportedly grew by 732,000.

While the monthly employment numbers are erratic, this could be evidence that people are finally re-entering the labor force as the labor market strengthens. The biggest rises in employment over the last two months have been among African Americans and especially African American teens. The EPOP for African Americans rose by 0.5 percentage points in December as the unemployment rate fell from 9.4 to 8.3 percent. The EPOP for black teens rose by 1.4 percentage points in December and is now 3.6 percentage points above its year-ago level. The unemployment rate for black teens was reported at 23.7 percent, almost the same as the November level. This compares to an employment rate of 33.5 percent last December. While these data indicate a substantial improvement in the labor market situation facing African Americans, they should be viewed with caution. These numbers are highly erratic and it is possible that these gains are simply the result of measurement error. However, they are encouraging for now.

The December rise in employment is especially important since one of the striking features of this recovery has been the large number of people who have dropped out of the labor force. The employment-to-population ratio is still more than 3 percentage points below its pre-recession level. This story is little changed even if we focus on prime-age workers, removing the impact of retiring baby boomers.

The decline shows up at all levels of education. While it is sharpest among less educated workers, there was a drop in employment rates of 1.6 percent among prime-age workers with college degrees and 1.7 percentage points among prime-age workers with advanced degrees. It is implausible that large numbers of highly educated workers simply decided that they no longer feel like working. The more plausible explanation is that the weak labor market has caused them to give up looking for jobs. The recent data indicate that these workers may finally be re-entering the labor force.

The growth in employment was widely spread across industries, with construction adding 45,000 jobs, employment services adding 42,300, and health care 39,400. The restaurant sector had another strong month, adding 36,900 jobs. It is likely that some of these gains are attributable to unusually warm weather in large parts of the country. If that is the case, then the winter months will show a substantial slowing of growth.

There is still little evidence that the tighter labor market is translating into stronger wage growth. The average hourly wage rose at a 2.5 percent annual rate in the last three months compared with the prior three months. This is consistent with the 2.5 percent increase over the last year.

The trend in hours is also not consistent with a strong labor market, as the length of the average workweek remained at its November level of 34.5 hours. That is down from 34.6 hours over most of the prior year. While the downward drift may just be measurement error, average hours clearly are not rising.

In sum, this is clearly a very positive report, but there are still important grounds for concern. With the EPOP still well below pre-recession levels, we may still have a long way to go before the labor market is strong enough to support wage growth.