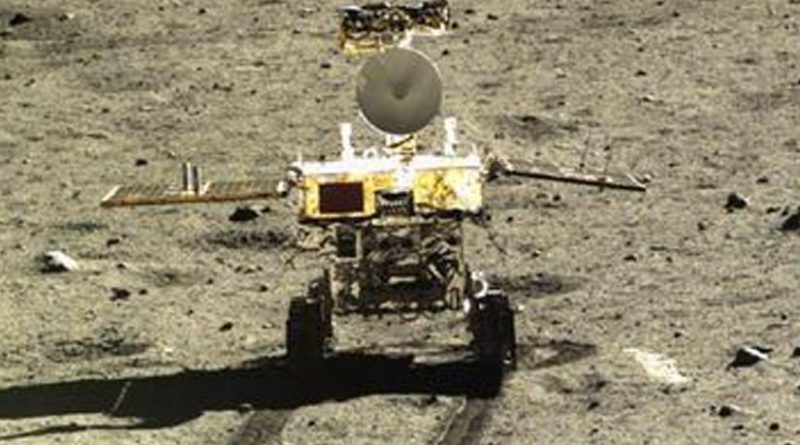 As 2016 drew to a close, China published its third space white paper, sustaining the pattern of publishing one every five years.[1] This is consistent with the cycle of Five Year Plans that are central to Chinese economic and social planning efforts. China’s Space Activities in 2016 provides both an overview of China’s space achievements over the past five years and an outline of key projects and milestones for the next five years.

Much has been made of the white paper’s discussion of Chinese lunar, deep space, and manned space efforts. According to the white paper, a major focus during the next five years will be conducting several landings on the Moon. These missions, parts of the China Lunar Exploration Program (CLEP), build on the experience of deploying lunar orbiters and a rover, Yutu (“Jade Rabbit”), over the past several years. The immediate goal is to obtain and retrieve lunar soil samples (Chang’e-5) and to land a probe on the far side of the Moon (Chang’e-4). Chang’e-4 would make China the first nation to land an object on that side of the Moon.

In addition, Chinese space authorities expect to begin exploring the larger solar system. Thus far, China has not ventured beyond the Earth–Moon system. Its one attempt to do so (as a part of the Russian Phobos-GRUNT mission) was when the Russian mission failed during launch. The white paper states that China intends to launch a probe to Mars by 2020 and is also interested in dispatching probes to Jupiter and the asteroid belt.

The white paper also indicates that the Chinese will be launching resupply vehicles (Tianzhou) to the Tiangong-2 space lab so that they can conduct prolonged missions. This will help to support the broader goal of getting a larger, more advanced Chinese space station operational within the next five years. No indication is given, however, of any plans to land a Chinese astronaut on the Moon. Given the methodical approach China has taken thus far toward space, it is likely that they are currently studying the problem but will not incorporate manned spaceflights formally into space plans until they have successfully landed and returned robotic surveyors and samples.

In addition to such high-profile efforts, the white paper makes clear that PRC decision-makers will not be neglecting fundamental space support capabilities. The next five years will see the Chinese producing additional models of rockets, expanding the current range of Long March launch vehicles. They will also improve their Beidou indigenous satellite navigation system and field a variety of remote sensing systems (reconnaissance and surveillance satellites), including both electro-optical and synthetic aperture radar systems. The Chinese also expect the new Wenchang launch facility on Hainan Island to become fully operational by 2020.

Perhaps most striking, however, is the clear signal that Beijing is sending in this white paper about the relationship between space systems and terrestrial objectives. The Chinese will target improvements in their space information services capabilities, for example, at areas with large numbers of ethnic minorities, border areas, and islands in the sea. This reflects the importance the Chinese leadership has placed on maintaining a grip on such restive areas as Xinjiang and such key locations as the artificial islands in the South China Sea.

Similarly, the white paper emphasizes the role that the Beidou navigation system will play in supporting Xi Jinping’s One Belt, One Road initiative. This multibillion-dollar effort is expanding Chinese infrastructure throughout both Central Asia (the Silk Road Economic Belt) and the Indian Ocean (the 21st Century Maritime Silk Road). The white paper indicates that basic services will be provided to nations on these two routes by 2018. By increasing these regions’ reliance on Chinese satellite navigation data, Beijing hopes to limit the inroads of American and Russian systems and their associated political impact.

The white paper makes few references to China’s growing military space capabilities. No mention is made of anti-satellite systems, much less likely future tests, but even this carefully edited volume notes that space plays a vital role in national security considerations.

What is clear is that the Chinese People’s Liberation Army (PLA) has been steadily expanding its portfolio of space capabilities. The PLA is responsible for operating all of China’s space infrastructure, from launch sites to mission control facilities to tracking stations and ships. It has tested a number of anti-satellite systems, including not only the 2007 direct ascent kinetic kill vehicle that generated enormous debris, but also a weapon designed to destroy satellites in geosynchronous orbit.[2]

These new capabilities are being incorporated into a new organizational structure. The recent PLA reforms unveiled at the end of 2015 and early 2016 include the establishment of the PLA Strategic Support Force (PLASSF). This new service (junzhong) brings together Chinese military space, electronic warfare, and network warfare capabilities and reflects the military’s holistic view of space. For the Chinese military, establishing space dominance is integral to the larger effort to establish information superiority. Consequently, the PLASSF is expected to coordinate space, electronic warfare, and cyber operations.

How America Should Respond

It is clear that China will be pressing forward with the development of its space capabilities, including new satellites, launchers, and facilities. Even more important, however, Beijing clearly views space as one of the many tools it can and does employ to further its overall political goals.

For the United States, including the incoming Trump Administration, it is therefore essential to keep from falling behind China’s burgeoning space efforts. It is equally vital that the United States integrate its space activities with its other political and diplomatic, economic, and military activities as part of its national strategy. Space policy should not be developed in a vacuum.

To this end, American leaders should take several steps to ensure that our space program remains at the forefront of our strategic thinking.

One of the Obama Administration’s major innovations has been increased reliance on the private sector to produce new approaches to managing and even to launching satellites. Coupled with interest from such entrepreneurs as Jeff Bezos and Elon Musk, the result has been a surge of companies striving to fill the gaps in America’s space capabilities. This approach should be sustained in the coming years, especially as the companies’ products mature and become increasingly reliable. Encouraging entrepreneurship and unleashing private-sector innovation will be crucial to rebuilding America’s lead in space.

About the author:
*Dean Cheng is a Senior Research Fellow in the Asian Studies Center, of the Kathryn and Shelby Cullom Davis Institute for National Security and Foreign Policy, at The Heritage Foundation.