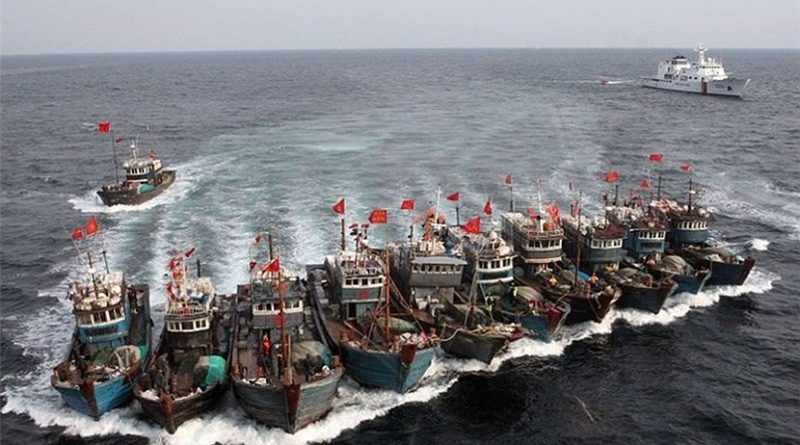 A well-known Washington DC based think tank has widely disseminated its latest ‘revelation’ regarding the ‘nefarious’ activities and intentions of China’s fishing fleet in the disputed Spratlys. https://amti.csis.org/illuminating-south-china-seas-dark-fishing-fleets/.

The author, Gregory Poling, the Director of the Asia Maritime Transparency Initiative at the Center for Strategic and International Studies used the output of a combination of remote sensing technology to detect the presence, type and movement of vessels in the area.   He concluded in particular that there was a massive presence of Chinese fishing vessels in and around Subi and Mischief Reefs as well as a lesser but still suspicious aggregation of them around Philippines occupied Thitu and Loaita and Taiwan occupied Taiping Dao. He then assumes that these are almost all Chinese maritime militia bent on intimidating and preventing legitimate activities of other claimants to the disputed Spratly rocks and maritime space. This is significant because it links to and supports the US narrative that China is “militarizing” the area and threatening others as well as the South China Sea sea lanes. But there may be other more benign explanations for these concentrations of Chinese fishing vessels.

The report says that a “gross [fishing] over capacity” combined with “their tendency to congregate around both Chinese-occupied reefs and those held by other claimants leads to the conclusion that most of these vessels serve, at least part time, in China’s maritime militia.”  According to Poling “None of these boats are actually fishing; every one appeared as maritime militia.” Further, many had their identification transponders turned off. https://globalnation.inquirer.net/171896/chinas-fishing-fleet-a-militia-force

Beating the drum for the narrative of the Chinese “maritime militia” threat, Poling warns that the numbers of maritime militia vessels in the Spratlys is “much larger and much more persistent than is generally understood”.

‘Maritime militia’ has been defined as “ships that appear to be crewed by civilians, but in all likelihood are actually controlled by state-sponsored forces taking orders from China’s military.” http://www.andrewerickson.com/2016/06/chinas-maritime-militia-what-it-is-and-how-to-deal-with-it/   According to Poling, the militia undertakes “missions to bolster China’s presence in contested waters”.

Chinese fishing boats have indeed intimidated and harassed opposing claimants and even US Navy intelligence collection probes in the South China Sea and they could do so again. But to imply that this massive concentration of Chinese fishing boats is just sitting there waiting for the call to do so is over the top. Indeed this new report is more a bias-driven belief than the result of careful analysis of all possible explanations for such a massive concentration of Chinese fishing vessels at these locations. Philippines President Rodrigo Duterte’s spokesperson said this latest ‘revelation’ is just “speculation” https://globalnation.inquirer.net/172484/palace-report-about-chinese-militia-on-spratlys-just-speculation

While this biased “speculation|” might be dismissed as a ‘one –off’, Poling and AMTI have been criticized before for their bias against China.  Moreover, Duterte’s policy of moving towards China and away from the U.S. has also been a target of Poling/AMTI’s criticism. https://ippreview.com/index.php/Blog/single/id/391.html; https://ippreview.com/index.php/Blog/single/id/620.html; http://www.cenpeg.org/events/2018/05-2018/The_Philippines_and_the_South_China_Sea.html

Indeed, the Philippines government has become rightfully wary of unsolicited advice regarding its relations with China from US-based think tanks that are preferentially concerned with US interests and not necessarily those of the Philippines. In August 2017, then Philippines Foreign Minister Alan Peter Cayetano scolded those who criticized the presence of Chinese ships near Sandy Cay based on AMTI reports, but did not criticize the presence of US warships in the disputed waters. He said  “You have to realize that their [CSIS/AMTI] reason for being is to pursue the interests of the American people.  We have to pursue Philippine interests”.  Regarding AMTI’s revelation of China’s construction on reefs it occupies, then Philippines Foreign Affairs Secretary Alan Peter Cayetano downplayed the report and the media hype based upon it. http://.philstar.com/headlines/2017/12/17/1769142/no-new-chinese-activity-scs-cayetano

He said “We’ve never said that they have stopped (building) or that there is nothing happening.  What we are saying is, they are not occupying areas that are not habited meaning they are not occupying new areas.  In Pag-asa we are repairing.  Malaysia, Vietnam, China are repairing but everyone is saying it’s defensive.”  http://philippineslifestyle.com/philipppines-tacke-south-china-sea/) If the foreign minister of a US ally and rival claimant to China implies that AMTI is slanting its research and results, perhaps it is time that CSIS/AMTI evaluated its research for bias either in its choice of research topics or in its analysis.

Regarding the most recent ‘revelation’, others have argued that the situation is not a simple picture of China using its fishing fleet to fulfill its strategic objectives.  They say the Poling/AMTI fishing militia narrative is hyped and ignores the more complex wider economic and social factors at work domestically in China. https://www.researchgate.net/publication/319122963_Fishing_Militia_the_Securitization_of_Fishery_and_the_South_China_Sea_Dispute

Others argue that the maritime militia narrative “overestimates Beijing’s centralized control of Chinese fishing activity which is usually under the control of provincial authorities”. http://www.eastasiaforum.org/2018/02/13/bigger-fish-to-fry-than-militias-in-the-south-china-sea/

He points out that there are many alternative explanations for the congregation of Chinese fishing vessels at these sites.  First of all these are after all Chinese occupied features so it is logical that Chinese vessels would anchor at China-occupied features there regardless of their purpose.  Some may be reef fishing for sea cucumbers and other valuable reef products such as giant claims and sea turtles. China has now made the harvesting of giant clams and sea turtles illegal, so such vessels may turn off their identification transponders while so operating. Others may be operating illegally for other reasons.  This could explain part of Poling’s deduced “darkness” of China’s fishing fleet.

Some of the larger Chinese fishing vessels are probably “support vessels” that purchase catches from and sell supplies to others.  Trading or barter exchange among fishers is common practice there. This could account for the presence of Chinese ‘fishing vessels’ there as well as around others’ claimed features According to Zhang, the state-owned Hainan South China Sea Modern Fishery Group Company- which is considered by some to be a leading maritime militia force – specializes in these aspects of the South China Sea fisheries.  Still other vessels may be transiting the area without fishing there just to qualify for special fishing – fuel subsidies for ‘operating’ in the Spratlys.

The point is that some analysts believe that everything China does in the South China Sea is part of a grand strategy to control it and thus read this intention into acts that may well have other explanations. While the behavior of China and other claimants and actors in the South China Sea could and should be greatly improved, not everything it—and they—do is part of a grand strategy for control. Such a rush to judgment calls into question these analysts’ related work and this is not helpful for their reputation for objectivity or for policy makers who may be considering acting on their advice.

This piece first appeared in the IPP Review.  https://ippreview.com/index.php/Blog/single/id/890.html

Home » Is the Threat Of China’s ‘Maritime Militia’ Being Hyped? – Analysis