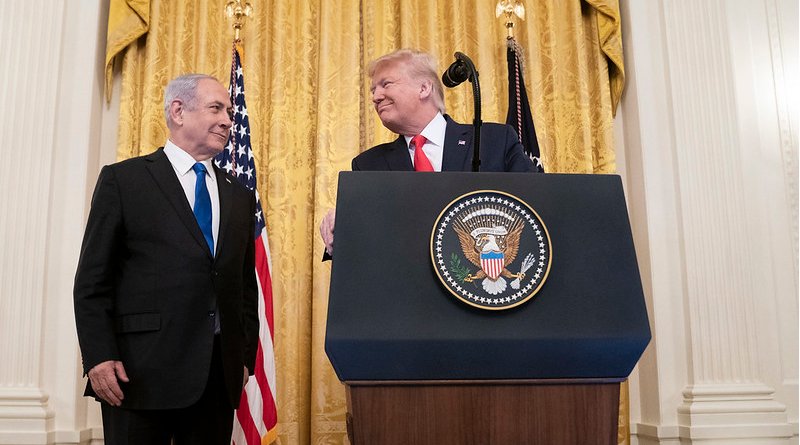 President Trump’s so-called Deal of the Century was revealed, like Salome, after a tantalising dance of the seven veils.  Again and again the world was promised that the plan would be revealed, only to be disheartened with a new postponement.  Titillated almost beyond endurance, a global TV audience was finally presented with the object of desire on Tuesday, January 28. With Benjamin Netanyahu at his side, Trump outlined his plan for a resolution of the unending Israel-Palestine dispute.

The revelation produced reactions both entirely predictable and astonishingly unexpected.

To be expected – and indeed anticipated for at least a year – was the response of the Palestinian leadership, led by PA president Mahmoud Abbas.  Trump had scarcely finished speaking before Abbas was addressing the party faithful in Ramallah.  “We say a thousand times: No, no and no to the ‘deal of the century,’” he declared, consigning it to “the dustbin of history.”

Abbas clearly hoped that Muslims the world over would rise up in support of his utter rejection of Trump’s proposals.  He summoned a crisis meeting of the Arab League for just this purpose.  This is not how matters are panning out.  In the event truly solid endorsement of the Palestinian position comes from two major non-Arab  players on the Middle East scene – Iran and Turkey.  Both, it might be legitimate to assume, are more motivated by anti-Israel than by pro-Palestinian motives.  Jordan formally endorses the PA’s position, although  the Jordanian Foreign Minister, Ayman Safadi, is reported as saying that his country “supports every genuine effort aimed at achieving just and comprehensive peace that people will accept.”

As for the majority of the Arab Muslim world, reaction to Trump’s proposals has been surprisingly muted.  Bahrain, Oman and the United Arab Emirates (UAE) sent their ambassadors in Washington to the White House as Trump was announcing the offer, and subsequently expressed support for the deal.

Shortly after Trump released the details of his proposal, Egypt issued a statement calling on both sides to consider the offer carefully, and to use it to re-open negotiation channels.

“In the absence of another political offer,” said an Egyptian diplomat, “and in view of the fact that this offer is actually re-engaging the US in the Middle East peace process, it is not exactly wise to jump to reject the offer. Egypt is not asking the Palestinians to take it as it is, but rather to read it and see how to negotiate their demands from there.”

The UAE media reported that the country backed the deal, and described it as an opportunity to achieve peace between Israel and the Palestinians.  “The only way to guarantee a lasting solution,” one report ran, “is to reach an agreement between all concerned parties…the plan announced today offers an important starting point for a return to negotiations within a US-led international framework.”

As for Saudi Arabia, the official response was one of qualified support for the initiative.  A Saudi foreign ministry statement, issued shortly after the release  ran: “the Kingdom appreciates the efforts made by President Trump’s administration to develop a comprehensive Palestinian-Israeli peace plan, and it encourages the start of direct peace negotiations between the sides under US sponsorship, in which any dispute regarding details of the plan will be settled. This is in order to advance the peace process and arrive at an agreement that will realize the fraternal Palestinian people’s legitimate rights.”

Political realities require all such positions to be nuanced.  Accordingly, parallel to the foreign ministry’s reaction, the Saudi press reported that King Salman had spoken by phone with Abbas, to “stress to him the Kingdom’s steadfast position vis-à-vis the Palestinian cause and the rights of the Palestinian people.”

Despite this, the general feeling within political and media circles inside the Kingdom is support for the Trump initiative.  Just as in Egypt, some commentators and leading figures have called on the Palestinians not to miss this opportunity, and to approach the plan with a positive mindset. According to a survey undertaken by the Middle East Media Research Institute (MEMRI) articles and tweets within Saudi Arabia have been saying that history shows that every plan offered to the Palestinians has been worse than the one before it, and that if they reject the Deal of the Century now, they will long for it in the distant future.

As an example, Saudi journalist Ahmad Adnan wrote in his column in the Saudi daily Okaz: “The PA has made negative statements against the deal. I maintain that at this stage it needs a friend to be honest with it, telling it and advising it: Sign the deal and then curse it as much as you want, day and night. The Palestinians have in decades past specialized in missing golden opportunities because of mistaken assessment of their capabilities and of the crisis.”

In short, with the exception of Palestinian opinion, much of the Arab world has offered a muted welcome to the Trump peace initiative, and is urging the Palestinians not to reject it out of hand, but rather to use it as the basis for serious negotiation.  It has, as its main objective, the eventual creation of a sovereign Palestinian state.  Underlying this stance is the fact that, for much of the Sunni Islamic world, the major enemy is Shia Iran, with its undisguised ambition to achieve both political and religious hegemony and its efforts – usually undertaken by its proxies – to undermine Sunni states.  To give only one example, Houthis have been firing Iranian-provided missiles into the centre of Riyadh.

The Sunni world, which lost faith in America during ex-president Obama’s flirtation with Iran, views the Trump administration, and increasingly Israel, as powerful allies against its main enemy.  Unfortunately, the Palestinian leadership is not moved by the same considerations.

Home » The Deal Of The Century: Islam Divided – Analysis

One thought on “The Deal Of The Century: Islam Divided – Analysis”