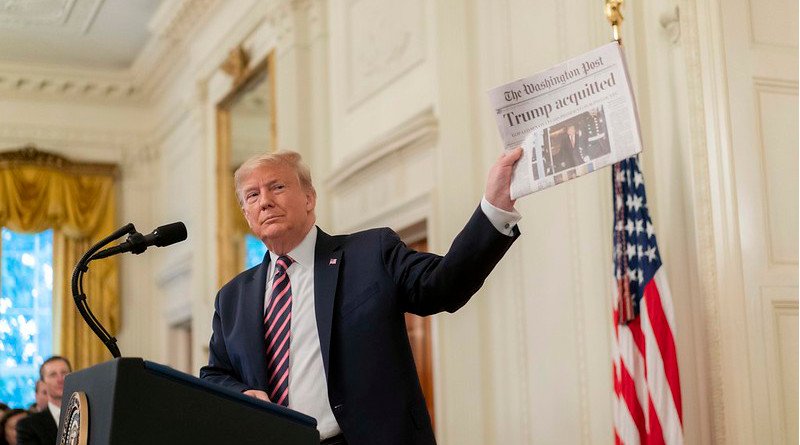 President Donald J. Trump shows a newspaper headline during his address Thursday, Feb. 6, 2020 in the East Room of the White House, in response to being acquitted in the U.S. Senate Impeachment Trial. (Official White House Photo by D. Myles Cullen)

President Donald Trump’s acquittal was never in doubt but how the voters will respond to the political turmoil of the last four months is very much in question.

The Republican-controlled Senate voted on Wednesday to reject the two articles of impeachment – abuse of power (52 to 48) and obstruction of Congress (53 to 47) – sent by the Democratic-controlled House. The vote was nowhere close to the two-thirds majority required to remove Trump from office.

Only one Republican was moved by the case enough to vote with the Democrats. Senator Mitt Romney crossed party lines and voted “yes” on the charge that Trump abused his power to pressure Ukraine to find dirt on his political rival, Joe Biden, who is running for the Democratic Party nomination. Romney’s vote was a historic first.

But the question remains that if the Democrats knew they didn’t have the votes, why did they stop their investigation to present an incomplete case to Senate Republicans and then ask for additional evidence and witnesses?

The Democrats’ explanation that there was no time to fight court battles over subpoenas and evidence has a strong element of politics – they wanted a verdict and therefore a talking point before the 2020 race heated up.

Then House Speaker Nancy Pelosi waited for a month before sending the articles of impeachment to the Senate. The move didn’t play well in the court of public opinion. Trump solidified support and the US economy was doing well. The impeachment has pushed his popularity to 49%, the highest he has enjoyed since becoming president.

That said the two political parties have never been farther apart as they are now. The pretence is gone and bitter partisanship is spilling out in the public.

The extreme polarization of American politics was in full view during Trump’s State of the Union address on Tuesday. Normally it’s an uneventful annual ritual where a president gives an accounting of his achievements and future plans. He is considered lucky if his speech writer can make an idea or a phrase stick.

But Trump’s SOTU address on Tuesday dripped in drama from start to finish. It was Candidate Trump, not President Trump who stood before the US Congress visibly exploiting a ritual for TV. He even engineered a military couple’s reunion who were separated because the husband was on a tour of duty.

He ignored the hand of House Speaker Nancy Pelosi, extended perhaps in peace, as he went up to the podium. It was a snub, no doubt, for Pelosi had initiated the impeachment process.

Not to be outdone, Pelosi returned the favour in kind. She grimaced and rolled her eyes for much of Trump’s long speech and then in her most dramatic gesture, tore up a copy of Trump’s speech in full camera view before Trump had left the chamber.

Pelosi justified her action saying Trump’s speech was a “manifesto of mistruths.” Jonathan Turley, a law professor at George Washington University who has appeared on behalf of Republicans but has written against their misbehavior also, said Pelosi had “forfeited the right to occupy” her office and should resign because she failed to maintain neutrality as speaker of the House.

“Such an indignity was not imposed on President Clinton during his own impeachment proceeding, and anyone respecting due process would note that Trump has been accused, not convicted, at this point in the constitutional process,” he wrote.

What about Trump goading liberals by giving the highest civilian award to Rush Limbaugh, an ultra-conservative whose xenophobia, racism and misogyny are well recorded. As First Lady Melania Trump put the medal around Limbaugh’s neck during the speech, the Republicans cheered and the Democrats seethed.

This is the state of political discourse in the world’s most powerful democracy today. Trump has an iron grip on the Republican Party and no one dare cross him, even when they disagree. Several senators agreed Trump’s pressure tactics with Ukraine were wrong but found a way to vote against impeaching him.

The Democrats, on the other hand, are fractured and in what appears to be a perpetual struggle over who owns the copyright to the soul of the party – moderates or conservatives or liberals or ultra progressives? The tussle is for real and supporters of various factions see the other as the enemy.

They also seem to have a technology handicap. If they can’t count the results of the Iowa Caucuses – results of the first intra-party vote to decide a frontrunner were delayed for two days because of an app malfunction. How will they run the economy, the Republicans have asked, only half in jest.

It is an apt metaphor for the broken times – a massive “Error 404 Not Found” message for the candidates competing to defeat Trump. Ironically, Joe Biden, a former senator and vice president, believed by centrist Democrats as the best choice against Trump came in a disappointing fourth in Iowa.

If Sanders keeps his momentum and wins the nomination, the Democrats will have had time explaining why socialism is bad for Venezuela but good for the US.

All told it hasn’t been a good week for the Democrats. They miscalculated Trump’s impeachment, couldn’t calculate results in Iowa and appeared churlish. The star of what should have been their drama was ultimately a Republican – Mitt Romney, who voted his conscience, not his political compulsions and broke from his party.

But it is a good week for Trump. It’s all but certain that he will get a bump from the impeachment. Besides, he is also lucky and nothing seems to stick to his Teflon coating.

Home » Trump Acquitted, Over To The American Voters – OpEd