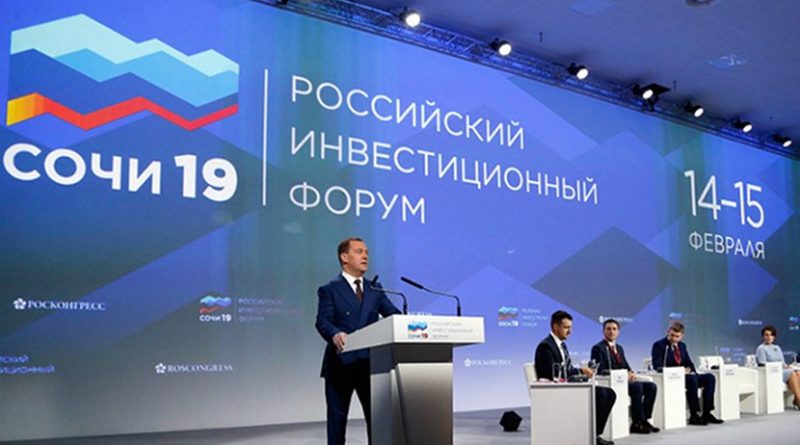 Participants of the Russian Investment Forum (RIF), which took place in Sochi on February 14–15, signed 567 cooperation agreements totaling more than 968 billion rubles. Last year this figure was 794 billion rubles, while the number of agreements was slightly less – 538.

Over 8,000 leading economists, experts, entrepreneurs, consultants, journalists, executives of large domestic and foreign companies, as well as politicians of all levels visited the event sites.

According to the organizers, the Sochi forum was attended by officials and businessmen from more than 65 foreign countries, including the US, Switzerland, the UK, France, Germany, Italy, China, the Netherlands and Japan.

The two-day business program included more than 70 events, which covered the areas related to socio-economic development of the regions, improving the quality and length of life, attracting investments in the digital economy, exports of agricultural products, and competitiveness.

Speaking at the plenary session of the RIF, Russian Prime Minister Dmitry Medvedev drew particular attention to the implementation of national projects. In his opinion, they are the way to solve problems in many areas.

“We certainly understand that our economy has major structural imbalances and that the sanctions pressure will continue […], that our infrastructure requires thorough modernization, and our education and healthcare systems are just on their way to the desired level. Most importantly, life in the country can still be difficult and people want social justice. Completing national projects is one of the ways to solve these problems, but it is important that the people in our country do not have to wait and just hope for better times, that they can see results every day,” Russian Prime Minister said.

“People trust not beautiful presentations and words but what they see with their own eyes, what is called, from their own windows. Building of a new road and a school, launching new bus routes, new ambulances, parks and embankments – these are real visible results,” he added.

Analyzing the results of the Sochi forum, President of the Russian Investment Agency (RIA) Yuri Spiridonov stressed that the RIF is becoming increasingly important platform for tackling critical issues.

“The Sochi forum is gaining momentum every year, its growth is noticeable in regard to the number of delegations, representation of countries, participants, and journalists. The range of issues under discussion is also expanding. In addition to the traditional themes of socio-economic development of the constituent entities of the Russian Federation, the best regional practices, this year’s forum voiced new directions: innovations in charity, social entrepreneurship, healthy lifestyle,” Yuri Spiridonov told PenzaNews.

According to him, the situation around the Russian investment climate is fairly good.

“Investments in the Russian Federation have been growing in recent years, albeit at a slow pace. We are now talking about foreign investment, because there are also budgetary investment funds, enterprises and individuals within the country. According to statistics, a surge in investment in the Russian economy occurred in 2017. Perhaps this is due to the implementation of large projects, such as the World Cup, the construction of the Crimean Bridge,” the RIA President said.

“The positive dynamics does not negate a number of systemic problems, but nonetheless the improvement of the investment climate in the Russian Federation was also noted by Ernst & Young audit and consulting company. For the first time, Russia was ranked seventh in the top ranking of the most attractive states for investors. The authors of the study took into account the number of projects with the participation of foreign capital, as well as the number of jobs created by investment,” he added.

In turn, Oleg Prozorov, Director General, the Belgian-Luxembourg Chamber of Commerce in the Russian Federation, drew attention to the high level of forum’s organization.

“The Russian Investment Forum in Sochi was flawlessly organized, like all the events held by the Roskongress Foundation. For us, as a chamber of commerce that unites the business community of Belgium and Luxembourg in the Russian Federation, the RIF is particularly interesting for the presence of representatives from all Russian regions: businessmen and members of regional governments. This allows us to effectively hold consultations on joint projects within the framework of the program and coordinate their implementation at a high level,” Oleg Prozorov said.

According to him, the forum has met all the expectations of the Belgian-Luxembourg Chamber of Commerce in Russia.

“We have an extensive business program for members of our chamber from Brussels and the Grand Duchy for the whole 2019. Together with the business community, we have already held a number of important meetings with regional leaders. Investment agreements concluded by our members, companies with capital from the Benelux countries, with Russian partners are of particular importance to us. We agreed on the participation of Russian entrepreneurs in events in Belgium, the Netherlands and Luxembourg,” said Director General of BLCC Russia.

He also noted that the issue of further increasing the investment attractiveness of Russia caused an active discussion at the forum in Sochi.

“Today, the conjuncture strongly depends on the international situation – so many rating agencies and experts, so many opinions. Among our members there is an understanding of the need to standardize regional preferences for investors, systematize the general directions of development of the entire economy of the country, and make the development strategy understandable and transparent. On all these issues, we are preparing a broad analytical background for the intergovernmental commission between the Russian Federation and the Belgian-Luxembourg Economic Union,” he said.

“Despite the notable improvement in the country’s ranking on Ease of Doing Business, several considerations prompt this perception: sanctions, the threat of additional sanctions and some recent events, such as the arrest of Baring Vostok’s Michael Calvey,” the analyst explained.

At the same time, he stressed that foreign investors who are already well-established in Russia will not, for the most part, consider quitting.

“The problem is the low level of interest from potential new investors, who are put off by sanctions and some recent events. Personally, I don’t think this is going to change until Russia’s political relations with the West improve. That could take quite a while,” Philip Hanson said.

“Within the framework of the discussion, we see really worthy proposals to be consolidated at the regulatory level, or in business practice. […]Unilever President in Russia, Ukraine and Belarus JV Raman took part in one of the most important sessions of the first day of the forum, dedicated to increasing the attractiveness of Russian industrial clusters and their further integration into global supply chains. This is […] a really topical issue for us, since we consider Russia as an industrial center, including for our export supplies,” Irina Bakhtina explained.

She reminded that Unilever is one of the largest exporters in the sector of consumer goods: supplies are made to North and Latin America, the EU, most of the states of the Middle East and North Africa, as well as to many countries of Southeast Asia and China.

“In this context, the topic that worried and continues to worry us so far is the recent revision of state approaches to the system of export subsidies, in particular, subsidies for transportation and logistics. Due to the geographical scope of the country, the costs of it can indeed have a decisive influence in shaping the final cost of export operations,” Unilever Vice President explained.

She added that during the event in Sochi, they managed to communicate productively with key speakers and clearly show how state subsidies help make Russian exports more competitive than exports from other countries.

According to her, during the forum, it was repeatedly stated that “isolation is not the most effective way for the growth and development of the national economy.”

“Russian industrial clusters, those high-tech manufacturing enterprises that today, thanks to large-scale investments, a constant program of renewal and introduction of new technologies, are able to produce competitive, high-quality, advanced products that meet the expectations of the global consumer and the largest global markets, cannot be excluded from the global system supplies by some inaccurate, harsh and under-weighted regulatory decisions. Their development, their future is a large integral part of the global economy,” Unilever Vice President concluded.