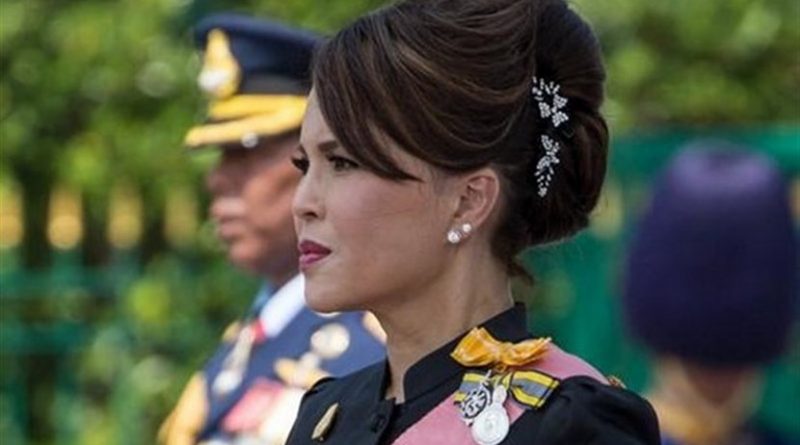 Thailand’s Constitutional Court on Thursday dissolved an opposition party linked to deposed former leader Thaksin Shinawatra, ruling it had acted in a hostile way toward the monarchy by nominating a princess as its prime ministerial candidate for upcoming elections.

Acting on a request from the election commission, a nine-judge-panel unanimously decided to disband the pro-democracy party associated with fugitive ex-Prime Minister Thaksin, who exerts influence over Thai politics despite living in exile. In addition, the Constitutional Court panel voted 6-3 to ban 13 Thai Raksa Chart executives from politics for 10 years.

“[T]he status of the monarchy which is above politics and political neutral was undermined. … The act is deemed being hostile to the constitutional monarchy in accordance with Section 92(2) of the Political Party Act, the court therefore ordered that the Party dissolved accordingly,” Judge Taweekiat Meenakanit read from the verdict broadcast to reporters gathered at the court house.

Thursday’s ruling to disband the party, which came 17 days before the general election, was the latest in a series of decisions taken by the same court against parties or governments aligned with Thaksin and his sister Yingluck, who were ousted by military coups in 2006 and 2014, respectively.

Another judge said King Rama VII, who abdicated the throne in 1932 and lived in exile in Great Britain until his death, had wished to keep the royals completely out of politics. The party’s nomination, which aimed to have a royal gain administrative power while having the king as the head of state, was deemed to be unconstitutional and subversive, the panel said in its decision on Thursday.

“After hearing the court ruling, I and the party’s executives reaffirm that we honor the royal decree given on Feb. 8 and we are loyal to the king and all royalties,” Preechapol told reporters at the court.

“The disbanding certainly impacts basic rights and freedom, at least those of the candidates and people who are heading for the March 24 elections,” he said.

“We sincerely want to steer the country to the right direction and do good things. … Though we cannot get to the goal, I thank you of all who walk with us,” Preechapol added.

Princess Ubolratana, who was in Germany, reacted to the decision with a posting on her private Instagram account.

“I’m acknowledged (of the news). It is a sad story,” she wrote, according to the Matichon online newspaper.

A police official said thousands of personnel were deployed around the court and in suburban Bangkok to maintain order.

“I feel sorry that Thai Raksa Chart Party is dissolved and the party executives are banned because they are a young generation who could change the nation,” supporter Napassorn Boonlee told reporters at the court house in Bangkok. “Never mind, we will vote for pro-democracy parties Chat Thai, Pheu Chart, we don’t accept a dictator.”

The same court toppled Thaksin, in 2006, and his younger sister, Yingluck Shinawatra, in 2014, from the prime minister’s office and disbanded two other political parties linked to the Shinawatra dynasty, Agence France-Presse reported.

Through Thursday’s action the Thai Constitutional Court had now “dissolved three pro-Thaksin parties and ousted three pro-Thaksin governments – with two more ousted by coups,” Jonathan Head, the Southeast Asia correspondent for BBC News who is based in Bangkok, said via Twitter.

“It’s worth remembering that the Constitutional Court is viewed as partisan by many Thais,” he said. “[N]o other political faction has been dealt with like this.”

Human rights groups spoke out against the court’s ruling as well.

“This decision highlights the Thai authorities’ abuse of judicial powers to restrict the peaceful association and expression of the political opposition. This far-reaching measure raises strong concerns about the human rights to freedom of association and expression in the period leading to the elections,” Amnesty International’s (AI) Thailand campaigner, Katherine Gerson, said in a statement.

“Thailand’s military junta and the Palang Pracharath Party it controls have used numerous dirty tricks to tilt the political playing field their way. Playing in their favor has been an election commission of Thailand composed of commissioners hand-picked by the junta who rushed to send this case to the Constitutional Court, which quickly obliged by issuing a highly questionable verdict that destroyed a major opposition political party,” HRW Asia Director Brad Adams said in a statement sent to BenarNews.

“The big losers today in the dissolution of Thai Raksa Chart Party are the Thai people and their hopes for a return to a rights-respecting democracy.”

“The dissolution of Thai Raksa Chart Party may catalyze supporters of Pheu Thai to vote because they were bullied,” Titipol Phakdeewanich, dean of the political science faculty at Ubon Ratchathani University, told BenarNews.

“But I don’t think the politic after this would see violence because everyone wants elections. Holding street protests will simply give a pretext to the military to delay the polls.”