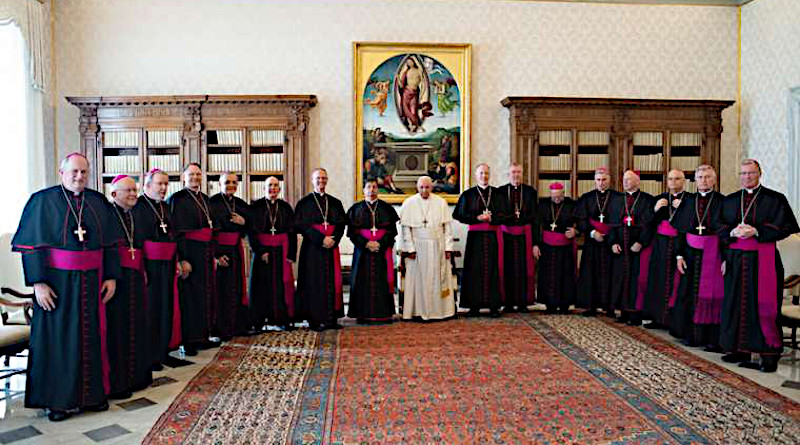 Pope Francis received at the Vatican members of the USCCB Region XII for their “ad Limina Apostolorum” visit on Feb. 3, 2020. Credit: Vatican Media

For some time, a narrative has developed among Catholic pundits and observers suggesting that Pope Francis and the bishops of the United States do not get along with each other.

While much of that narrative has been a creation of media spin, relationships between the U.S. bishops and the Holy See did, in fact, decline in recent years amid the real tension occasioned by the McCarrick scandal.

But things have changed in the last six months, and it has become more difficult to posit a gap between the pope and the U.S. episcopate.

Since November, bishops from across the United States have returned from their recent ad limina visits full of praise for Francis.

Months of papal meetings with American prelates appear to have proved a quiet, but noteworthy, triumph of pastoral diplomacy at a crucial moment.

The media’s narrative regarding ecclesial tension usually centers around the publication of Amoris laetitia, the pope’s 2015 apostolic exhortation on the family. A footnote in the text appeared to leave open the possibility of a shift in Church teaching on divorce and remarriage, and that alarmed many Catholics, including bishops in the U.S., and further afield.

While any actual shift in doctrine and practice failed to materialize, a steady drumbeat of informal interpretation away from the Church’s teaching led to the presentation of the famous dubia by four cardinals, among them Wisconsin-born Cardinal Raymond Burke, thereafter styled an “ultra-conservative” in many media outlets.

The same coterie of unofficial papal interpreters went on to publish critiques of American politics, culture, and religiosity.

Media framing of some off-handed papal comments, like his narrowly framed “who am I to judge” remark on priestly sexuality, was used to feed a narrative, pitching American bishops as opposed the pope in tone and direction. Senior American prelates like Archbishop Charles Chaput were given the near-ubiquitous descriptors “right-wing” or “archconservative” in editorials.

Meanwhile, some prominent U.S. lay Catholics took to speaking out against the pope’s perceived agenda of reform, and the impression grew that American had become a counter-axis to Rome in Catholic thought.

If these early tensions could be attributed to media spin and crossed wires, an actual nadir in Roman-American relations was reached in 2018, with the publication of allegations of sexual abuse of minors and seminarians against Theodore McCarrick.

Francis acted swiftly to respond to the scandal, which went to the heart of the American hierarchy, first removing the red hat from McCarrick and then effectively sentencing him to a life of prayer and penance before his canonical process had even begun.

Despite this early action, the subsequent accusations made by Archbishop Carlo Maria Vigano and the intervention by Rome during the 2018 USCCB meeting in Baltimore, which prevented the American bishops from passing their own emergency measures on episcopal accountability, were met with barely concealed outrage by some.

Bishops like Joseph Strickland of Tyler broke cover, calling the Vigano allegations – which came with a call for the pope to resign – “credible” and demanding action.

As the bishops waited for the pope’s own reforms, which came the following year in the form of Vos estis lux mundi, and for the McCarrick report, which is still on the papal desk, patience wore obviously thin.

Yet many of the same bishops supposedly implacably opposed to Pope Francis have now returned from Rome singing his praises.

After meeting with the pope in January, Strickland announced that “Pope Francis was great.” He also walked back his support for Vigano, saying he “never intended” to embrace the former nuncio’s call for the pope to resign.

“[It] makes you realize that it’s always a bigger picture than maybe the slice you are looking at,” Strickland said after sitting with Francis in January. “I certainly am not ready to judge the actions in the moment of any of the pontiffs.”

Francis was more than typically generous with his time, as the American bishops took turns filing through Rome, offering them two hours or more at a time to sit and discuss their priorities and concerns. That generosity has shown results.

It “was a beautiful meeting,” he said.

Archbishop Timothy Broglio of the Military Archdiocese said the pope “was very open to our commentary and he basically left the themes we would treat, he left that to us, what we would introduce, what we would ask.”

“He was very friendly. We talked about all sorts of things, from the formation of priests to preaching the Gospel in today’s world, to also working together as an episcopal conference.”

Beyond addressing the bishops’ desire for the McCarrick report, the pope showed a willingness to speak to distinctly American concerns, and even the internal politics of the USCCB, in which some bishops have portrayed themselves as interpreters of the pope among their brothers.

During the last USCCB meeting in November, temperatures rose during a debate about the “preeminence” of abortion as an issue in American public life.

A barbed floor intervention from Bishop Robert McElroy appeared to suggest that bishops who think that abortion ought be the preeminent social concern are out of step both with Pope Francis and Church teaching.

Archbishop Chaput responded, to applause from the other bishops, saying “I am against anyone saying that our stating that [abortion] is preeminent is contrary to the teaching of the pope, because that isn’t true. It sets up an artificial battle between the bishops’ conference of the United States and the Holy Father, which isn’t true.”

Archbishop Joseph Naumann, who chairs the conference’s pro-life committee, discussed the matter with Francis directly during his own ad limina in January.

According to Naumann, Francis encouraged “identifying the protection of the unborn as a preeminent priority.”

“His response to that was, ‘Of course, it is. It’s the most fundamental right,’” Naumann said at the time.

Another hot-button subject Francis willingly discussed with American bishops was the LGBT-themed ministry of Jesuit priest Fr. James Martin, which has divided opinion across US dioceses.

According to several bishops, Francis made clear during one ad limina session that his reception of Martin in a much-tweeted meeting last year was not an implied endorsement of the priest’s work, and that the pope was not at all impressed with the way the meeting had been used to frame Martin’s public profile.

While confirming the pope’s expression of frustration about the meeting’s framing, Archbishop John Wester disputed reports from some bishops that the pope said Martin and his superiors had been contacted about the affair, while affirming that his recollection that there was indeed mention of ecclesiastical leaders needing to clarify some aspects of Martin’s ministry. Wester also challenged a description of the pope’s facial expressions.

The archbishop noted, however, “our meeting with the pope lasted almost two hours and forty-five minutes, so it is difficult for anyone to remember with precision anything that was said.”

While Fr. Martin’s more vocal supporters on social media have made a great deal of those disagreements, all the bishops agreed that the pope had been frank in voicing his concern with how Martin’s meeting had been used in the media – showing him happy to wade in to a contentious matter for the US bishops, and to speak his mind.

The result of the pope’s conversations is that, while the bishops may not be nearer to agreement on some issues, they are apparently united in their appreciation for the pope – something that would have been difficult to say just a few months ago.

Critics of the pope often cite his preference for private discussions over public statements. Indeed, the does appear to lean towards individual conversations instead of making broad interventions on singular issues. But as the recent US ad limina tour has shown, this can have the effect of forging a personal and pastoral bond between prelates and the pope – the same relationship he encourages bishops to have with their own priests.

While Francis himself may be simply attempting to lead the bishops by example, his efforts could prove to be a quiet but important diplomatic triumph.