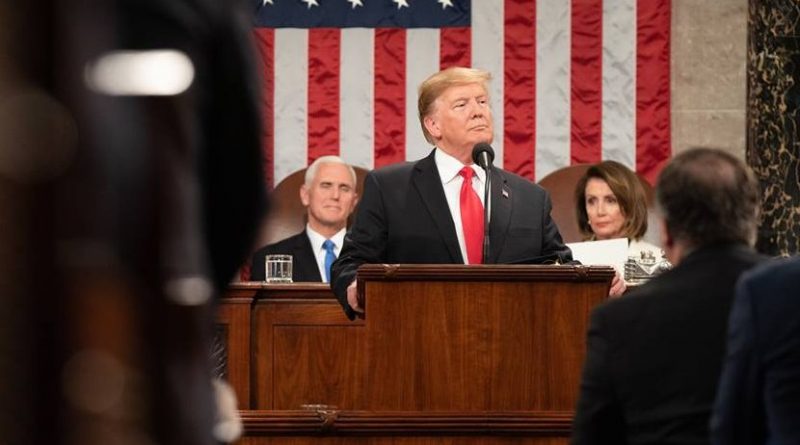 Going into the third year of President Trump’s presidency, it is necessary to draw a balance sheet on who is winning and/or losing.

Power Bases of the Parties

The Democrats received the support of four major television propaganda outlets (ABC, NBC, CBS, NPR), to one for the Republicans (FOX). The news print media reflected a similar advantage for the Democrats – the NY Times, the Washington Post, The Financial Times backed the Democrats while the Wall Street Journal leaned to President Trump with notable exceptions on trade policy.

The Democrats succeeded in diverting President Trump from most of his political agenda via prolonged ‘hearings’ on Russia, and charges of Trump collusion ; the Mueller investigation; the funding of the US-Mexico border; and other peripheral issues.

President Trump succeeded in major tax cuts for the wealthy – with the support of the Congressional Democrats – a major win.

The principal programmatic issues proposed by both parties were never raised.

The Democrats ecological agenda and international accords were defeated by Trump; on the other hand the Republicans failed to reverse most of the existing environmental agreements.

Trump succeeded in reversing or revising US trade agreements especially the Trans Pacific Partnership, the US-Iran Nuclear (and sanctions) Agreement, and revision of NAFTA. The Democrats were divided and ineffective critics.

While both the President and Congress claimed to support a massive multi- billion-dollar federal infrastructure program to rebuild the crumbling structures, nothing was done.

The Trump administration promise to ‘re-industrialize’ the US was a failure, as several major manufacturers left, and a few returned to the US.

Growth was largely in the ‘service sector’ especially at the high end of finance and the low end – in nursing homes, restaurants and cleaners.

Democrats promoted the elite in Silicon Valley and billionaire retailers like Amazon.

In a word the economic policies of both the President and Congress failed to promote ‘structural changes’; their major tax reforms were regressive; severe income inequalities remained in place.

Trump increased gender, racial and sexual discrimination, while the Democrats opposed his policies with mixed results.

Trump encouraged the far-right to mobilize against abortion and in support of police violence against Afro-Americans; the Democratic Party provided verbal opposition to Trump’s rollback;most of their energy was directed to peripheral issues — Trump’s sexual escapades and other personality issues.

President Trump’s electoral agenda promised to end US military intervention in Syria, Afghanistan and Iraq. The Democrats were opposed and condemned his ‘appeasement’. The Democratic Congress joined forces with Trump’s neo-conservative cabinet and Senate hawks in reversing Trump’s agenda – he retained troop everywhere; and extended sanctions against Russia, Iran, Venezuela and China.

The Democrats joined with US multi-national corporations in defense of ‘globalization or free trade, defeating Trump’s initial protectionist “America First” policies. In the end Trump combined the worst trade policies of the Democrats in Congress with the war policies of key senior Cabinet members (Pompeo, Bolton, Abrams et al.).

Led by the Democrats, Trump’s administration equated criticism of Israeli war crimes with ‘anti-Semitism’ and sought to make it a criminal offense.

Trump’s original overtures to improving relations with Russia were reversed. Under Democratic pressure via the Mueller ‘show trials’ the Trump Administration joined the anti-Russia chorus.

Likewise with China, Democrats demanded a ‘turn to Asia’ which included trade sanctions and restrictions; Trump went one step further by promoting a trade war.

Trump sanctions and coup policies directed against Venezuela’s elected government followed in the footsteps of the Obama regime – with greater force. The majority of both parties –with the exception of a handful of junior Democratic Congresspeople– support US intervention including a pending US military invasion.

While Trump broke the Iran nuclear agreement negotiated by Obama, many if not most of the Democrats did not object because of their close ties to Israel.

Neither President Trump nor the Democratic Congress have secured clear and decisive victory in their ongoing political conflicts and spats.

Trump has failed to reduce the trade deficit – in fact it has risen over the past two years.

Democrats have trumpeted the result but cannot claim that they have an alternative. Trump succeeded in raising the military budget with the backing of the Democrats, ignoring social needs. Trump succeeded in reducing taxes for the rich. Despite critics on the left of the Democratic Party, most of its leaders joined the Republicans ,simply mouthing verbal criticism of Trumps tax give away as ‘one-sided’.

Trump has been defeated on the issues of abortion, gay and minority rights but the Democrats have failed to advance the struggles, especially the issues of police violence against racial minorities.

Trump has blocked any attempt to introduce a national public health program for all. But a majority of Democratic legislators have sided with Trump, despite the fact that the voters from both parties support it.

The biggest victory for the Democrats has been to divert Trump from his political and economic agenda through public hearings and Congressional investigations into his hush money payoffs, private real estate deals, dubious tax payments and his supposed meetings and chats with “the Russians”.

Trump initially promised to reduce the US military presence but under pressure from his own Cabinet and advisors, recommitted US troops to all the losing war zones – including the US originated wars in Syria, Afghanistan, Somalia and Libya.

Likewise, Trump opened the door to negotiations with Russia and North Korea but retracted under attack from his Cabinet and the Democratic majority.

In a perverse manner, the Democratic Congress has defeated Trump on his initial peace initiatives and scored wins in lowering funding for the President’s Mexican border wall.

In sum, the Democrats ‘victories’ have exacerbated the state’s global war agenda.

The Democrats domestic victories have led to the blocking of parts of Trump’s reactionary domestic program.

The ‘victories’ of both parties have had a regressive effect on the vast majority of workers and employees.

At most, political diversion have prevented further regression.

Clearly the so-called ‘division of powers’, ‘competitive parties’ and ‘bipartisan’ politics have not led to ‘representative government’ or democratic results.

Regardless of whether one party or the other wins, the people lose. In the best of current circumstances, the best outcome is when both parties prevent each other from imposing their policies.

The score card on Trump’s 2020 budge is designed to secure the support of (1) the military industrial complex by adding over $208 billion to war spending. (2) upper class plutocrats through tax reductions (3) satisfied bankers by reducing the fiscal deficit by savaging essential popular programs including cutting $1.5 trillion from Medicaid and $845 million from Medicare over the next decade.

Trump proposes to slash $25 billion from social security and disability spending over the same deadly decade.

His payola for the corporate oil and gas oligarchs includes a 70% reduction for renewable energy.

Trump’s budget is a ‘poverty program’ against wage and salaried workers.

Trump wants $8.6 billion for the Mexican border wall which the Democrats will resist up to a point.

Trump scores high for the elite but low for the working class. But the Democrats have yet to challenge Trump’s war budget; they are deeply divided over whether to reverse his priorities and reallocate the military budget to great social expenditures and increase taxes to balance the budget.