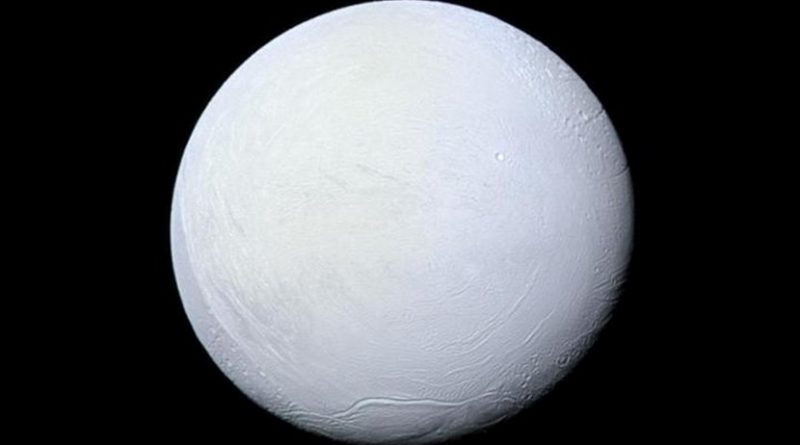 During its 'snowball' phase, the Earth may have resembled Enceladus, a moon of Saturn that is covered in snow and ice. Credit: NASA/JPL-Caltech/Space Science Institute

A research duo from The University of Texas at Austin and UT Dallas have put forward a hypothesis that links the dawn of plate tectonics with “snowball Earth”–a period of climate change that sent the planet into a deep freeze that lasted millions of years.

They expect their hypothesis to generate controversy. Geologists usually place the start of plate tectonics at about 3 billion years ago, while the new hypothesis puts the process in a much younger era known as the Neoproterozoic, which occurred about 542 million to 1 billion years ago.

“If you look at the preserved record, diagnostic evidence for modern plate tectonics involving deep subduction is mainly Neoproterozoic and younger,” said co-author Nathaniel Miller, a research scientist in the Department of Geological Sciences at the UT Austin Jackson School of Geosciences. “But most people think we had this much earlier in Earth history.”

Miller and Robert Stern, a professor in the UT Dallas Department of Geosciences, examined a suite of published scientific data on the geological activity during the Neoproterozoic–the era of snowball Earth–and found a link between plate tectonics and a cooling world.

The research was published online in December 2017 and in the April print edition of the journal Terra Nova.

The Earth is the only planet known to have plate tectonics, with its crust and upper mantle being made up of distinct pieces that move slowly and independently, creating and destroying landforms and producing volcanoes and large earthquakes.

Plate tectonics is one of the most fundamental processes that shape the planet, and most geoscientists believe it has been active for most of the planet’s 4.5 billion-year history. However, according to Miller and Stern, there are a variety of traces in the geologic record that could be consistent with plate tectonics not getting started until the Neoproterozoic.

For example, rock formations, gemstones and chemical signatures known to be associated with plate tectonics date only as far back as this period; and computer models suggest that the Earth didn’t cool to temperatures required for plate tectonic activity until then. The authors also note the geologic interval preceding the Neoproterozoic shows a lack of geological activity–a feature that has it earned it the nickname “the boring billion,” and which could indicate that the Earth was covered by a single lithospheric lid rather than the many moving plates of today.

The overlap in timing between the appearance of these signatures of plate tectonic activity and Earth’s snowball phase led the researchers to think that they could be related, and that the drastic climate change could be a consequence of the Earth’s transition from single lid to plate tectonics.

“This climate crisis could have been caused by a number of proximal causes, but the overall great cause was this revolution in Earth’s tectonic style,” said Stern.

The paper lists 22 proposed ways plate tectonic activity could have brought about global cooling that caused the Earth to be covered from pole-to-pole with ice. They include explosive volcanoes cooling the planet by releasing sulfur into the atmosphere; the shifting of the plates changing the planet’s rotational axis; and increased rock weathering pulling CO2–a greenhouse gas–out of the atmosphere and back into the Earth.

In the study, researchers also considered potential non-tectonic reasons for cooling that came from space–from asteroid impacts, to the collapse of ice rings that could have formed around Earth. If these were the cause of snowball Earth, Stern and Miller’s theory falls apart–but there’s not much evidence to support these triggers.

While all the potential cooling mechanisms were first described in other research papers, Stern said that he and Miller are the first to raise the possibility that each could be related to the transition to plate tectonics–an idea that he describes as radical.

“People have been saying for a long time that we have always had plate tectonics…but I think this might be a failure of imagination,” Stern said.

Graham Shields, a professor of geology at the University College London who was not involved with the study, said that the theory Miller and Stern propose needs more evidence before snowball Earth can be linked to the start of tectonics rather than just a period of tectonic activity.

“How do we distinguish their tectonic onset hypothesis from other hypotheses, most of which are also related to tectonics and the well-established supercontinent cycle,” Graham wrote in an email reply.

The authors note that their paper presents a possible scenario in Earth’s history, and that more research is required to test the link between the dawn of plate tectonics and snowball Earth. They hope that this research will lead other geoscientists to consider the evidence and test the hypothesis.

“Revolutions in our field don’t happen often or very easily,” Stern said. “You plant ideas and then you go and look for more data that either supports them or refutes them.”

Home » Dawn Of Plate Tectonics Could Have Turned Earth Into Snowball