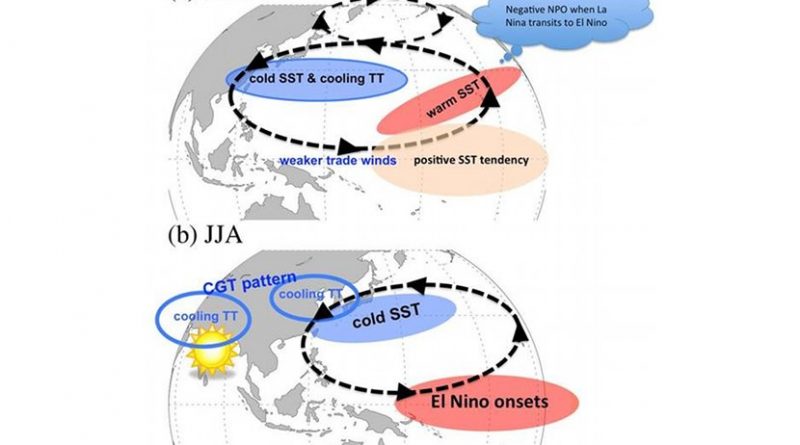 Conceptual plot of air-sea interaction in (a) MAM and (b) JJA on sustaining the crucial circulations associated with PSSD over North China. Dash and solid lines denote the low-level and up-level circulation anomalies, respectively, while shading shows SSTA. (Image by IAP) Credit: Lixia Zhang

North China, where almost half China’s population lives and most wheat and corn are grown, is facing serious water crisis. Since the late 1990s severe and extreme droughts have frequently dropped by and drought affected area has been increasing by 3.72% decade-1 in the past five decades, posing great challenges for regional sustainable development.

Scientists have been concerned that if climate continues to warm in the future, there is a high confidence level that drought over North China will continue to increase. Thus, it is of great importance to identify the drivers and dynamic mechanisms of North China drought in order to improve drought prediction and better water management.

A recent study published in Journal of Climate by scientists from the Institute of Atmospheric Physics at Chinese Academy of Sciences, Met Office Hadley Centre and Beijing Climate Center revealed the large-scale dynamic drivers of the prolonged spring-summer drought (PSSD) over North China, where prolonged drought tends to onset in spring and persists to summer with severe societal impacts.

Their study shows that seven of the selected eight North China PSSD events occurred when La Niña transited to El Niño with a negative North Pacific Oscillation (NPO) phase in preceding winter. The two key circulation anomalies in spring are set directly by a negative NPO phase generated in the preceding winter.

This study demonstrates that ENSO phase transition from La Niña to El Niño is one of the important precursors of North China PSSD.