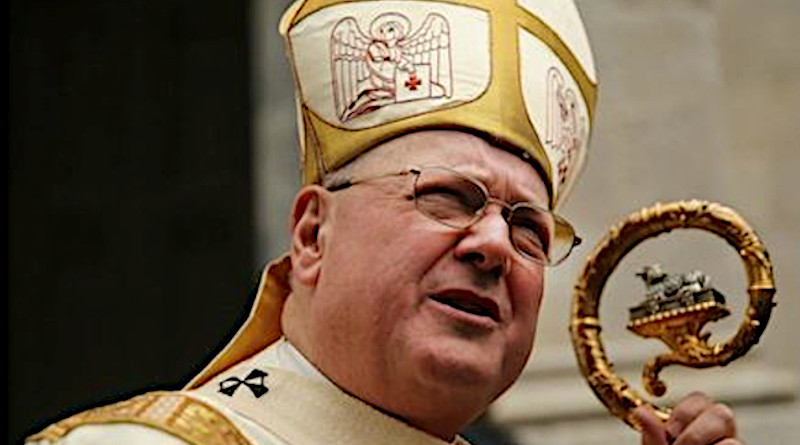 Cardinal Timothy Dolan is the source of one of the most unprincipled and well-orchestrated attacks against a bishop to surface in many years. The politics that underscore the campaign are palpable.

The trigger for this onslaught was a conference call that 600 Catholic educators had with President Trump on April 24. The president asked Cardinal Dolan to begin the exchange; the New York archbishop obliged. Days later Dolan appeared on “Fox and Friends” and took the opportunity to praise the president for his outreach to the Catholic community and for what he has done to promote religious liberty.

This is pretty standard stuff. The president of the United States wants to curry favor with religious leaders and religious leaders want to curry favor with the president. They both have something to gain by coming together, at least on some issues. Conversely, both parties have much to lose if they decide not to play ball. Grownups understand how this works. Indeed, many bishops (including Cardinal Dolan) did not hesitate to praise President Obama, even though they disagreed strongly on some key issues.

Some of Dolan’s critics are not grownups—they are hopelessly naïve— hence their inability to process these events. Most of them are worse: they are simply duplicitous. No matter, they have their friends in secular circles covering for them.

“Progressive Catholics and others who want to keep their church out of politics were dismayed” [by Dolan’s cordiality]. This gem is courtesy of National Public Radio. The truth is that nothing makes progressive Catholics happier than when they are politicizing the Church. What they object to are instances when their politics are not being adopted.

Two columnists from the National Catholic Reporter, a publication that openly rejects the Church’s teachings on marriage, the family, sexuality, priestly celibacy, ordination, and other issues, were first out of the box to criticize Dolan. They were followed by a reporter for America magazine, a Jesuit publication whose theological meanderings have drawn the attention of the Vatican. Then came the letter to Dolan lecturing him on putting “access to power before principles.”

Talk about calling the kettle black. Those who signed the letter, at least those who have a public name, are not known for their principled fidelity to the Church’s teachings on an array of issues, most of them dealing with sexuality.

The letter campaign was funded by the number-one enemy of the Catholic Church: George Soros. The atheist billionaire funds John Gehring’s Faith in Public Life, and the letter to Dolan was written on the organization’s letterhead. Gehring was the first to sign it. It does not speak well for the Catholic signatories that they allowed themselves to be used by Soros.

Soros funds dozens of organizations, both nationally and internationally, that have attacked the Catholic Church. They range from Catholics for Choice, an anti-Catholic front group with no members, to a host of pro-abortion entities.

In 2012, I outed Gehring when he sought to manipulate the media against the bishops. In a document that was leaked to me, Gehring sent a memo to reporters on June 7 instructing them how to frame their questions to the bishops concerning their “Fortnight for Freedom” initiative, a religious-liberty series of events. For example, he recommended they ask, “Are you willing to sacrifice Catholic charities, colleges and hospitals if you don’t get your way on the contraceptive mandate?” Once I unmasked Gehring, the bishops ripped him in a long statement.

Gehring previously worked for Catholics in Alliance for the Common Good (perversely, he also worked for the bishops’ conference). It was a dummy Catholic front group, funded by Soros, that was created by John Podesta. Wikileaks disclosed that Podesta launched this group so they could infiltrate the Church and ultimately undermine it. This was part of the “Catholic Spring” revolution sought by the enemies of the Catholic Church.

Sister Simone Campbell was next to sign the letter. She showed how principled she was when she spoke at the 2012 Democratic National Convention supporting President Obama’s Health and Human Services mandate: it required Catholic non-profits to pay for abortion-inducing drugs in their healthcare plans. Campbell is also on record saying abortion should not be illegal—she would never say this about racial discrimination—and more recently she has thrown her support behind the Equality Act, the most anti-religious liberty piece of legislation ever written.

Sister Pat McDermott, President of the Sisters of Mercy of the Americas, is the third name listed on the letter. She proudly defended Sister Margaret Farley when the Vatican concluded that her book on sexuality contradicted the Church’s teachings; the nuns are big fans of gay marriage.

Another signatory, Father Bryan Massingale, is so wedded to the gay rights movement that he gave a talk in 2017 on this subject before New Ways Ministry. It is a rogue Catholic entity that has been condemned by senior bishops in the United States, as well as the Vatican, for its promotion of homosexuality. He teaches at Fordham, a Jesuit school where the chairman of the department of theology claims to be married to his boyfriend.

Stephen Schneck’s name on the list is no surprise. He got no blowback from his “principled” colleagues when he signed a “Statement of Principles” in 2006. It was not only a full-throated endorsement of abortion rights, it maintained, falsely, that it is entirely legitimate for Catholics to depart from the Church’s teachings on this subject.

The latest attack on Cardinal Dolan is from Sam Sawyer, a Jesuit who works at America. He is in anguish. Dolan’s comments have caused “actual pain,” “fear,” and “suffering.” Wow! His threshold for pain must be quite low. Either that or he is playing us.

Sawyer is unhappy that Dolan and other bishops on the call “did not challenge the president or voice reservations about his policies.” He brands this a “pastoral failure,” and is particularly piqued at Dolan for the manner in which he made his remarks (they were too cheery).

Here is what America said in 2009 when some Catholics, including bishops, reacted negatively to the news that President Obama was invited to speak at the University of Notre Dame. “If the president is forced to withdraw, will that increase cooperation between the Catholic Church and the Administration, or will it create mounting tensions and deepening hostility?” Sounds like they wanted our side to play ball. So why the double standard?

In a plea to be realistic, the editorial said, “Taking account of what serves the greater good of the mission of the church is not opportunism. It is what Catholic tradition calls prudence.” Well said. But why wouldn’t this apply to Dolan as well?

“The bishops and the president serve the same citizens of the same country. It is in the interests of both the church and the nation if both work together in civility, honesty and friendship for the common good, even where there are grave divisions, as there are on abortion.” Why doesn’t this principled stand apply to Dolan?

Here’s my favorite. The editorial says that “it does not improve the likelihood of making progress on this and other issues of common concern if we adopt the clenched fist approach.” That is exactly what all of these critics are doing—adopting a “clenched fist approach” to President Trump, hammering Dolan for not punching back.

When Pope Francis came to the U.S. in 2015, he made an impassioned speech to some 300 U.S. bishops. He implored them to “face [the] challenging issues of our time,” hastening to add that they refrain from using “harsh and divisive language.” He understood that if the bishops are going to participate in the public square, they need to do so without alienating those they seek to persuade.

A conference call is not the right place to settle differences. That can be done in other settings. Those who run organizations know this to be true. Those who opine for a living haven’t a clue.