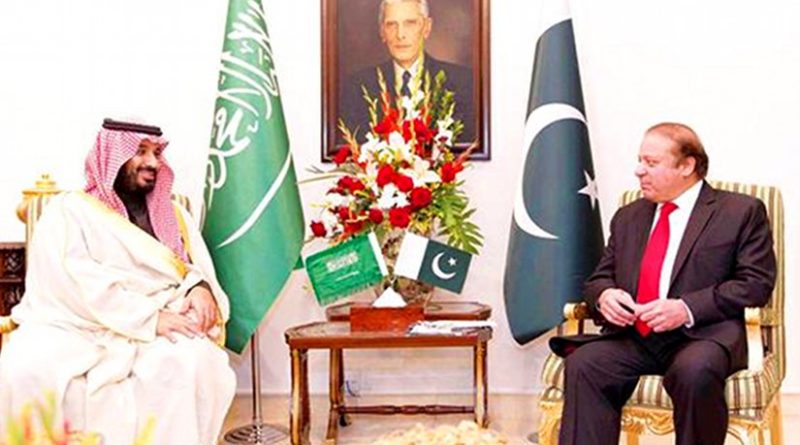 Keeping Pakistan’s strong diplomatic relations with the Middle Eastern countries, it is in best favor of Pakistan to keep a balanced stance of the current Qatar-Gulf rift.

Saudi Arabia, Egypt, Bahrain, Libya, Maldives, Yemen and United Arab Emirates have cut off their diplomatic ties with Qatar over its alleged support of terrorism. Yemen, Maldives joins Saudi Arabia, Bahrain, the UAE and Egypt in suspending relations, whereas, Qatari nationals given two weeks’ notice to leave the UAE. Qatar says that this move by the Gulf countries is “unjustified” and expresses “deep regret” over the decision. According to experts, tensions between the Arab Gulf states and Iran will not only have an effect on the Middle East, but the fallout from these diplomatic tensions will also affect South Asia. That is precisely the reason that this move by Saudi Arabia and its allies has put Pakistan in a difficult position with regards to the regional politics of the Middle East.

Pakistan and Qatar have robust bilateral relations aided by the historical close ties and substantive engagement. In February 2016, the Prime Minister of Pakistan Nawaz Sharif went on the official landmark visit to Doha where he met Sheikh Tamim Bin Hamad Al Thani, the Emir of Qatar. Before this, he Emir of the State of Qatar had paid a landmark visit to Pakistan on 23-24 March 2015. In March 2017, Pakistan’s Chief of Army Staff General Qamar Javed Bajwa, went to Qatar on an official visit where he met Qatar’s Minister of Defense Affairs Doctor Khalid Bin Muhammad Al-Attiya. At this point, both the leaders vowed that the Pak-Qatar defense cooperation will have a positive impact on bilateral relations as well as on the regional security. General Bajwa also met Prime Minister of Qatar Sheikh Abdullah bin Nasser bin Khalifa al Thani, who showed his interest in learning from Pakistan Army’s experience in the security domain and sought assistance during the upcoming World Cup to be held in Qatar, including the provision of manpower.

During Nawaz’ visit to Qatar in February 2016, a number of Memorandums of Understanding (MoUs) in the field of health, radio, television, education, research and a long term sale purchase agreement (SPA) of LNG were concluded by both sides. The main focus of the Prime Minister’s visit and interaction with the Qatari leadership will be on further enhancement of bilateral relations in various fields, including energy, cooperation, trade and investment, defense and increase in employment opportunities for the Pakistani workforce in Qatar. But the highlight of the visit was the deal between both the countries on Liquefied Natural Gas (LNG) for a period of the fifteen years. Pakistan has been suffering through a severe energy crisis and the import of LNG from Qatar would be a positive step to address the issue. The deal has large prospects for the energy sector as Pakistan would be able to meet its energy requirements. 3.75 million tons of LNG would be imported annually on a government-to-government basis, at comparative rates. The price agreed for each LNG cargo discharged per month is 13.37pc of Brent value which is cheaper than the gas to be imported through pipeline projects, including the Iran-Pakistan (IP) and Turkmenistan-Afghanistan-Pakistan-India (TAPI) projects.

In the first phase, from 2016 to first quarter of 2017, the annual contract LNG quantity would be prorate of 2.25m tons, which would be increased to 3.75m tons per annum beginning second quarter of 2017. The long-term agreement would also provide for annual upward and downward flexibilities of up to three LNG cargoes against the two earlier agreed upon per contract year. The LNG deal would also provide the LNG to Pakistan on 15-day deferred payment against the earlier settlement of defer payment for 10 days. According to the agreement, the cost of imported gas is estimated to be $4.78 per mmbtu, lower than the Qatar’s current rate of $5.35 mmbtu and the cheapest in its kind in South Asia. Apart from LNG deal, PM Nawaz has called upon the Qatar Investment Authority to explore and invest in the oil, gas and power sector of Pakistan.

But why can’t Pakistan fully take Qatar’s side?

The problem for the government of Nawaz Sharif is that they have a close relation with both the governments of Qatar and Saudi Arabia. The Sharif family was given refuge by the Saudi royal family after the coup of 1999. Also more importantly, Pakistan and Saudi-Arabia diplomatic relations that are age-old bond of friendship is getting stronger with every passing year. Saudi Arabia’s long-standing and comprehensive relationship with Pakistan operates at many levels and in many areas, including trade, governance and values, health, education and culture besides politics and security. The two countries also work together extensively at the international level, within the framework of several bilateral, regional and global organizations including the Organization of Islamic Cooperation (OIC). Moreover, the Kingdom is the biggest exporter of oil and petroleum products to Pakistan, while Saudi Arabia has been a key market for Pakistani goods and services. No doubt, the two sides sought to develop extensive commercial, cultural, religious, political and strategic relations since the establishment of Pakistan in 1947. Pakistan affirms its relationship with Saudi Arabia as their most “important and bilateral partnership” in the current foreign policy of Pakistan, while working and seeking to further strengthen ties with Saudi Arabia, the country that hosts the two holy mosques in Makkah and Madinah. Another important point to consider is that Saudi Arabia has recently requested Pakistan to allow the ex-Chief of Army Staff General Raheel Sharif to lead the 39 nations’ Islamic Military Alliance to combat extremism and terrorism in the Muslim World. It is said that this arrangement will bolster the relations between the two countries (only if Military Alliance is not used against the other Muslim countries like Iran).

The government of Nawaz Sharif has a close relation with both the governments of Qatar and Saudi Arabia. The Sharif family was given refuge by the Saudi royal family after the coup of 1999. On the other hand, the Nawaz government has trade relations with Qatar. Moreover, with regards to Panama leaks, Qatar is also important due as the letter by a Qatari royal is an important part of the case for Nawaz and his family. The Qatari who sent the letter, Hammad Bin Jassim bin Jaber Al-Thani, is part of the royal family of the current emir. Therefore, the Nawaz government will try not to offend the Qataris as it could backfire in the Panama leak case.

Another quandary for Pakistan is that hundreds of thousands of Pakistanis are working in Saudi Arabia and UAE, and the about the same number of Pakistanis work in Qatar, whom remittances back to the home country are an integral part of Pakistan’s economy. Taking anyone’s side in this issue might put the employment of these people into jeopardy.

The larger picture of this division that is emerging is as such: On one side there is Egypt, Saudi Arabia, Bahrain, UAE, United States and Israel. On the other side there is Iran, China, Russia, Iraq and Syria. In such a case, to talk about balance between Iran and Saudi Arabia is illogical.
In this scenario, Pakistan cannot take the side of the anti-Iran group as Iran is Pakistan’s neighbor who has recently given churlish statements against Pakistan regarding border security issues. Pakistan, therefore, cannot afford to involve in any such matter that will fuel Iran’s anger further.

For Pakistan, CPEC is an important factor in the equation, and the deteriorating situation in the region might adversely affect the completion of CPEC. It could be a possibility that parties involved in these regional tensions start backing terror groups like Taliban and Jundullah for their own benefit. The resulting instability and tensions might put CPEC in danger and this will be detrimental to Pakistan. The effects of this situation between Riyadh and Doha on CPEC are Pakistan’s biggest source of stress right now.

Last but not the least, Pakistan cannot espouse the Saudi Arabia group against the Qatar on the basis of its alleged support of terrorism. Pakistan must know its vulnerable status today in the region and world politics, where it has repeatedly accused to sponsor and support terrorist and militant organizations that conduct suicide attacks in the neighboring countries. The Center for Strategic and International Studies (CSIS), a leading think tank in the United States, has released a report today calling Pakistan a “sanctuary for the Taliban and the Haqqani network”. In such situation, if Pakistan endorses the actions of the Saudi’s group against the Qatar’s, who knows the same allegations and diplomatic boycott, might become the fate of Pakistan in the future.

Therefor the foreign policy options for Pakistan are very limited. Pakistan has good relations with Saudi Arabia, the world’s biggest exporter of crude oil. Abu Dhabi in the UAE is also a major oil exporter. Meanwhile, Pakistan has a good LNG, low-density liquid fuel and refining product derived from natural gas deal with Qatar for the next fifteen years. So, it would be in the favor of Pakistan if Pakistan’s Foreign Office decides to remain neutral on the current Qatar-Gulf rift. The best option for Pakistan is to have a balanced stance for the time being, and wait for the dust to settle. The best response of Pakistan in this matter will be no response at all.

About the author
*Maria Amjad has graduated from Lahore University of Management Sciences (LUMS), Lahore, Pakistan, with a Political Science degree. Her interests include the history and politics of the South Asian region with a particular interest in India-Pakistan relations. The writer can be reached at mariaamjad309[at]gmail.com

Home » Why Pakistan Should Remain Neutral In Qatar-Gulf Rift – Analysis