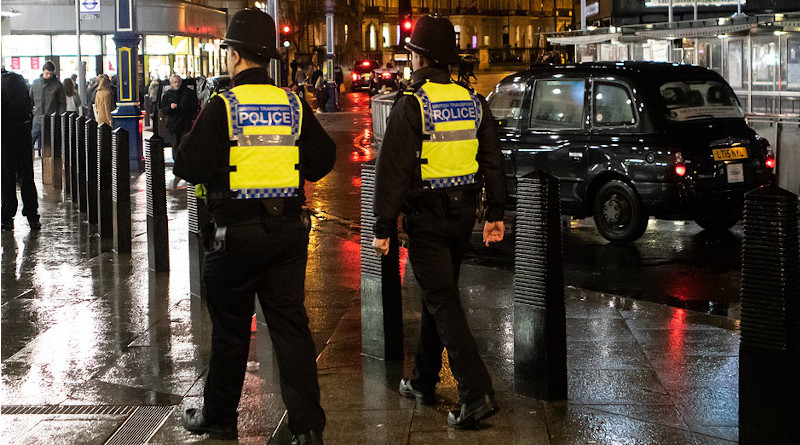 After a peaceful demonstration at the US embassy, some ‘Black Lives Matter’ protesters in London showed up at Downing Street where the scene grew more chaotic. Police clashed with the crowd in an attempt to restore order.

The gathering at London’s US embassy on Sunday drew thousands of people, and was the city’s fourth ‘Black Lives Matter’ demonstration in a week. However, once the crowd dispersed, not everyone went home. Droves of people marched on Whitehall, rattling barriers outside Prime Minister Boris Johnson’s residence on Downing Street.

A smoke bomb was lit and officers were pelted with bottles, with one Sky News reporter on the ground describing the situation as “tense.”

That tension soon boiled over, with a mob of hoodlums attacking police officers outside the Foreign Office in Whitehall.

The officers retreated, with at least one suffering a head wound in the melee. However, rows of bobbies ran in to reinforce the line, pushing back as rioters hurled traffic cones at the policemen.

As evening fell, officers, some armed with riot shields and wielding batons, continued to engage in running street battles with the rioters.

Protesters at London’s BLM rally harassed the crew of RT’s videoagency Ruptly, accusing them of working for The Sun. Ruptly’s livestream of the protest was being used by multiple news organizations at the time.

No arrest or injury figures were immediately provided by London’s Metropolitan Police. However, a demonstration in the city on Saturday followed a similar trajectory. Beginning as a peaceful gathering, the protest devolved into a fracas, with 14 police officers injured and more than a dozen people arrested.

British authorities have already urged protesters to remain at home, given the threat of coronavirus infection. PM Boris Johnson also cast the protests in a dim light on Sunday evening, declaring that they had been “subverted by thuggery,” and promising that those attacking police would be “held to account.”