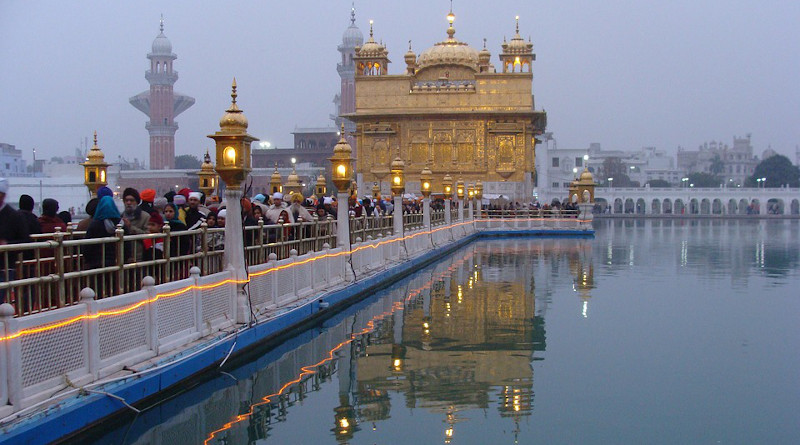 On the 36th anniversary of the storming of the Golden Temple in Amritsar, which was nothing but a genocidal move to suppress and subjugate the towering Sikhs fighting for their religious and political rights, this article is a remembrance of that tragedy. India and the world need to recall what happened within the four walls of the House of God. It is pertinent to know why a young Sikh leader Sant Jarnail Singh Bhindranwale and hundreds of others defended their holiest of holies under attack of the Indian army and achieved martyrdom. This will lead us to understand why Sikhs commemorate this year after year in the first week of June.  Human rights defenders, policy makers and politicians must understand the underlying spirit of the Sikhs and the viciousness of the Indian state in perpetrating genocide in the Punjab.

In 1919, the British massacred 389 innocent civilians and injured more than 1,000 in what is remembered by Indians as the famous Jallianwala Bagh massacre. Even after 100 years, the Indians want the British to apologize and recognize this gory incident as a genocide.

About 800 meters from Jallianwala Bagh lies the Golden Temple or Harmandir Sahib which means Abode of God.  It is the most holy shrine for the Sikhs. The Harmandir Sahib is an open house of worship for all men and women, from all walks of life and faith, a perfect example of religious harmony in a country where people kill each other in the name of religion. Over 100,000 people visit the holy shrine daily for worship.1

The Sikh religion is one of youngest religions of South Asia. In the late 18th and early 19th century, the Sikhs had their own independent state which comprised of parts of Afghanistan, Pakistan, the Indian states of Jammu and Kashmir, Himachal Pradesh, Haryana, Punjab and Rajasthan.

With the expansion of the British colonial territories, the Sikhs lost their independent state after the two Anglo-Sikh wars. In the wake of the downfall of the British Empire in the Indian subcontinent, in the eighties of the last century, the Sikh diaspora started a movement for Khalistan which means the land of the Khalsa -referring to both a community that considers Sikhism as its faith as well as a special group of initiated Sikhs.2

With the creation of India and Pakistan on religious lines, Sikhs were forced to join India and a majority of them lived in the state of Punjab. The identity of the Sikh religion as an independent faith was put to question as Article 25 of the Indian Constitution recognizes Sikhs as a part of Hindu community. 3

That apart, there were other political, social and economic discontents among the Sikhs which the Indian state failed to address. This led to the strengthening of the resolve of the Sikh leaders to assert for their right to self-determination through the Shiromani Akali Dal -a democratic political party which furthered the legitimate demands of the Sikhs. The situation was complicated when Prime Minister Indira Gandhi-led Indian National Congress tried to fan dissidence amongst the Sikh factions in order to weaken the Sikh nationalist movement.

In this struggle for securing the rights of the Sikhs, an iconic young Sikh savant -Sant (Saint) Jarnail Singh Bhindranwale emerged as the leader. He rallied to get the support of the young and old Sikhs who felt disgusted with the Indian political masters. All that the Sikhs wanted was the implementation of the Anandpur Sahib resolution of 1973, which demanded more autonomy for Punjab, where the Sikhs were in a majority.

The Indian government deliberately viewed the Anandpur Resolution as a secessionist document and propagated it as such. Sant Bhindranwale moved around the whole of Punjab convincing the masses on the legitimate demands articulated by the Anandpur Sahib resolution.

Sant Jarnail Singh Bhindranwale belonged to the historical seminary Damdami Taksal -whose religious leaders and followers were engaged in a two-decade long bitter struggle to eradicate drug abuse from the Punjab by holding Diwans -religious congregations far and wide in the countryside. These congregations were a body-blow to the Soviet attempt to annihilate love for religiosity amongst Sikhs. The tide of atheism by the leftist forces was brought to a grinding halt.  By doing this he became the most hated man of India and the most loved and revered Sant of the Sikhs. It is this success which sent shivers down the spine of the Indian political class and leadership.

Historically, the Sikh community was nurtured by the Ten Masters, who also inculcated the practice of keeping arms -the Kirpan being one of the mandatory 5 Ks for a practicing Khalsa. Sikh religious texts have it that a man of religion must be well-equipped to defend his faith, honour and dignity and if need be to die for it. Sikh history is replete with such acts of bravery where they died for their faith, facing tyranny and religious persecution of the rulers of the day. Even the Gurus went to prison and laid down their lives to uphold right to equality and right to religion of one’s choice. Very few people have been able to fathom that it is this tradition which led the Sikhs to keep traditional arms, horses and fighting gear within the precincts of the Golden Temple at the Akal Takht Sahib -the highest temporal authority of the Sikh people.

In the wake of the highhandedness of the Indian authorities, Sant Bhindranwale was only carrying on the legacy of the Sikhs. He and his followers were preparing to defend the honour of the Sikhs, the sanctity of the Golden Temple and stand up for the rights of the Sikh people.

Since 1983, Sant Bhindranwale, operated from the Golden Temple. Ostensibly to flush him out, but actually to break the backbone of the Sikhs, the government of India planned the infamous attack on the holy shrine code-named Operation Bluestar which commenced on the 1st of June 1984 and ended on 8th June 1984. The culmination was on the 6th of June 1984, the day Sant Bhindranwale was assassinated. The Indian government made elaborate planning by bringing down 70,000 of its finest troops comprising of commandos along with battle tanks, Howitzer battle guns and helicopters for assault and supply purposes. All this to fight a few hundred committed Sikhs!

Before the operation commenced, curfew was imposed in the entire state of Punjab, the entire Press was flushed out of the state, and many reporters were forcibly brought back to Delhi. Only three reporters managed to stay back and cover the unfolding of the genocide. Brahma Chellaney became the only foreign correspondent to cover this genocide for the Associated Press and his story was published in The Times of London. He wrote ‘several young Sikhs had been shot, with their hands tied behind their backs’.4 This report had quoted medical sources who conducted the post mortem.

In this blood bath, using heavy battle tanks and guns, the Indian troops destroyed large portions of the Golden Temple complex, looted, ransacked and vandalized the Sikh Reference Library. The Sikhs who were holed up inside would not meekly surrender as expected by the Indian government. They fought till their last breath and the Indian army had seen its highest casualty in an internal conflict.  India used tanks to demolish the Akal Takht Sahib where Sant Jarnail Singh Bhindranwale and his close associates bravely fought the Indian army.

What was unpardonable was the gruesome killing of hundreds of innocent Sikh children and women, who were pilgrims visiting their most sacred religious site to commemorate the martyrdom day of the Fifth Master of the Sikhs -Guru Arjan Dev. The entire complex saw bodies in the walking path and blood of innocent Sikhs flowing in the holy Sarovar -the lake surrounding the sanctum sanctorum.  Fortunately, the sanctum sanctorum of the Golden Temple, even though it was hit by bullets and bombs, survived the bombing of the Indian army. A historic handwritten copy of Guru Granth Sahib -the holy scripture of the Sikhs had bullet holes.

Thousands of devout and committed Sikh youth took up arms to fight against this injustice meted out to the innocent victims of their community. For the next decade, Punjab was destroyed by the brutality of the armed forces and the police, where every Sikh youth was branded as a militant and the entire country ostracized the Sikhs conveniently forgetting that India inaugurated this genocide in June 1984 and it continued well till the end of the 1990s till the guns were silenced along with the lives of the innocent Sikh youth.

Till date the government of India has not initiated any inquiry into this genocide. Justice beckons the innocent victims. An International Investigation and Truth-seeking Commission should be set up and adequate compensation paid to the victims who aspired for a legitimate right to self-determination.

Though India continues to seek an apology from the British for the Jallianwala Bagh massacre, will India show the same logic and apologize to the Sikh nation in letter and spirit?

The first week of June is and will always be remembered by every Sikh and human rights activist worldwide, as the beginning of the forgotten Genocide against the Sikhs.

Home » The Forgotten Genocide Of Sikhs In June 1984 – OpEd