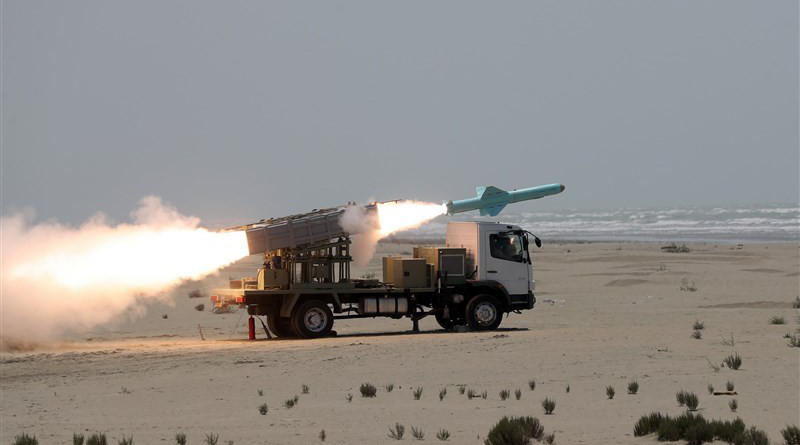 A 2015 multilateral Iran nuclear agreement (Joint Comprehensive Plan of Action, JCPOA), provides for limits on Iran’s nuclear program in exchange for sanctions relief. The accord, endorsed by U.N. Security Council Resolution 2231 (July 17, 2015), contains an annex (Annex B) that provides for a ban on the transfer of arms to or from Iran until October 18, 2020.

The Trump Administration, with the support of many in Congress, is seeking to persuade other Security Council members to extend the ban in order to prevent Iran from acquiring new conventional weaponry, particularly advanced combat aircraft. Two key potential arms suppliers of Iran—Russia and China—are veto-wielding members of the Security Council and oppose an extension. Those two countries, as well as U.S. partners in Europe, also oppose a U.S. plan to snap back all U.N. sanctions if the Council refuses to agree to the arms ban extension.

Annex B also contains a ban until October 18, 2023, on supplying equipment that Iran could use to develop nuclear- capable ballistic missiles, and it calls for Iran not to develop ballistic missiles designed to carry a nuclear weapon. These provisions are addressed in CRS Report RS20871, Iran Sanctions, by Kenneth Katzman.

Provisions of the Arms Transfer Ban

Annex B of Resolution 2231 restated and superseded the arms transfer restrictions on Iran in previous U.N. Security Council resolutions. Resolution 1747 (March 24, 2007) contained a ban on Iran’s transfer of arms from its territory and required all U.N. member states to prohibit the transfer of Iranian arms, and Resolution 1929 (June 9, 2010) banned the supply to Iran of “any battle tanks, armoured combat vehicles, large calibre artillery systems, combat aircraft, attack helicopters, warships, missiles or missile systems as defined for the purpose of the United Nations Register of Arms [ballistic or cruise missiles capable of delivering a warhead or weapon of destruction to a range of at least 16 miles] or related materiel, including spare parts….”

Annex B permits the importation and exportation of such arms by Iran if the U.N. Security Council provides advance approval on a “case-by-case basis.” Such approval is unlikely; officials in both the Obama and Trump Administrations have consistently said they could not envision U.S. approval of arms transfers to or from Iran. The arms transfer ban expires on the earlier of: (1) five years after the JCPOA Adoption Day” (Adoption Day was October 18, 2015, or (2) upon the issuing by the International Atomic Energy Agency (IAEA) of a “Broader Conclusion” that all nuclear material in Iran remains in peaceful activities.

U.S. and other Security Council member officials widely interpret the restriction as inapplicable to the sale to Iran of systems for purely defensive purposes. In 2007, Russia agreed to the sale to Iran of the S-300 air defense system, with a reported estimated value of about $800 million. Russia delivered the system in November 2016. A State Department spokesperson said in May 2016 that the sale “… is not formally a violation [of 2231]” because the S-300 is for defensive uses only.”

Effects of the Ban

The U.S. government assesses that the ban on selling arms to Iran has been effective. According to Appendix J of the congressionally mandated Defense Intelligence Agency (DIA) annual report on the military power of Iran for 2019, released in November 2019, states that Iran wants to “purchase new advanced weapon systems from foreign suppliers to modernize its armed forces, including equipment it has largely been unable to acquire for decades.”

By contrast, the ban on Iranian arms exports has arguably not been effective. According to the DIA report, which represents a consensus U.S. judgment, “Since the Islamic Revolution, Iran has transferred a wide range of weapons and military equipment to state and non-state actors, including designated terrorist organizations…. Although some Iranian shipments have been interdicted, Tehran is often able to get high-priority arms transfers to its customers. [See Figure 1].

A June 2020 report by the U.N. Secretary General on implementation of Resolution 2231 assessed that Iran attempted to export weaponry and missile parts to Houthi forces in Yemen. U.S. and allied forces intercepted the weaponry in November 2019 and February 2020. See CRS Report R44017, Iran’s Foreign and Defense Policies, by Kenneth Katzman

Relevant Laws, Authorities, and Options for the Administration and Congress

The stated Iran policy of the Trump Administration is to apply “maximum pressure” on Iran’s economy, through the imposition of U.S. sanctions, to compel Iran to alter its behavior. The Administration cited the expiration of the arms transfer ban as one among several reasons that the JCPOA was sufficiently flawed to justify a U.S. exit from the accord in May 2018. As part of the maximum pressure campaign, the Administration has insisted on keeping the arms transfer ban in place.

At a meeting of the U.N. Security Council on June 30 that discussed the arms transfer ban, Secretary of State Michael Pompeo stated: “Don’t just take it from the United States, listen to countries in the region. From Israel to the Gulf, countries in the Middle East – who are most exposed to Iran’s predations – are speaking with one voice: Extend the arms embargo.”

A May 4, 2020, House letter, signed by 387 Members, “urge[s] increased diplomatic action by the United States to renew the expiring United Nations arms embargo against Iran….”

On June 23, 2020, Secretary Pompeo posted a Twitter message that: “If the U.N. Arms Embargo on Iran expires in October, Iran will be able to buy new fighter aircraft like Russia’s SU-30 and China’s J-10. With these highly lethal aircraft, Europe and Asia could be in Iran’s crosshairs.” The composition of Iran’s forces is depicted in Figure 2

In June 2020 Administration officials said they had begun circulating a draft U.N. Security Council resolution that would extend the arms transfer ban for at least one year,

and direct U.N. member states to interdict Iranian weapons shipments suspected of containing arms exports. At the June 30 meeting of the Security Council mentioned above, Council members, including those from allied countries, rejected the U.S.-proposed extension of the arms transfer ban and instead expressed regret at the U.S. exit from the JCPOA. It is not clear if the U.S. draft resolution has enough support to receive a Council vote.

Addressing the June 30 Council meeting, Iran’s Foreign Minister Mohammad Javad Zarif stated that: “Any attempt to change or amend the agreed timetable [for the arms transfer ban expiration] is thus tantamount to undermining Resolution 2231 in its entirety.” He added that “Iran’s options…will be firm.”

The June 30 Security Council meeting did not directly address earlier U.S. official statements that the United States would trigger a provision of Security Council Resolution 2231 to “snap back” all U.N. sanctions, including the arms transfer ban, if the arms embargo is not extended. Resolution 2231 stipulates that a JCPOA participant could, after notifying the Security Council of an issue that the government “believes constitutes significant non-performance of [JCPOA] commitments,” trigger an automatic draft resolution keeping sanctions relief in effect.

A U.S. veto of this resolution would reimpose the suspended sanctions. At an April 30, 2020, briefing, the Special Representative for Iran and Senior Advisor to the Secretary, Ambassador Brian Hook, asserted that this option is available because the U.S. right “as a participant [in Resolution 2231] is something which exists independently of the JCPOA.”

European, Iranian, Russian, and other officials have opposed the U.S. assertion that it can trigger a snapback of all sanctions through Resolution 2231. On June 19, 2020, the Foreign Ministers of the United Kingdom, France, and Germany (all parties to the JCPOA) issued a joint statement: “We firmly believe that any unilateral attempt to trigger U.N. sanctions snapback would have series adverse consequences in the UNSC. We would not support such a decision which would be incompatible with our current efforts to preserve the JCPOA.”

The reaction to the U.S. threat to snap back all sanctions raises questions whether the reimposition of sanctions through that action would obtain broad international implementation of reimposed sanctions. Iran’s possible responses to a snap back are discussed in: CRS In Focus IF11583, Iran’s Nuclear Program and U.N. Sanctions Reimposition, by Paul K. Kerr.

If the United States is not able to achieve a U.S. extension of the ban, the Administration might use its sanctions laws and authorities to deter any arms sales to Iran. These include the Iran-Iraq Arms Non-Proliferation Act, the Iran, North Korea, and Syria Nonproliferation Act (INKSNA), Executive Order 13382, the Countering America’s Adversaries through Sanctions Act, and Iran’s designation as a state sponsor of terrorism provides authorities for the President to sanction arms suppliers to Iran. See: CRS Report RS20871, Iran Sanctions, by Kenneth Katzman.

*About the author: Kenneth Katzman, Specialist in Middle Eastern Affairs

Source: This article was published by CRS

One thought on “UN Ban On Iran Arms Transfers – Analysis”