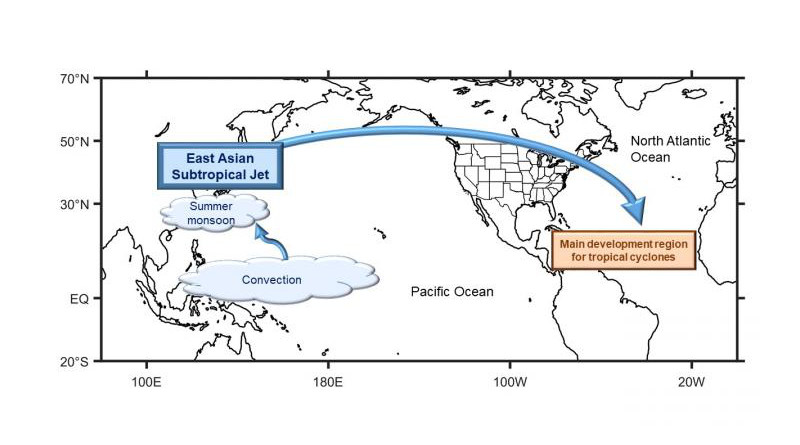 Climate researchers led by the University of Iowa have found a link between hurricanes that form in the Atlantic Ocean - and threaten the United States - and a weather system in East Asia. The scientists report a subtropical jet stream in East Asia can influence whether Atlantic tropical cyclones form. CREDIT: Gabriele Villarini, University of Iowa

With a new Atlantic hurricane season in full swing, scientists may have found a new influence on how tropical cyclones develop.

Researchers led by the University of Iowa have identified a connection between a climate system in East Asia and the frequency of tropical storms that develop in the Atlantic Ocean–which can strengthen into hurricanes that threaten the United States.

In a new study, the researchers say the East Asian Subtropical Jet Stream (EASJ) an upper-level river of wind that originates in East Asia and moves west to east across the globe, carries with it an atmospheric phenomenon called a Rossby wave.

Rossby waves occur naturally within the Earth’s oceans and atmosphere, forming because of the planet’s rotation. The researchers say Rossby waves hitch a ride on the EASJ to the North Atlantic when tropical cyclones in the Atlantic are most likely to form. The waves affect wind shear, a key element in the formation of tropical storms.

“When the EASJ is stronger, it can enhance this pattern, which leads to stronger teleconnections and stronger wind shear in the North Atlantic,” explains says Wei Zhang, a climate scientist at IIHR-Hydroscience & Engineering at Iowa. “That can suppress Atlantic tropical cyclone formation.”

The scientists observed nearly 40 years of Atlantic tropical cyclones during prime formation season, from August to November, and their connection during the same time period with EASJ activity between July to October.

“What we found was there is a signal (Rossby waves) in terms of wind shear and that this signal is coming from the west, being Asia, over the Atlantic, via the East Asian Subtropical Jet Stream,” says Zhang, who is corresponding author on the study, published online in the journal Geophysical Research Letters. “These jets act as a conduit for the signal originating in Asia, so it can propagate over the Atlantic.”

The researchers analyzed various data sets, as well as the database from the National Hurricane Center between 1980 and 2018, to seek patterns associated between tropical cyclones generated in the Atlantic and the EASJ. They determined based on that information that a stronger EASJ is associated with fewer Atlantic tropical cyclones.

The study comes as Hurricane Isiaias became the fifth named storm to make landfall in the continental U.S.–and already the second hurricane to swipe land–when it swept across the U.S. East Coast last week.

The researchers previously found a connection between the EASJ and storms affecting the western U.S. After that study, they looked for other associations.

“We said, ‘OK let’s see whether this subtropical jet can influence other weather systems,” says Gabriele Villarini, IIHR’s director and a co-author on the study.

“We found a physical mechanism that can provide a basic understanding in the context of tropical cyclone formation,” Villarini says. “Then the question becomes, ‘OK, now that you know that, what are you going to do with it?'”

He continues: “That’s the part that is not there yet, in the sense of how predictable is the East Asian Subtropical Jet, and how far ahead can we predict it for an entire season, so that it can become a useful tool for predicting tropical cyclone formation in the North Atlantic.”

The researchers also aim to understand how climate change could affect the EASJ, which may contribute to tropical cyclones’ frequency in the North Atlantic.