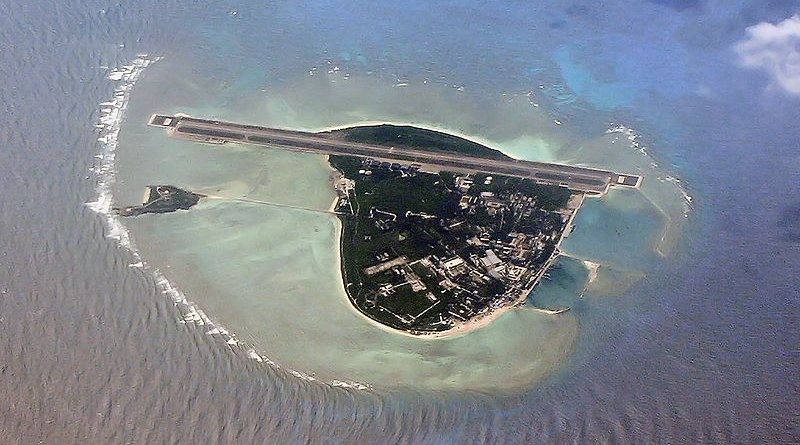 As countries in the region are busy dealing with the COVID-19 pandemic, China is stirring the pot in the South China Sea. This includes harassing other claimants’ normal economic activities, conducting large-scale drills, consolidating military bases on artificial islands, and sending research ships into other countries’ Exclusive Economic Zones (EEZs). Vietnam — as one of the claimants and perhaps the most stubborn — has become the chief target.

In early June, a Chinese Coast Guard patrol vessel rammed and looted a Vietnamese fishing boat operating in the Paracel Islands. This form of aggression is certainly not rare given Beijing’s fishing playbook. But it is important because this may be the first time China has enforced its unilateral fishing ban in the South China Sea. Beijing announced the annual ban many years ago, a ban that prompted strong protest from the Philippines and Vietnam. But China had not applied the rule to foreign vessels until this year with a new campaign called ‘Liang Jian (Flashing Sword) 2020’.

At the same time, the Chinese government survey vessel Haiyang Dizhi 4 is manoeuvring around the Vietnamese EEZ in a move believed to be aimed at pressuring Hanoi not to go ahead with its oil and gas exploration activities in the energy-rich Block 06-01 off the Vietnamese coast. Beijing has a track record of successfully coercing Hanoi to temporarily halt its strategically important projects in that area. But the timing of China’s recent maritime aggression could not be more sensitive for Vietnam.

Hanoi is preparing for the all-important Vietnamese Communist Party (VCP) National Congress next year, where the next generation of leaders are elected. Due to its inherently competitive nature of this Congress, leading candidates for the top posts must compete with each other to impress the selectorate — the VCP’s Central Committee. In a country where anti-China sentiment has run deep for centuries, showing a tough face towards Beijing can be a politically useful card to play.

During the Haiyang Shiyou 981 standoff in 2014, then prime minister Nguyen Tan Dung gained a huge boost in popularity by simply being the first Vietnamese leader in decades to publicly defy China in an ASEAN summit. This lent him immense support within the Central Committee, despite perceptions of his disastrous economic performance, and turned him into a solid candidate for the General Secretary post in the 2016 Party Congress. Although Dung was narrowly defeated by the Party Chief Nguyen Phu Trong, the 2014 incident made the VCP leadership reconsider its approach to its Northern neighbour.

While VCP General Secretary Nguyen Phu Trong was seen as a Party conservative amicable towards China, even Chinese scholars agree that Vietnam under his rule has made some strategic adjustments to challenge Beijing’s unilateral actions in the South China Sea. These include an incremental shift to the United States and the accelerating push for internationalisation of the South China Sea dispute. In a recent commentary, the Beijing mouthpiece Global Times dubbed Vietnam ‘the most significant partner of the US in Southeast Asia’. This viewpoint is noteworthy given the intimate party-to-party relationship between the Chinese and Vietnamese communist regimes.

This trend will very likely continue after next year’s congress, as some of the most prominent candidates for the top leadership positions — such as incumbent Foreign Minister Pham Binh Minh and Deputy Prime Minister Vu Duc Dam — have long been seen as open-minded reformists friendlier towards the West. The recently ratified European Union–Vietnam Free Trade Agreement and the Comprehensive and Progressive Agreement for Trans-Pacific Partnership also allow Hanoi the opportunity to cultivate an economic development path which is less dependent on China.

Beijing’s increasing provocations further limit Hanoi’s viable options for compromise as the Vietnamese public will not tolerate actions seen as kowtowing to China. Indeed, anti-China protests could be said to pose the most serious threat to Hanoi’s political stability.

In 2018, a proposed draft law for Special Economic Zones (SEZs) was met with unprecedented unrest in Vietnam, will thousands of angry citizens burning down police cars and vandalising government offices. Although the SEZ draft law did not even mention China by name, many Vietnamese believed this would allow Chinese companies to occupy Vietnamese lands for 99 years. In a surprising move for an authoritarian regime, the National Assembly backed down and overwhelmingly voted to suspend the bill indefinitely.

Given similar anti-China protests and riots in 2014, Vietnamese leaders are smart enough to know that any public compromise with China over sovereign disputes will be political suicide for both themselves and the regime. The downfall of former general secretary Le Kha Phieu in 2001 — who was heavily criticised for leaning too much towards China and allegedly gave in to Beijing’s pressure on border issues — serves as a vivid example.

China might see the ongoing global pandemic as a golden opportunity to gain the upper hand in its sovereignty disputes and advance its positions aggressively in the South China Sea, the East China Sea, the Taiwan Straits and the Himalayan border. But as shown in the case of Vietnam, this opportunistic attitude might backfire because it unintentionally bolsters anti-China sentiments. Ultimately, China’s behaviour is likely to push Vietnam further away from Beijing’s orbit.

*About the author: Nguyen Khac Giang is a senior research fellow at the Vietnam Institute for Economic and Policy Research, Vietnam National University, and a PhD candidate at Victoria University of Wellington.