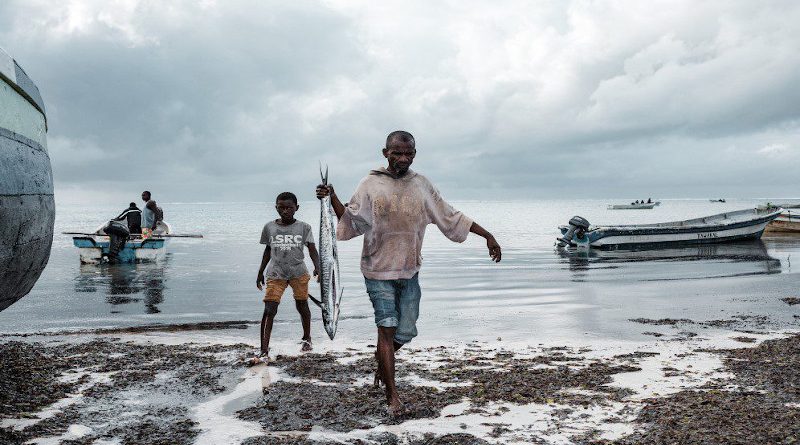 Fishermen carry fish from the boat. Copyright: Image by Antony Trivet from Pixabay

Scientists have projected that millions of people in 65 nations globally, including those in Africa and South-East Asia and the Pacific, could face increased malnutrition as climate change and overfishing take their toll on fisheries.

According to a study that analysed over 800 fish species from more than 157 countries, climate change and overfishing could lead to acute shortages of vital micronutrients from the oceans.

Countries whose fisheries are at increased risk include those in Sub-Saharan Africa such as Mozambique and Sierra Leone, and East Asian and Pacific countries including Cambodia, Indonesia, Malaysia and Timor-Leste, according to the study published last week (20 July) in Current Biology.

Maire says that the study found a clear impact from climate change on the overall availability of micronutrients for 65 nations, and consequently threatening the food security of millions of people living in these countries could be threatened.

She explains that fish is a good source of protein and many vitamins, minerals, and fatty acids that are often missing in the diets of coastal populations throughout the world.

“Making fish more accessible locally could have a huge impact on global food security and combat malnutrition-related diseases in millions of people globally,” she adds.

Researchers analysed the combined influence of climate change and overfishing on micronutrient availability using fish catch data from 157 countries for the years 2010 to 2014.

“Our analysis highlights the need to consolidate fisheries, climate, and food policies to secure the sustainable contribution of fish-derived micronutrients to food and nutrition security,” the study says.

Maire tells SciDev.Net that an earlier study found that climate change could lead to large-scale redistribution of global fish catches with a drop of up to 40 per cent.

“We need to find a way to put human nutrition at the core of fisheries policies. Food security policymakersshouldacknowledgethat fish is nutrient-rich foodand work onwhat can be done to increase access to fish bymalnourished people. Effective climate [change] mitigation is a high priority,”she says.

Edward Kimani, chief research scientist, fisheries and aquatic ecology at the Kenya Marine and Fisheries Research Institute, says that economic impacts of reduced fishery production include reduced employment and household incomes as well as other fisheries support activities, and reduced trade and exports.

“Fish production is dependent on the aquatic environment and climate change directly impairs productivity,” he explains, adding that the study’s findings could inform policymakers of the impacts of overfishing and climate change on one key source of food and nutrition in Africa.

“It is an early warning towards preparing mitigation by reducing the impacts as well as developing alternative sources of food and economic activities to cover the loss due to overfishing and climate change,” he says.

Strategies for mitigating overfishing, according to Kimani, include the development of other economic activities such as coastal and marine tourism to reduce the number of people who directly depend on fishing, and the development of fish farming to reduce dependence on harvesting of fish in their natural habitat.

This piece was produced by SciDev.Net’s Sub-Saharan Africa English desk.