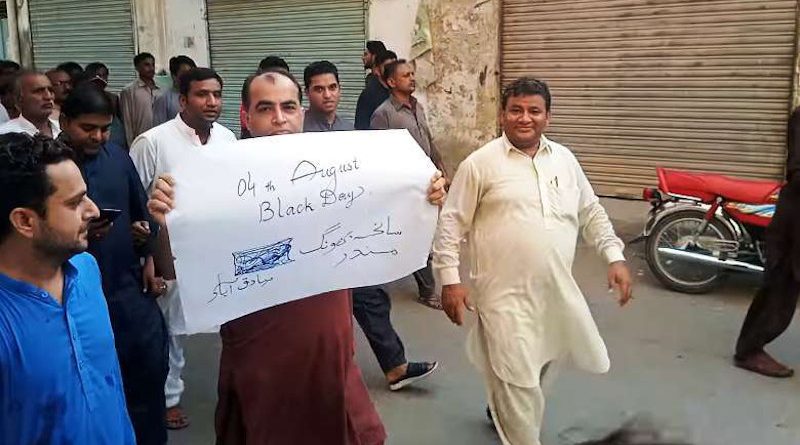 Hindus protest against the attack on Siddhi Vinayak temple in Bhong city in Pakistan's Punjab province on Aug. 5. (Photo supplied)

(UCA News) — Chand Kumar was on the rooftop when a Muslim mob raided the Siddhi Vinayak temple in front of his house in Bhong city in Pakistan’s Punjab province on Aug. 4.

“The police entered the temple compound first and even fired aerial shots, but they were just too many. Some of them began banging the doors of Hindu houses. We were scared. I locked my family in a room,” Kumar told UCA News.

Terrorized by the incident, most of the 800 Hindu residents living in the vicinity of the temple have fled Bhong.

“Come, police, come, I prayed as I watched the temple doors burn. But the constables kept hiding inside a side room. The looting and vandalism continued for three hours,” Kumar said.

He alleged the attackers were from the Kacha (Indus delta) region, which is infested with gangs of dacoits (armed robbers), adding that he suspected some locals may have called them.

Tents have been erected around the burnt temple building. Its floors were strewn with broken idols and pieces of glass. Electricity was restored and new ceiling fans were installed after the government stepped in to restore the temple built in 2018.

Both Prime Minister Imran Khan and Chief Justice of Pakistan Gulzar Ahmed took notice of the attack. The PM said in a tweet that he had directed authorities in Punjab to ensure the arrest of all culprits and take action if there was any police negligence.

The Siddhi Vinayak temple became the eighth temple to be desecrated and vandalized across Pakistan’s three provinces since 2020. The latest attack sparked condemnation from Hindu-majority areas like Daharki city in Sindh province.

“4th August, Black Day” and “We want justice” read the banners displayed by Hindus during a civil society-organized protest rally in Ghotki district.

The situation had been tense in Bhong Sharif since last month after an allegation of desecration of a madrasa. A local cleric had filed a blasphemy case accusing a nine-year-old Hindu boy of urinating on the carpet inside the library of the Muslim seminary.

Some locals used social media to incite the Muslim community. One of them, Abdul Razzaq Soomro, was arrested by police but was released due to public pressure. The Hindu boy was also released on bail by a local court.

The Human Rights Commission of Pakistan (HRCP) said in a tweet that the temple attack in Bhong occurred in response to bail being granted to the Hindu boy.

“The government must take immediate measures to charge the perpetrators and protect all religious minorities and their places of worship. HRCP once again demands that the 2014 Tasadduq Jilani judgment of the Supreme Court be implemented immediately,” the commission said.

The landmark judgment mandated the federal government to create a national council for the rights of minorities and provincial governments to create task forces for promoting religious tolerance, protecting places of worship and cracking down on hate speech, among other measures.

The National Commission for Justice and Peace (NCJP), a human rights body of the Catholic Church in Pakistan, joined the commission in condemning the attack.

“We demand that the government should take concrete measures to provide security to religious minorities and their worship places. The perpetrators should be brought to justice,” said Bishop Samson Shukardin of Hyderabad, who is chairperson of the NCJP.

In a joint statement issued on Aug. 5, Father Emmanuel Yousaf Mani, national director of the NCJP, said religious minorities in Pakistan want their places of worship to be protected.

Father Mani said the attacks on minorities were a serious threat to their survival in Pakistan. He demanded that a national action plan be devised to safeguard minorities.