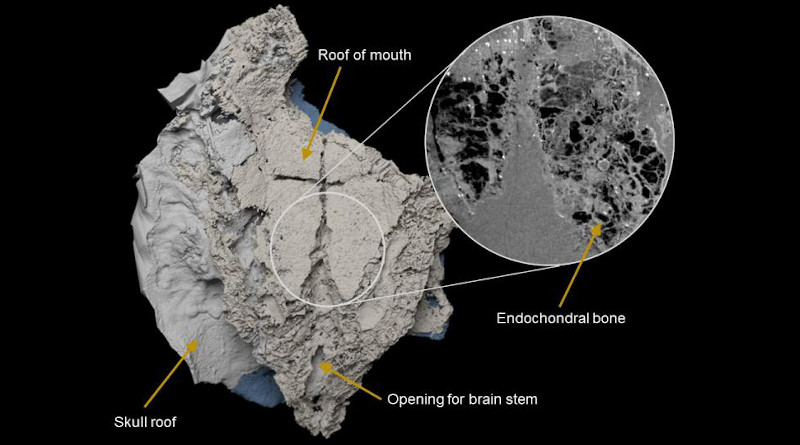 Sharks’ non-bony skeletons were thought to be the template before bony internal skeletons evolved, but a new fossil discovery suggests otherwise.

The discovery of a 410-million-year-old fish fossil with a bony skull suggests the lighter skeletons of sharks may have evolved from bony ancestors, rather than the other way around.

Now, an international team led by Imperial College London, the Natural History Museum and researchers in Mongolia have discovered a fish fossil with a bony skull that is an ancient cousin of both sharks and animals with bony skeletons. This could suggest the ancestors of sharks first evolved bone and then lost it again, rather than keeping their initial cartilaginous state for more than 400 million years.

The team published their findings in Nature Ecology & Evolution.

Lead researcher Dr Martin Brazeau, from the Department of Life Sciences at Imperial, said: “It was a very unexpected discovery. Conventional wisdom says that a bony inner skeleton was a unique innovation of the lineage that split from the ancestor of sharks more than 400 million years ago, but here is clear evidence of bony inner skeleton in a cousin of both sharks and, ultimately, us.”

Most of the early fossils of fish have been uncovered in Europe, Australia and the USA, but in recent years new finds have been made in China and South America. The team decided to dig in Mongolia, where there are rocks of the right age that have not been searched before.

They uncovered the partial skull, including the brain case, of a 410-million-year-old fish. It is a new species, which they named Minjinia turgenensis, and belongs to a broad group of fish called ‘placoderms’, out of which sharks and all other ‘jawed vertebrates’ – animals with backbones and mobile jaws – evolved.

When we are developing as foetuses, humans and bony vertebrates have skeletons made of cartilage, like sharks, but a key stage in our development is when this is replaced by ‘endochondral’ bone – the hard bone that makes up our skeleton after birth.

Previously, no placoderm had been found with endochondral bone, but the skull fragments of M. turgenensis were “wall-to-wall endochondral”. While the team are cautious not to over-interpret from a single sample, they do have plenty of other material collected from Mongolia to sort through and perhaps find similar early bony fish.

And if further evidence supports an early evolution of endochondral bone, it could point to a more interesting history for the evolution of sharks.

Dr Brazeau said: “If sharks had bony skeletons and lost it, it could be an evolutionary adaptation. Sharks don’t have swim bladders, which evolved later in bony fish, but a lighter skeleton would have helped them be more mobile in the water and swim at different depths.

“This may be what helped sharks to be one of the first global fish species, spreading out into oceans around the world 400 million years ago.”