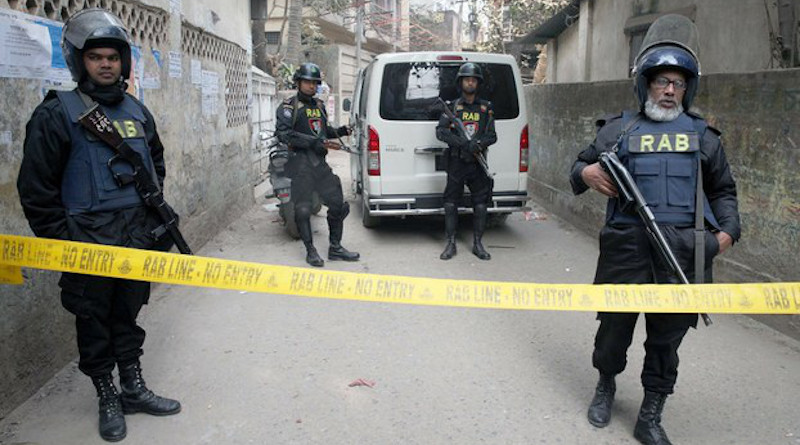 On August 27, 2020, the Counter Terrorism and Transnational Crime (CTTC) unit of Dhaka Metropolitan Police (DMP) arrested a ‘fundraiser’ of Neo-Jama’atul Mujahideen Bangladesh (Neo-JMB) from the Sabujbagh area of Dhaka city. The arrestee was identified as Sibbir Ahmed (22). A cell phone, five Jihadi books and a bank deposit receipt book were recovered from the arrestee’s possession. CTTC officials disclosed that Sibbir was trying to increase the strength of Neo-JMB and carry out subversive activities after collecting funds from different foreign nationals. For this purpose, he contacted members of Islamic State (IS)-inspired militant outfits in the Philippines, Indonesia, United Kingdom, France, and Afghanistan, using different online platforms. He also had records of financial transactions with some foreign nationals returning from Syria.

On August 24, 2020, the CTTC unit arrested a cadre of Neo-JMB from the Babubazar Bridge area in Dhaka city. The arrestee was identified as Mohamad Salek aka Abu Salek (19).

On August 11, 2020, five cadres of Neo-JMB were arrested by the CTTC unit of the Police in Sylhet District. The Police claimed that they were planning to carry out attacks on major sites in Sylhet, including the shrine of Hazrat Shahjalal.

According to partial data collected by the South Asia Terrorism Portal (SATP), a total of 21 Neo-JMB terrorists have been arrested from across Bangladesh since the beginning of the current year (data till September 6, 2020). During the corresponding period of 2019, 10 Neo-JMB terrorists were arrested. Another six Neo-JMB cadres were arrested during the remaining period of 2019.

Neo-JMB is believed to have emerged in 2014. The outfit, however, came into prominence only after it took responsibility for the July 1, 2016, Gulshan (Holey Artisan bakery) attack  in which 20 hostages, including 17 foreigners, were slaughtered. However, the incident also proved disastrous for the outfit.

Since the bakery attack, the group has failed to execute any major fatal attack.

Talking about Neo-JMB, the CTTC unit Chief Monirul Islam, in an interview on August 21, 2020, observed,

In 2016, their organizational capacity was in its final stage. However, many organizers, masterminds and trainers have been killed or arrested in various operations since the Holy Artisan attack. They are a bit weak. Later in 2017, they also tried to rebuild under the leadership of Mainul Islam Musa. But he was killed in the operation in Moulvibazar. In addition, we have been able to break down the capacity that was developed by conducting operations in different places. Because of that, the Neo-JMB could no longer stand up organizationally. That is why such an incident could not happen in 2018. But in 2019, the Neo-JMB again tried to detonate bombs in five places in Dhaka and two places in Khulna. They have all been identified and arrested. This year too, they carried out an attack in Chittagong and tried to do the same in Dhaka and Sylhet. They have also been arrested. As a result, they do not have that organizational structure. Though they try to attack, by using a sleeper cell, in isolation at different times, they do not have the capacity to do damage anymore.”

In comparison to JMB, Neo-JMB which emerged  in 2014, was far more radicalized. Neo-JMB claims affiliation to Daesh (Islamic State, IS). The JMB mostly used bombs and grenades to carry out attacks. In a prominent attack, the old JMB carried out synchronized blasts  across the country on August 17, 2005, killing three and injuring more than 100 people. Investigations in the July 1, 2016, bakery attack has revealed that the terrorists used “AK 22 rifles”, a low calibre weapon. CTTC chief Monirul Islam said, “A seal from a factory in Bihar was found on the three AK 22 rifles recovered after the Gulshan terror attack. We have come to know that the modification of these arms was done in Munger city in Bihar state of India and then they came to Chapainwabganj border.”

Though Neo-JMB has lost almost all its leaders after the bakery attack and continues to face losses in terms of regular arrests, it continues to remain a security threat.

According to reports, its cadres now act like a “wolf pack” and they choose their leader by themselves. They carry out their activities as sleeper cells. Usually, they form small ‘self-radicalized’ groups, and plan to carry out attacks as part of the so-called global jihad. The CTTC unit of the Police came to know about the new approach of the outfit after arresting five Neo-JMB cadres from Sylhet District on August 11, 2020.  The outfit believes that if any of its operatives are apprehended carrying out such attacks, law enforcement agencies will not be able to nab other members of the organization.

Militants are now using the ‘lone wolf’ system all over the world. The trend of lone wolf attacks has gone up compared to that of coordinated attacks, and it is almost impossible to stop this trend. Militant activities are under control, but it is not possible to completely eradicate militancy without raising awareness. Awareness was raised among the people after the Holey Artisan Bakery attack. It will be possible to resist the tendency of ‘lone wolf’ attacks if people provide information about militants or suspicious activities.

Neo-JMB now mainly consists of tech-savvy youngsters and Bangladesh’s security forces are finding it difficult to detect their motives and future. For instance, on October 12, 2019, a team of CTTC arrested two cadres of Neo-JMB from Mohammadpur area of Dhaka city. Both the arrestees – Mohamad Mehedi Hasan Tamim and Mohamad Abdullah Ajmir – had graduated from the Mechanical Engineering department of Khulna University of Engineering and Technology. On January 20, 2020, CTTC unit of Dhaka Metropolitan Police arrested Mohamad Jamal Uddin Rafique (26), an engineer, and his associate Mohamad Anowar Hossain, from Jatrabari area of Dhaka city.

Despite the ongoing counter-terrorism efforts in Bangladesh, recent arrests of Neo-JMB cadres and their revelations indicate that the group remains a key threat to Bangladesh’s internal security. While the overall capability of the group has dwindled, the residual capacity cannot be ignored.