The post cold war India-U.S. relations are at the threshold of unprecedented developments. A remarkable change in the relationship between the two countries after the end of cold war era can be perceived in the nature, content and the scope of the evolving relationship. Thanks to the changing international strategic environment and the bilateral efforts on the part of the two countries that makes it possible for the relations to prosper better than ever before in the past. Both countries share multi-faceted relationship spanning political, economic and energy, defence, strategic and security realms. The principal driver of this relationship is the growing convergence of economic and strategic interests and the existence of a large and successful Indian Diaspora in the U.S.

The relationship between the two democracies has the potential to not only serve the bilateral interests, but also contribute to global peace and security. The relationship between the two countries is one of the most important bilateral relations in the world. Both sides understand and accept the shared responsibility for a cooperative approach towards dealing with the 21st century challenges. Both have an overarching shared interest in promoting global stability and security. However, the growing strategic partnership is not without its limitations which have the potential to derail the prospects of significant improvement.

In the American parlance, the term strategic partnership implies little more than mutual respect and long-term cooperation in selected areas of mutual concern, and is not synonymous with the identity of views.i While in Indian parlance, the term refers to a situation wherein the two countries agree to raise the level of their regular interaction from the lowest to the highest, to deal with the great variety of issues that concern each of them in a cordial manner seeking cooperation and understanding and to make a long-term commitment for the mutual benefit and furthering their respective goals.ii From the above Indian and American perspective, one can conclude that strategic partnership is meant for mutual benefit that would work together to meeting the common concerns for the long-term partnership and does not lead to alliance against any third country. Both sides will enjoy distinctive flexibility to chase respective interests and not come under the pressure of the partner.

Defence cooperation between India and the U.S. has increased exponentially in the last few years and is testimony to the common interests and growing trust between the two partners. Convergent security perceptions and the lack of political understanding are the main reasons behind the meaningful defence and security cooperation. Defence and Security cooperation has expanded its scope to include joint military-to-military exercises involving all the branches of the armed forces, armed forces training, supply of arms and equipment, high-level visits, unit/ship visits, subject matter expert exchanges, etc.

The transforming defence and security cooperation is to achieve inter-operability. It is aimed at developing capabilities and confidence, jointly confront multilateral security issues such as protection of the sea lanes of communication, ensure free and uninterrupted passage of energy supplies and conduct joint peacekeeping operations, combating terrorism and preventing the proliferation of weapons of mass destruction (WMDs).

Defence and security cooperation is evolving in response to changing role of India as a regional and major power that has a significant role to play in the twenty-first century. America today perceives India as a growing world power with which we share common interests. For the U.S to achieve its global and regional interests, require a stable and a reliable partner, India can be one of them. This should remain the foundation for a stronger defence and security cooperation

However, the September 11 incidents and India’s unconditional support to the U.S. in the fight against terrorism was also a turning point in India-U.S. defence and security cooperation. United States had lifted sanctions that were imposed after the Pokhran II tests, resulting in an increase of joint military exercises and dual use exports to India. That Over the last ten years, Indian and American forces have participated in over sixty joint exercises and military-to-military training programmes.

The stronger the military-to-military ties between the India and the United States, the better will be for both the countries to better understand each other’s systems and doctrines. And the more the exercises between the armed forces of the two countries, the greater will be the rationale for providing India with advanced technologies of the twenty-first century. There has been a regular Malabar exercises between the navies of the two countries since 2002. The Malabar 2005 exercise was the largest naval exercise India had with any other country. It was for the first time that India had introduced its aircraft carrier INS Viraat, while the U.S. introduced its aircraft carrier Nimitz. This exercise is aimed at maintaining good order at sea and the security the sea lanes of communications. The joint military exercises will benefit both sides in the following way:

Another area that has made some improvement is in the field of defence and equipment supply. Since 2002, there has been a regular arms supply from the United States. The major defence deals signed so far and under consideration are given below. 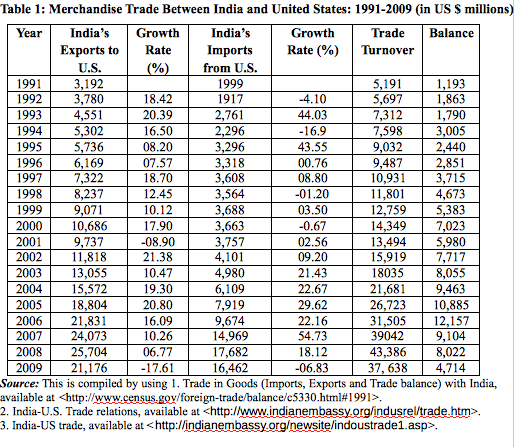 Economic and trade relations is the engine of the evolving strategic partnership between the two countries. Economic relations provided the much-needed sound foundation for enlarging the strategic relations. The economic complementarities between India and the United States in the areas of trade and investment have been the bonding factor bringing the two countries closer. India and the United States are the two largest democracies in the world, representing a fifth of the world population and account for more than a quarter of the world’s economy has a lot to contribute in bringing economic stability in Asia and the world at large. The Indian need for capital and the American need for market can be fulfilled by working closely together. By working closely together, both sides can facilitate each other continued economic success.

There has been significant improvement in trade in goods and trade in services. Also, investment flows in both directions. The U.S. investment is creating significant jobs in India and vice versa. The two-way merchandise trade between India and United States had witnessed a significant leap from paltry $5.6 billion in 1990 to $43.38 billion in 2008, representing an impressive 675 per-cent growth in a span of 18 years (See Table 1).

The evolving strategic partnership between India and the United States has its limitations. Those are lack of understanding between India and the United States over Pakistan and India’s obsession with Strategic autonomy. The article argues that had there been no such issues the relationship between the two countries would have been totally different. These two factors have not allowed the relationship to move freely in a way it should be.

U.S. commitment to help India become a major power in the world has remained only in paper due to the fear of losing Pakistan and its response. The U.S. has equipped Pakistan with sophisticated weapons such as F-16 aircraft, lethal missile arrangements and naval surveillance reconnaissance aircraft, etc. While the American policy of maintaining regional balance between the two south Asian rivals did not allow for the transfer of advanced technology, arms and equipment to India. This is very well reflected in what U.S. Under Secretary of Defence Walter Slocombe has said on June 1995 that “any deepened security relationship between U.S. and India would not affect the traditional close cooperation between U.S. and Pakistan.”

Indian Air Marshal K. D. Chadha, former Chief of Air force has said “Pakistan’s affiliation with the United States aroused “ambitions and delusions of grandeur” in Pakistan’s power elite. Military officers exposed to American training and doctrines “began to see themselves as invincible superior beings. They held the Indian military forces… in derisive contempt. Arrogant, flamboyant and impregnated with American doctrinal proclivities, they were more than convinced that militarily India was a push-over.”v The U.S. obsession with Pakistan helped Islamabad to deal with India. Pakistan wants to have closer defence and security ties with the U.S. to pressurizing India into concession on Kashmir issue and finding a strategic depth in Afghanistan.

India’s obsession with strategic autonomy is another limitation to the evolving strategic partnership between the two countries. The one area that has been significantly impacted by such New Delhi’s stand is on Defence and security cooperation. “India’s historic leadership of the non-alignment movement and desire to maintain strategic autonomy somewhat constrain cooperation at a level USPACOM (US Pacific Command) desires,” the US Pacific Command Commander, Admiral Robert Willard, said in his testimony before House Armed Services Committee.vi

For fear of loosing its strategic autonomy, India have so far not agreed to signing defence cooperation agreements with U.S. over Basic Exchange and Cooperation Agreement for geo-spatial cooperation (BECA), Logistics Support Agreement (LSA), Communication Interoperability and Security Memorandum of Agreement (CISMOA) and End User Monitoring Agreement (EUMA), Proliferation Security Initiative (PSI) and the Container Security Initiative (CSI). The BECA calls for the exchange of geospatial information between two governments, mutual technical assistance and cooperative production programmes. The CISMOA lays down protocols for interoperability and assures the security of communication between the armed forces of the two countries. The LSA allows the armed forces of the two countries to procure fuel and supplies from each other’s facilities. The PSI aims at preventing proliferation of nuclear material through interdiction of ships in international waters. India has refused to sign the PSI despite being one of the first countries to stop, board and confiscate the cargo of missile components” from a North Korean ship en route to Pakistan during the 1990s.vii However, national security advisor, Shivshankar Menon is of the view that, “A country that doesn’t develop and produce its own major weapon platforms has a major strategic weakness, and cannot claim true strategic autonomy. This is a real challenge for us all.”viii Menon is very right because we are in the process of improving the defence production capabilities.

Given the level of understanding that both sides have gained so far, the relationship will continue to grow steadily in the coming years and become one of the most important existing partnerships in the 21st century. The strength of this partnership lies in the convergence of interests that both sides share and their ability to overcome any differences that comes their way. The relationship between India and the United States in the coming years will continue to be guided by their common interests, mutual needs and shared threats.

Dr. Mohammad Samir Hussain is a Research Associate in the Yashwantrao Chavan National Centre of International Security and Defence Analysis, University of Pune, Pune. He can be reached at [email protected]