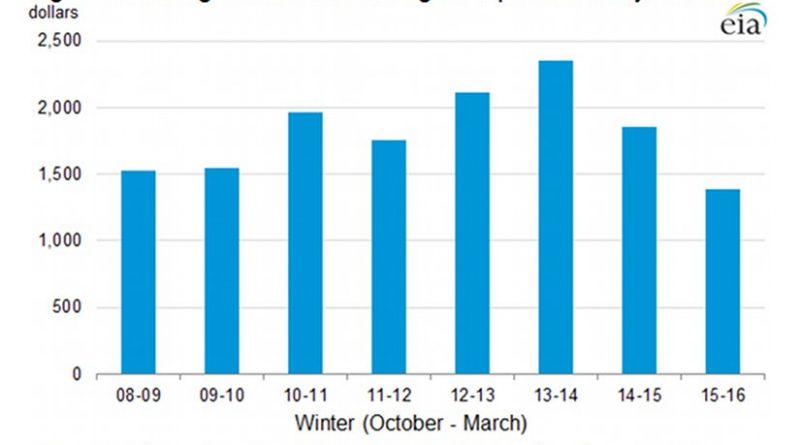 A forecast combination of warmer weather and lower crude oil prices is contributing to the lowest expected average residential heating oil expenditures in nine years for the winter heating season of 2015-16, which runs from October 1 through March 31.

The average household using heating oil is forecast to spend about $1,390 for heating bills during winter 2015-16, down $460 from last winter’s average expenditures (Figure 1, above). Forecast average expenditures provide a broad guide to changes compared with previous winter heating seasons, but fuel expenditures for each household are highly dependent on the size and efficiency of individual homes and their heating equipment, thermostat settings, and local weather conditions.

Heating oil is a winter fuel mainly used in the northeastern United States, where 23% of that region’s households use it as a primary space-heating fuel. Nationally, it is less widely used, with only 5% of households using it as their primary source of heat.

Prices for residential heating oil are forecast to average $2.57/gallon (gal) this winter, which would be 47 cents/gal (15%) less than last winter. The main driver of lower retail heating oil prices is lower crude oil prices. The spot price of North Sea Brent crude oil is forecast to average $52/barrel (b) this winter, down $13/b (32 cents/gal) from last winter. In the forecast, Brent prices remain at levels below recent years, as the global oil market continues to experience large inventory builds because of more supply than demand.

Consumption of heating oil is largely dependent on winter temperatures, which are forecast by the National Oceanic and Atmospheric Administration (NOAA) to be relatively mild this winter. Consequently, heating oil use is forecast to be 11% lower than last winter.

Also, distillate fuel inventories, both globally and in the Northeast, are ample heading into the winter. Slowing economic growth in emerging economies, which has been the major driver of distillate consumption in recent years, has reduced growth in global demand for distillate fuel. Additionally, relatively strong gasoline refining margins during the past summer encouraged record-high global refinery runs.

This combination of high refinery runs and slowing demand growth has resulted in high inventory levels in major distillate markets including Asia, northwest Europe, and the northeast United States. Distillate stocks in the Northeast totaled 45.1 million barrels on September 25, the highest for any week since late 2011. Higher levels of distillate supply compared with demand contribute to expected heating oil crack spreads averaging 38 cents/gal this winter, down from an average of 43 cents/gal over the previous three winters.

One of the main factors driving heating fuel expenditures this winter will be the price of crude oil. As the main cost for producing refined products, changes in crude oil costs can have a large effect on retail prices for heating oil. EIA forecasts that West Texas Intermediate crude oil prices in January will average $48/b.

However, the current values of futures and options contracts continue to suggest high uncertainty in the price outlook. WTI futures contracts for January 2016 delivery, traded during the five-day period ending October 1, averaged $46/b, while implied volatility averaged 43%. These levels established the lower and upper limits of the 95% confidence interval for the market’s expectations of monthly average WTI prices in January 2016 at $32/b and $67/b, respectively. While there is not sufficient liquidity in the Brent options market to do a similar calculation for Brent crude, based on EIA’s Brent-WTI forecast price differential, one could assume that the upper and lower limits of the confidence band for Brent would be roughly $5/b above those for WTI. Several factors could push prices lower or higher than forecast, including the pace of global economic growth, the responsiveness of non-OPEC oil production to the low price environment, and any unplanned production outages.

Beginning this week and continuing through the end of March 2016, prices for wholesale and residential heating oil and propane will be included in This Week in Petroleum, and on EIA’s Heating Oil and Propane Update web page.