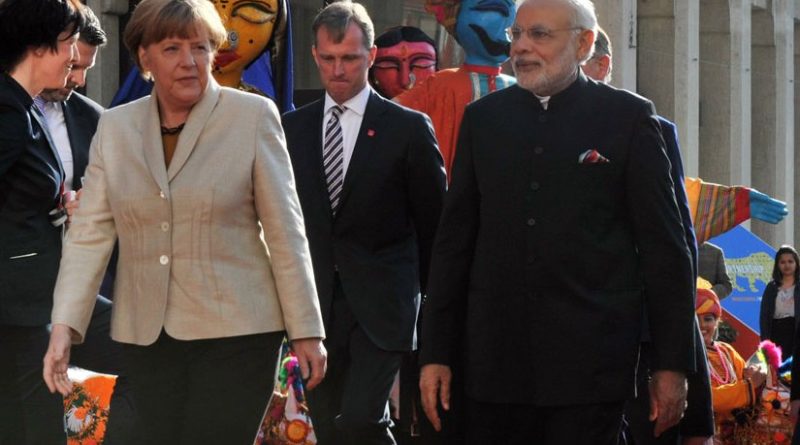 It was a conspiracy all right – but it occurred a century ago and was only in name “Hindu”. It was a bit hard for the Americans then to see the difference between “Hindu” and “Indian”. There was no confusion, however, about the German plot to smuggle arms from the United States to the subcontinent during World War I to foment a revolt against the Raj.

Neither Prime Minister Narendra Modi nor Chancellor Angela Merkel may have heard of the “Hindu-German conspiracy”. But their attempt this week to put some meat on the bones of a proclaimed Indo-German strategic partnership is part of a story that goes back to the early years of the 20th century, when radical sections of the Indian national movement made common cause with a rising Germany.

The “Hindu-German conspiracy” involved India’s revolutionary exiles in the US and Europe. Turkish officials and Irish Republicans lent some extra colour to the effort. Moving arms from America to the subcontinent was only one part of the German ambition to turn Britain’s greatest advantage – the possession of India – into a liability.

Germany looked for allies among the Bengal revolutionaries, the Ghadar Party in Punjab, the Deobandis, Hindu princes and Muslim nawabs. The German effort peaked with the establishment of a provisional government of India in Kabul exactly a century ago this year in December 1915. The president was Raja Mahendra Pratap Singh from Aligarh. Maulana Barkatullah was the prime minister, Obaidullah Sindhi and Champakraman Pillai held the home and foreign portfolios respectively.

The plan was to bring 20,000 Turkish and German soldiers to Afghanistan and assist Kabul in launching a war against the Raj. The attack on the North West Frontier would be reinforced by a mutiny in the Indian army and a popular upsurge against British rule. Although the scheme was naïve, the first substantive collaboration between Indian nationalists and Germany was not without important consequences. The German effort did help Afghanistan regain its full independence from the Raj, accelerated the emergence of Indian nationalism in the inter-war period, and helped its leaders appreciate the international dimensions of India’s freedom struggle.

The Federal Republic of Germany based in Bonn was a semi-sovereign protectorate of America and was seeking integration into European structures. Newly sovereign India was zealous in guarding its non-aligned foreign policy.

Since the reunification of Germany 25 years ago this month, the picture has changed radically. The “Berlin republic” is fully sovereign and a force to reckon with in Europe and beyond.

Under Merkel, only the second chancellor of the Berlin republic, German foreign policy has begun to acquire a set of new characteristics. It is no longer reflexively deferential to the US on all international issues. Although paralysed by occasional self-doubt, Germany has also begun to exercise leadership in Europe. Even more important, Germany is “looking east”. Berlin is less judgemental than its Western partners of Russia’s internal politics, unwilling to renew the Cold War at the centre of Europe and eager to consolidate its position as the privileged economic partner of Moscow.

If geography shapes Germany’s attitudes to Russia, the commercial logic has driven Berlin to embrace Beijing. Some in the Anglo-Saxon world worry Merkel’s Ostpolitik will end up appeasing authoritarian Russia and communist China. Such alarmism apart, Germany is firmly rooted in the West. But it has begun to grow out of the transatlantic straitjacket and European encirclement, and seeks its place in a world of multiple powers.

Germany’s engagement with India is indeed very much part of that strategy – and this was reflected in the declaration of a strategic partnership way back in 2001. Despite the establishment of many mechanisms for security and political cooperation, progress has been incremental, if at all. Merkel is betting that Modi can reverse the drift in New Delhi and make India an attractive strategic partner for Germany.

The multiple agreements on economic cooperation unveiled by Modi and Merkel suggest that a new commercial momentum is at hand. The challenge is really at the political level, where India’s imagination of a changing Europe’s strategic possibilities has been insufficient and its capacity to seize the emerging opportunities, inadequate. At least until now.

If Merkel’s Berlin republic is discarding its many postwar political inhibitions and reconstituting the Eurasian landscape, Modi’s putative “third republic” is looking beyond non-alignment to the idea of India as a “leading power”. In their second summit in six months, Modi and Merkel may have decisively nudged India and Germany towards a goal that was first articulated 100 years ago.

*The writer is a Distinguished Fellow at Observer Research Foundation, Delhi and Consulting Editor on foreign affairs for ‘The Indian Express’

Home » What Is The ‘Hindu-German Conspiracy’? – Analysis