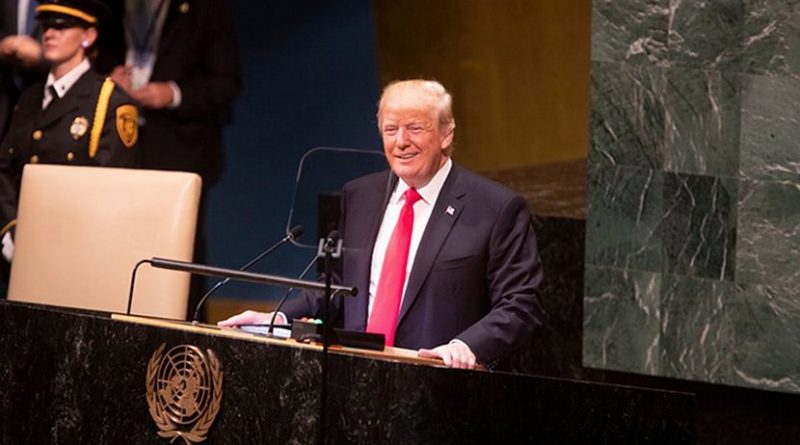 In his speech during the 73rd Session of the United Nations General Assembly, US President Donald Trump, while reiterating his ‘America First’ and ‘Making America Great Again’ policy, claimed that it meant standing up for America, the American people and also for the world.

He clearly said America respects the sovereign independence of other nations and wants the same in return. A reciprocally fair trade and commitment not to surrender ‘America’s sovereignty to an unelected, unaccountable, global bureaucracy.

Mr. Trump made an outright rejection of the ideology of globalism with his assertion that America is to be governed by the Americans themselves following the doctrine of patriotism. However, in his speech, he admitted American responsibility for the peace and prosperity of people anywhere in the world with the commitment to the defense of America’s allies, nevertheless, he did not shy away from avowing that they too have to pay ‘their fair share for the cost of their defense’. His message was clear as he said ‘peace without fear, hope without despair, and security without apology’ will be the governing principle of his foreign policy.

However, it is not Mr. Trump that has initiated tensions in America’s relations with Europe.

America’s friendship with Europe has been horribly damaged since the early years of US President Barrack Obama. Indeed, Mr. Obama had initiated a crisis in Trans-Atlantic Relations while ignoring Europe in his major foreign policy formulations.

Sir Winston Churchill the wartime Prime Minister of Britain is considered one of the most revered foreign leaders in America, for his great leadership role that ensured the victory of allied powers during World War II. But immediately after Mr. Obama entered White House he removed the bust of Churchill from the Oval Office and replaced that with one of Martin Luther King. It was an example of America’s shifting priorities in its relations with its most important allies in Europe.

His successor Donald Trump is charged to have a plan to end Europe and is doing much damage to the deepest and most broadly agreed foreign-policy interests of the United States, as well. The bust removed, was returned to the British embassy in Washington. However, immediately after Donald Trump took office, the Churchill bust was placed back in Oval Office again.

Trump tried to reset its relations with Britain, but his style of diplomacy, controversy related with his Russian link and Russian President Vladimir Putin’s ambitious strategic approach in European and Middle East affairs followed by President Trump’s withdrawal from Paris climate pact and Iranian Nuclear deal has distanced the US and Europe much farther. This has left a deep sense of insecurity and aloofness among America’s European allies.

Mr. Trump’s strategy of “America first” is considered as a major departure in the US foreign policy and the defense outlook that the United States has been following for decades. Marked as populist, it has invited vehement criticism from various circles, linking it with its toxic past and leaving ‘America alone’.

This way, Mr. Trump has ignored the strategic thinking that made America great and seems to undermine the old bedrock of U.S. grand strategy— that according to Melvyn P. Leffler was “Europe First” – that in essence was the other part of America First strategy.

Besides, Mr. Trump looks more concerned with the price America has been paying for its strategic presence in Europe and wants to retreat from the established strategic principle and practices that America has followed since World War II. His strategy of America First has created a deep sense of mistrust and insecurity among its allies in Europe. Undeniably, Trump Seeking and working with democratic allies around the globe, in safeguarding democracy, freedom has greatly served the most vital interests and values of the United States—abroad and at home.

Present and Past of Cross Atlantic Alliance

The liberal democratic values and international order that the United States and Europe shared and promoted not only sustained the political stability across the Atlantic, it also played a crucial role in maintaining peace, stability, and progress around the world providing the lead role to both America and Europe.

In the core of this partnership was their commitment to their shared values.

What they share in common and how they governed themselves became the common aspirations of humanity and model for governing their country.

Indubitably, seeking and working with democratic allies around the globe in safeguarding democracy and freedom has greatly served the most vital interests and values of the United States—abroad and at home.

The true pillars of American Foreign Policy are the continued strengthening of its relations with its allies in Europe and Asia. With shared values, freedom, democracy, common security and free trade, Mr. Trump, since taking office have abandoned the traditional European strategy and in turn, earned loss for its global stature.

Equally, it is truer that Europeans also need the alliance more than the Americans do for their stability in an ever-changing world since the authoritarian powers with much more economic, political and military strength than the former Soviet Union, have been threatening the basic values and interests that Europe is sharing with America. Therefore, if Europe – tries to distance with America and stand alone, Trump in return can safely ignore Europe and thus the basic foundation on which European security and European integration are constructed will go shattered.

Jeremy Shapiro may not be wrong in his notion that the United States doesn’t need the European alliance for its security, as Trump has implied many times and Europeans too could simply band together and provide for their own security. Because when combined, they create as much economic weight and military power as the United States and far more than any of their potential rivals. However, in practice, they still prefer relying on the United States for their security rather than relying on one another. They have yet to earn strategic confidence on their own for their security – that was exhibited during the military intervention in Libya.

More often, the US President Harry Truman and his Secretary of State George Marshall are considered the main creator of the trans-Atlantic alliance that provided Europe an era of unprecedented peace, prosperity, and security with institutions that promoted and protected those values. However, the real groundwork of this alliance was commenced by Herbert Hoover. Hoover, on behalf of the President Woodrow Wilson administration, had  ensured a smooth supply of food, clothing and other relief aids to war-ravaged Europe. As mentioned by Peter Beinart in The Icarus Syndrome, four million Europeans had written letters or signed petitions thanking him for his brilliant job.

According to Beinart, the people of Finland invented a new verb: ‘‘hoover” meaning ‘‘to help” and in the American lexicon, it meant ‘‘to conserve”.  Hoover had become a national hero in Belgium as he succeeded in feeding 9 million starving people in Belgium and Northern France caught between two warring armies. The impact of his works and success was so tremendous that it gave birth to a new discipline named Relief or Humanitarian Diplomacy. Earlier he had managed the safe return of 100,000 Americans to their homes from Belgium – a country trapped between the fighting armies of Britain and Germany.

Recognizing his success as a great relief administrator and diplomat, President Wilson appointed him as the Head of American Food Administration agency. In this capacity, Hoover encouraged Americans to reduce their consumption of food and other daily essentials in order to ensure the continued supply of those commodities to the Europeans during the war and after the war.

A. Scott Berg,  in his book ‘‘Wilson’’,  has stated that Hoover appealed Americans to observe ‘meatless day’, ‘wheatless day’ and ‘sweet less day’ in order to save food for the Europeans. At the beginning of the War America exported 141 million bushels of wheat and 500,000 tons of sugar and thousands and thousands of tons of meat to Europe. American food saved millions of people in Europe including in the Soviet Union. Quoting renowned Soviet writer Maxim Gorky, William E. Leuchtenburg has written in The American President,  that Hoover had saved from death three and one half million children, five and a half million adults. ‘‘… in the history of practical humanitarianism I know of no accomplishment [to] which in …magnitude and generosity [it] can be compared.” During that time a young Franklin Roosevelt who later became one of the great presidents of his country wished ‘‘we could make him president. There certainly couldn’t be a better one’’, Leuchtenburg states in the aforementioned book.

Keshav Prasad Bhattarai is the former President of Nepal Teachers' Association, Teachers' Union of Nepal and General Secretary of SAARC Teachers' Federation. Currently, he is the Advisor of Nepal Institute for Strategic Affairs (NISS). Mr. Bhattarai has also authored four books -- two of them are about Nepal's Relations with India and one each on educational Issues and Nepal in global Geopolitics.