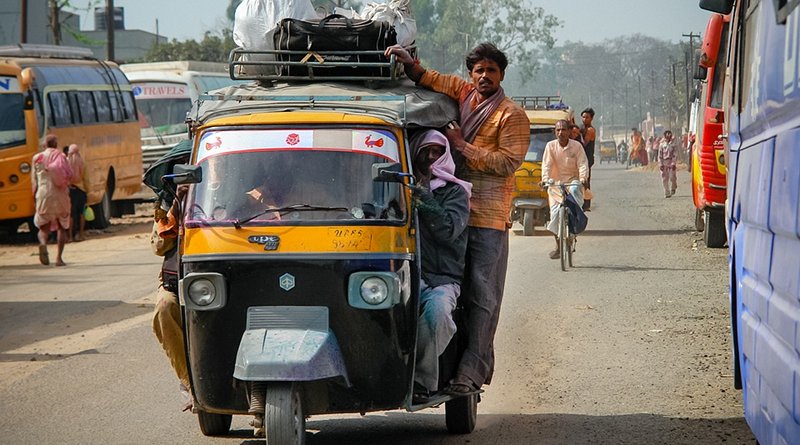 On September 26, 2019, Communist Party of India-Maoist (CPI-Maoist) cadres set ablaze a JCB machine and a dumper truck engaged in road construction in Bhainsadohar village under Chakarbandha Police Station limits in the Gaya District of Bihar. A 10-kilometre road connecting Bhainsadohar village to State Highway-69 was under construction. Chandan Kumar, the driver of the JCB vehicle disclosed, “Around 7-8 armed Naxalites [Left Wing extremists, LWEs] came and pushed me down the JCB vehicle. After that they torched it.” The Maoists also threatened others present at the construction site. The reason behind the attack was non-payment of ‘levy’ (extortion money) by the construction company as demanded by the Maoists.

On September 15, 2019, CPI-Maoist cadres set ablaze one tractor and a JCB machine of a company engaged in road construction in Kutipi village under the Sonua Block (administrative unit) in the West Singhbhum District of Jharkhand. Some posters opposing the road construction were recovered from the spot.

On July 24, 2019, CPI-Maoist cadres attacked the temporary camp of a private road construction firm and killed one of its drivers, identified as Hiralal Baitha, at Khaira Chowk under the Jaitpur Police outpost in the Muzaffarpur District of Bihar. Police disclosed that a group of 10 suspected Maoists barged into the camp office of the road construction firm, which was working on a project for the widening of a stretch of road between Damodarpur village in Kanti Block and Deoria village in Paroo Tehsil (revenue unit) in the Muzaffarpur District, and killed Baitha. The Maoists had demanded ‘levy’ from the construction company.

According to partial data compiled by the South Asia Terrorism Portal (SATP, at least 28 such incidents have been reported from across the country since the beginning of 2019 (data till October 6, 2019). Since March 6, 2000, when SATP started compiling data, at least 254 such incidents have been recorded in the country (data till October 6, 2019).

Disturbingly, out of the 28 such incidents recorded this year at least five resulted in the death of persons engaged in construction or of Security Force (SF) personnel or both. 20 persons have been killed in such incidents: five civilians and 15 SF personnel. Significantly, since March 6, 2000, 16 such incidents resulted in 36 fatalities: 16 civilians and 20 SF personnel. Moreover, of these 16 incidents, at least three were major (each involving three or more fatalities), resulting in 23 fatalities (three civilians and 20 SF personnel). The worst incident took place on May 1, 2019, when CPI-Maoist cadres first set ablaze at least 36 vehicles belonging to a private road construction firm, involved in the construction of a 36 kilometres-long tar road between Purada village in Kurkheda Taluka (revenue sub-division) and Yerkad village in Dhanora Taluka, passing through Dadapur near Lendali Nullah in Jamburkheda village under the Kurkheda Police Station limits in the Gadchiroli District of Maharashtra. When a Quick Response Team (QRT) of C-60, the Maharashtra Police counter-insurgency commando force, reached the place, the Maoist ambushed the team, killing at least 15 SF personnel of the QRT, and a civilian driver.

Alarmingly, the trend data suggests that the number of attacks as well as the resultant fatalities have been highest in the current year. The primary reason for this significant surge is the Maoists’ fear that widening of the road network to far flung areas will increase the Government’s presence in these areas. The Maoists believe that an expanding road network will make such areas better governed and help the State’s outreach.  It would, consequently, result in the further weakening of the Maoist movement, as the rebels lose local support.

The Maoists fear that construction of roads will speed up the movement of security forces and development works in Bastar region, thereby uprooting them. The road connectivity would help villagers, mostly tribals, to avail the benefits of government schemes and directly connect them to the administration. Naxals do not want these roads to be laid. Therefore, they launch attacks on security forces and damage the roads, vehicles and machines used in construction.

In order not to be seen as ‘anti-development’, the Maoists have consequently always alleged that the Government would use this road connectivity to ‘loot’ the tribals. Maoists’ ‘spokesperson’ for the ‘Dandakaranya Special Zonal Committee (DKSZC)’ Vikalp, in an audio clip released on April 27, 2017, declared,

…The roads, railway lines and mobile towers are being constructed for the protection of paramilitary forces and the police in these areas in the garb of providing relief to the common public, but it is being done to loot natural resources, to exploit common masses and to make sure easy transport of security forces (sic). To oppose this open loot and to make sure these resources are used for the welfare of the common public, these retaliatory attacks are being carried out.

On March 11, 2019, after killing one Gupta Swain, a contractor who had bagged the tender for construction of a road from Kukurkund to Temrupalli under the Pradhan Mantri Gram Sadak Yojana (PMGSY) in Kukurkund village under Maithili Police limits in Malkangiri District of Odisha, Maoists of the ‘Bastar Divisional Committee’ of CPI-Maoist, had left some posters voicing their protest against construction of the road. They alleged the Government was constructing the road to loot minerals from the area.

Meanwhile, the Union and State Governments have been making efforts to expand the road network in the Left Wing Extremism [LWE]-affected region, for improving road connectivity in LWE affected States, and to bring development to under developed areas across the country.

According to the Union Ministry of Home Affairs (UMHA) website, Road Requirement Plan-I (RRP-I) Scheme is being implemented by Ministry of Road Transport & Highways for improving road connectivity in 34 LWE affected Districts of eight States i.e. Andhra Pradesh, Bihar, Chhattisgarh, Jharkhand, Madhya Pradesh, Maharashtra, Odisha and Uttar Pradesh. This scheme, approved on February 26, 2009, envisaged construction of 5,422 kilometres roads lengths in LWE affected States, of which 4,825 km roads had been completed as of July 31, 2019. The website also discloses that RRP-II, now known as Road Connectivity Project for LWE Areas (RCPLWEA), scheme was approved by the Government on December 28, 2016, for further improving road connectivity in 44 Districts of nine LWE affected States. This Scheme envisages 5,412 kilometres of roads and 126 bridges. The Ministry of Rural Development (MoRD) is the nodal Ministry for this project. The roads included under the Scheme have been identified by the UMHA in consultation with the State Governments and the security agencies. 845 kilometres of road had been constructed under the scheme till July 31, 2019.

Road construction enables SFs to penetrate deep into the Maoists’ erstwhile ‘safe areas’, even as it allows Government to reach out with improved civil governance and developmental services. It constitutes a complex and potentially terminal threat to Maoist influence in these areas, and will be vigorously resisted. These are precisely the reasons why it is imperative that these projects continue at an even more accelerated pace.