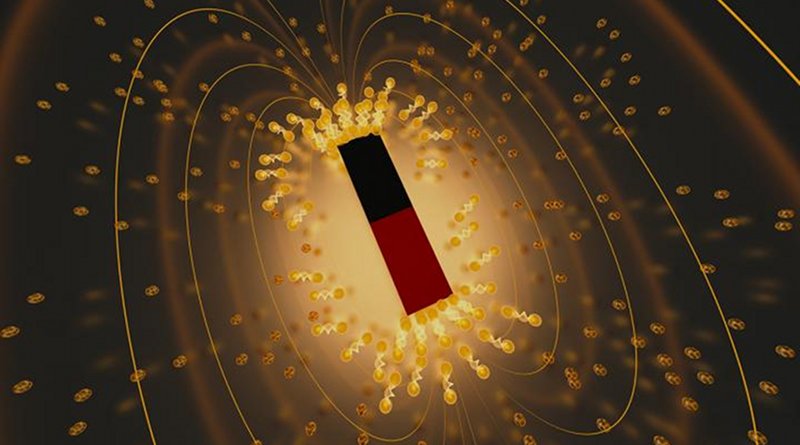 A team of researchers has observed a rare phenomenon called re-entrant superconductivity in the material uranium ditelluride. Nicknamed "Lazarus superconductivity," the phenomenon occurs when a superconducting state arises, breaks down, then re-emerges in a material due to a change in a specific parameter--in this case, the application of a very strong magnetic field. The discovery furthers the case for uranium ditelluride as a promising material for use in quantum computers. Credit: Emily Edwards/JQI

Researchers from the University of Maryland, the National Institute of Standards and Technology (NIST), the National High Magnetic Field Laboratory (NHMFL) and the University of Oxford have observed a rare phenomenon called re-entrant superconductivity in the material uranium ditelluride. The discovery furthers the case for uranium ditelluride as a promising material for use in quantum computers.

Nicknamed “Lazarus superconductivity” after the biblical character who rose from the dead, the phenomenon occurs when a superconducting state arises, breaks down, then re-emerges in a material due to a change in a specific parameter–in this case, the application of a very strong magnetic field. The researchers published their results, in the journal Nature Physics.

Once dismissed by physicists for its apparent lack of interesting physical properties, uranium ditelluride is having its own Lazarus moment. The current study is the second in as many months (both published by members of the same research team) to demonstrate unusual and surprising superconductivity states in the material.

“This is a very recently discovered superconductor with a host of other unconventional behavior, so it’s already weird,” said Nicholas Butch, an adjunct assistant professor of physics at UMD and a physicist at the NIST Center for Neutron Research. “[Lazarus superconductivity] almost certainly has something to do with the novelty of the material. There’s something different going on in there.”

The previous research, published in the journal Science, described the rare and exotic ground state known as spin-triplet superconductivity in uranium ditelluride. The discovery marked the first clue that uranium ditelluride is worth a second look, due to its unusual physical properties and its high potential for use in quantum computers.

“This is indeed a remarkable material and it’s keeping us very busy,” said Johnpierre Paglione, a professor of physics at UMD, the director of UMD’s Center for Nanophysics and Advanced Materials (CNAM; soon to be renamed the Quantum Materials Center) and a co-author of the paper. “Uranium ditelluride may very well become the ‘textbook’ spin-triplet superconductor that people have been seeking for dozens of years and it likely has more surprises in store. It could be the next strontium ruthenate–another proposed spin-triplet superconductor that has been studied for more than 25 years.”

Superconductivity is a state in which electrons travel through a material with perfect efficiency. By contrast, copper–which is second only to silver in terms of its ability to conduct electrons–loses roughly 20% power over long-distance transmission lines, as the electrons bump around within the material during travel.

For Butch, Paglione and their team, the discovery of this rare form of superconductivity in uranium ditelluride was serendipitous; the study’s lead author, CNAM Research Associate Sheng Ran, synthesized the crystal accidentally while attempting to produce another uranium-based compound. The team decided to try some experiments anyway, even though previous research on the compound hadn’t yielded anything unusual.

The team’s curiosity was soon rewarded many times over. In the earlier Science paper, the researchers reported that uranium ditelluride’s superconductivity involved unusual electron configurations called spin triplets, in which pairs of electrons are aligned in the same direction. In the vast majority of superconductors, the orientations–called spins–of paired electrons point in opposite directions. These pairs are (somewhat counterintuitively) called singlets. Magnetic fields can more easily disrupt singlets, killing superconductivity.

Spin triplet superconductors, however, can withstand much higher magnetic fields. The team’s early findings led them to NHMFL, where a unique combination of very high-field magnets, capable instrumentation and resident expertise allowed the researchers to push uranium ditelluride even further.

At about 16 teslas, the material’s superconducting state abruptly changed. While it died in most of the experiments, it persisted when the crystal was aligned at a very specific angle in relation to the magnetic field. This unusual behavior continued until about 35 teslas, at which point all superconductivity vanished and the electrons shifted their alignment, entering a new magnetic phase.

As the researchers increased the magnetic field while continuing to experiment with angles, they found that a different orientation of the crystal yielded yet another superconducting phase that persisted to at least 65 teslas, the maximum field strength the team tested. It was a record-busting performance for a superconductor and marked the first time two field-induced superconducting phases have been found in the same compound.

Instead of killing superconductivity in uranium ditelluride, high magnetic fields appeared to stabilize it. While it is not yet clear exactly what is happening at the atomic level, Butch said the evidence points to a phenomenon fundamentally different than anything scientists have seen to date.

“I’m going to go out on a limb and say that these are probably different–quantum mechanically different–from other superconductors that we know about,” Butch said. “It is sufficiently different, I think, to expect it will take a while to figure out what’s going on.”

On top of its convention-defying physics, uranium ditelluride shows every sign of being a topological superconductor, as are other spin-triplet superconductors, Butch added. Its topological properties suggest it could be a particularly accurate and robust component in the quantum computers of the future.

“The discovery of this ‘Lazarus superconductivity’ at record-high fields is likely to be among the most important discoveries to emerge from this lab in its 25-year history,” said NHMFL Director Greg Boebinger. “I would not be surprised if unraveling the mysteries of uranium ditelluride leads to even stranger manifestations of superconductivity in the future.”