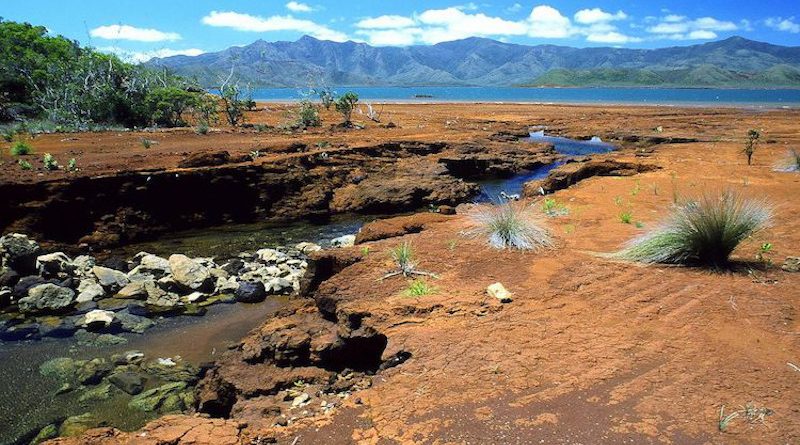 A creek in southern New Caledonia. Red colours reveal the richness of the ground in iron oxides and nickel.) CC BY 2.5

Voters in the South Pacific Islands French colony of New Caledonia have narrowly voted to remain with French rule, but indigenous Kanaks have been celebrating the outcome of October 5 vote as taking a step closer to independence. A third referendum needs to be held in two years’ time under the Noumea Accord, and they feel that majority of voters would then vote for independence.

Kanaks are an indigenous Melanesian race that has settled in the islands 3,000 years ago.  Ethnographic research has shown that Polynesian seafarers have intermarried with the Kanaks over the centuries.

New Caledonia was annexed to France in 1853 and became a French overseas territory in 1956. The cluster of islands known as New Caledonia consists of one of the largest landmasses in the Pacific Ocean, and it boasts about 25 per cent of the world’s nickel resources.

With the islands nickel industry taking off in the 1960s the French authorities brought migrants from France and Asian countries such as Vietnam, Indonesia and Japan in a bid to outnumber the indigenous Kanaks. In the 1970s the Kanak and Socialist National Liberation Front (FLNKS) was formed for seeking independence. The main concerns of FLNKS were immigration and the redistribution of nickel revenues.

The leaders of the newly independent South Pacific Island who have formed the South Pacific Forum supported FLNKS’s quest for independence. With New Caledonia virtually in the civil war, in 1986, Pacific Island states successfully secured unanimous support in the UN General Assembly – over France’s opposition and abstention – to relisting New Caledonia as a non-self-governing territory subject to UN Decolonisation Committee oversight.

After a decade of uneasy peace, the French State, loyalist and independence parties signed the Noumea Accord on May 5, 1998. The Accord for the first time acknowledged the Kanak identity as having been under attack by colonisation. It also prescribed a three-stage process towards possible independence with referendums in 2018, 2020 and 2022.

In the Sunday’s second referendum vote, 53.3 per cent voted “No” for independence and 46.7 percent said “Yes”, with most of the “Yes” vote coming from urban centres such as the capital Noumea. With the regions enjoying a lot of autonomy, the Kanak’s seem to smell success in overturning this verdict in a 3rd referendum expected in 2022.

As results were announced late on Sunday (local time), pro-independence leaders and their supporters burst into celebration in apparent defiance of their loss, waving pro-independence flags and blowing horns. “My first reaction is one of great joy,” Aloisio Sako, a pro-independence leader, told Australia’s ABC network, pointing to a 4-point increase in the Yes vote compared to the 2018 referendum.

This euphoria was reflected in FLNKS’s Facebook page where supporters have posted videos of their celebrations in the streets. “Congratulations on your mobilization,” said BNG Francia in a message on the Facebook page.

“Results show that the ‘Not’ prevails in the capital but not necessarily elsewhere.” Gamora Rwxoju congratulated their youth for mobilizing the “yes” vote. “Don’t be discouraged, we have improved, this is good news,” said Bucen Yknk in another post. “The fight continues and must look for more improvement for 2022.”

Radio News Zealand Pacific’s Walter Zweifel says that the pro-French constituency would argue that people have voted to stay a colony and let’s go on with it. But he believes that the pro-independence constituency will be adamant that the Noumea Accord should be adhered to and a 3rd referendum be held in 2022.

“They feel that if they cannot get independence through the Noumea Accord, they would like bilateral talks with Paris on the way forward,” he adds. “What could be expected is a flurry of activity and re-engagement of France in this process?”

In a statement issued from Paris, French President Emmanuel Macron says all the national political forces will have to draw up their vision of the future of New Caledonia, and if formally requested he would help to organize a 3rd referendum.

France’s overseas territories minister Sebastien Lecornu is due in New Caledonia for a three-week stay – which will include two weeks in isolation in line with the territory’s Covid-19 policies.  He will meet key leaders from all sides.

Australia’s Lowy Institute’s Denise Fisher argues that strategic stakes are high for France in New Caledonia and they have sharpened their rhetoric in the lead up to the October 5 referendum implying a French role in New Caledonia is important as a counterbalance to China in the Pacific.

“France’s Pacific territories underpin its global leadership claims in the United Nations, in Europe and as a United States ally, bestowing privileged sovereign access to regional consultation tables as the Pacific overtakes the Atlantic in geostrategic importance,” noted Fisher in an article published before the referendum.

“Its Pacific territories’ extensive exclusive economic zones alone make France the world’s second maritime nation after the United States. New Caledonia is the jewel of France’s overseas possessions, its regional military headquarters, base for scientific research, and site of strategic mineral reserves including nickel, chrome, cobalt and hydrocarbons, the latter shared with Australia with whom France has enhanced its defence links.”

Australia’s Foreign Minister Marise Payne in a press release welcomed the referendum verdict describing it as a victory for “self-determination”. It recognizes “the efforts, both of the French government and of the New Caledonian leaders who have enabled New Caledonians to determine their own future “, she argued. “Australia , attaches great value to its close relationship with France as a partner, carrying the same values within the Indo-Pacific region” she added. “We welcome France’s constant involvement in the Pacific (and) its considerable contribution to the security and prosperity of the region. “

Australia, which is currently at loggerheads with China, would like the support of an European ally to wean Pacific Island nations away from Chinese influence. New Caledonia’s nickel industry would be a focus.

An independent New Caledonia would depend on income from nickel for its economic prosperity. Kanak leaders in recent years have supported moves to diversify New Caledonia’s nickel industry investments by including China.

Australia and Japan have been the major players in the industry until recently. In 2015, Kanak truck drivers went on strike blocking strategic points in the transport of nickel from the mines to the port. Drivers called for new exports of nickel to China to save their jobs. This divided the political establishment in the islands and a vote in the 54-member Congress opened the door to exports to China.

Last year, the loss-making Brazilian owned nickel mine Vale was put up for sale and in December New Caledonia’s southern province president Sonia Beckes said that they will have no other choice than selling it to a Chinese buyer. French authorities are keeping an eye on attempts by China to expand its commercial activities in New Caledonia, the same way they have done in neighbouring Vanuatu and Fiji.

The pro-independence Northern Province leaders, who have traditionally favoured local processing, have recently done deals with Korean and Chinese companies, which worries the French (and possibly Australians).

“The stakes are high in the nickel industry,” argues Fisher. “Nickel resources have been at the heart of the independence debate. Parallel nickel ‘re-balancing’ arrangements were fundamental in securing the cooperation of pro-France and pro-independence supporters to end the 1980s civil war.