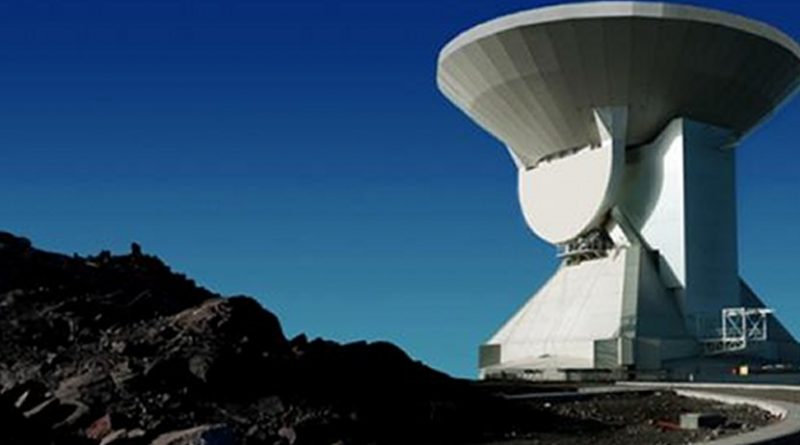 Astronomers at UMass Amherst and in Mexico, using the Large Millimeter Telescope located on the summit of a 15,000-foot extinct volcano in Mexico's central state of Puebla, have detected the second most distant dusty, star-forming galaxy ever found in the universe, born witin the first one billion years after the Big Bang. It is the oldest object ever detected by the LMT. Credit: UMass Amherst

Astronomers using the Large Millimeter Telescope (LMT), which is operated jointly by the University of Massachusetts Amherst and Mexico’s Instituto Nacional de Astrofísica, Óptica y Electrónica, report today in Nature Astronomy that they have detected the second most distant dusty, star-forming galaxy ever found in the universe – born in the first one billion years after the Big Bang.

It is the oldest object ever detected by the LMT, says astrophysicist Min Yun at UMass Amherst, and at present there is only one other, slightly older and more distant object like this known.

He adds, “This result is not a surprise, because this is what the LMT was built to do, but we are very excited. These high redshift, very distant objects are a class of mythical beasts in astrophysics. We always knew there were some out there that are enormously large and bright, but they are invisible in visible light spectrum because they are so obscured by the thick dust clouds that surround their young stars. Paradoxically, the most prolific star-forming galaxies and thus the most luminous are also the most difficult to study using traditional optical telescopes like the Hubble Space Telescope because they are also the most obscured by dust.”

“Determining the extremely high redshift of this object with millimeter waves is a highlight result from the LMT, which can see through the dust in the radio- and millimeter- wavelengths,” he notes. “Its ability to study these very distant objects is one of its most outstanding abilities, almost unique in the world.”

The new object was first detected by astronomers using the Herschel space telescope, but for such distant objects, that instrument can take only “very blurry pictures that yielded almost no information,” Yun notes. So Herschel astronomers passed their information on to LMT director David Hughes, knowing that the new instrument in Mexico is the best in the world to confirm it. Hughes’ graduate student at the time, Jorge Zavala, now a postdoctoral research fellow at the University of Texas, is first author of the new paper.

The LMT, located on the summit of a 15,000-foot extinct volcano in Mexico’s central state of Puebla, began collecting its first light in 2011 as a 32-meter millimeter-wavelength radio telescope. It has since been built out to its full 50-meter (164-foot) diameter and when fully operational this winter it will be the largest, most sensitive single-aperture instrument of its kind in the world. It is expected to be at the forefront of new discoveries about the oldest, most distant objects in the universe.

Yun, one of the world’s experts in analyzing data from such objects, explains, “The way we can tell this object is very distant is by measuring its redshift, which is a measure of the universe’s expansion speed. More distant objects have a larger redshift. To measure redshift, you use a spectral line of atoms or molecules, each of which has a recognizable, discrete signature or fingerprint. Historically we measured this in visible light, but because you cannot see these very old, distant dusty objects with visible light you have to do something else.”

In the millimeter wavelength, one of the most common and easily detected spectral lines is that of carbon monoxide (CO), which the LMT was designed to trace, he points out. For independent confirmation of the large redshift they observed, Zavala, Yun and colleagues enlisted the help of astronomers at the Harvard-Smithsonian Center for Astrophysics to make additional observations using the Smithsonian Submillimeter Array telescope on Mauna Kea, Hawaii. That triangulation allowed the researchers to create a more detailed image of the new object, referred to as G09 83808, and to confirm its redshift with a carbon emission line.

Further, Yun says, a phenomenon called gravitational lensing, which magnifies light passing near massive objects as predicted by Einstein’s theory of general relativity, came into play in this study. A huge galaxy between observers on Earth and object G09 83808 acted as a giant magnifying glass and made it look about 10 times brighter and closer than it is, he notes.

With the LMT coming fully online in the next couple of months, Yun says its higher resolution and higher sensitivity means “we can find really, really faint things. They are essentially at the very edge of the universe, so the higher resolution is important because with poor resolution everything looks blended and you can’t pick out that very small and faint but extremely interesting objects like this galaxy.”

“Now, it could be that there are a whole bunch of them out there and we haven’t been able to see them, but with the LMT we have the power to see them. Maybe they’ll start popping out,” he adds. “We are in the discovery field. Every time I reduce one of these data sets I’m full of anticipation. I’m always hoping that these things will pop out. You have to be a hopeless optimist to be doing this kind of work, and this time it absolutely paid off.”

Home » Astronomers Observe One Of Oldest Objects In Universe